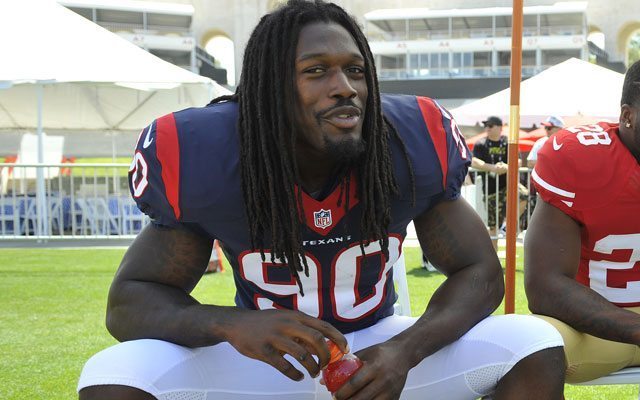 His rookie season in 2014 was undone by injuries … and the Texans have been easing him back into action this season after he underwent a risky microfracture surgery on his right knee last December.

If Sunday night’s game in Houston against the New England Patriots was any indication, though, Clowney is going to be well worth the wait.

The 6-foot-5, 266-pound outside linebacker sacked future Hall-of-Fame quarterback Tom Brady twice – once against a double team – en route to recording his first career multi-sack performance in the NFL.  Clowney also made several plays in the New England backfield – including a pair of tackles for loss – giving fans a glimpse of the sort of disruptive ability that defined his collegiate career at the University of South Carolina.

(You remember that disruptive ability, right?)

Anyway, here’s a look at some highlights from Clowney’s big night …

We love seeing Clowney back at full speed … although our founding editor (a longtime Indianapolis Colts fan) probably wishes it wasn’t happening right now.  Houston travels to Indianapolis for a pivotal AFC South showdown this coming Sunday at 1:00 p.m. EST.

Wait, wait, wait, he had that risky surgery and will never play again and he is lazy and he was overrated and…

And he sets Brady down so gentle. What a nice guy:)

Sad to see how many people trash Clowney and actively hopes he flops in the NFL. Just sad.

That’s because of how jealous of him they are. Even if he does flop he has already made more money than any of them will ever make and they know it.

You mean not everyone is going to make $9 million? Odds are he’ll end up broke in 10 years like so many before him.

I just have so much jealousy I must write the same thing every time some one mentions him. Its all that I have in my life, and it makes me feel like the big boy my mommy always said I was. This year I can sit at the big boy table at Christmas, as long as I don’t poop my pants again.

If you’re going to mock me, at least don’t cut and paste. That’s just lazy.

What are you talking about?

Between the Dad in the news, the injuries, and the alleged lack of work ethic, it was not looking good. Good on him for making lemonade out of lemons. Busting Brady’s ass is extra gravy on top.

Yeah, he played a good game…looks like he knocked some air out of Brady’s balls.

What is it with your fixation on the male private parts i.e.” “balls and pricks”. No wonder you use your dumb dawg as your sign in logo. Perhaps you might be into animals as well? Get a life boy.

To quote your pal Ronald Regan,”there you go again”. You certainly do have a fixation for male private parts. And really, can’t you come up with something more original and funny than ” sit Fred sit”? I must say the only thing that’s entertaining and funny are your inane posts and retorts.

The library hasnt kicked your sorry ass out. go cleanup your cardboard box.

Watch Clay Matthews and get back with me in say 60 games/5 years.

That’s what makes those who want to end college football, so dumb. The Gamecocks were getting Clowney for a fraction of that. What a great deal for the state.

Who wants to end college football?

Or are you referring to taxpayer money paying for it?

How much did they get for an upset tummy?

You really are envious of him aren’t you? From the looks of you we can see why

Are you peeking in my windows?

I didn’t know your double wide had windows.

Ole Miss defensive lineman Robert Nkemdiche has been charged with marijuana possession as a result of his fall from a forth floor hotel window, the Atlanta Police Department announced Monday.
He is in stable condition at Grady Memorial Hospital.

I can only comment on articles about USC or Black people as I feel the need to mention derogatory things about both of them to make myself feel better, so this story makes me happy as it has to do with both! It really is the only thing in the world I have. I really am that pathetic.

He has very feminine features . i want to see his tootsie roll

I wanna see the clempsun fan who got the dabo tattoo on his thigh. c’mon fits chop chop