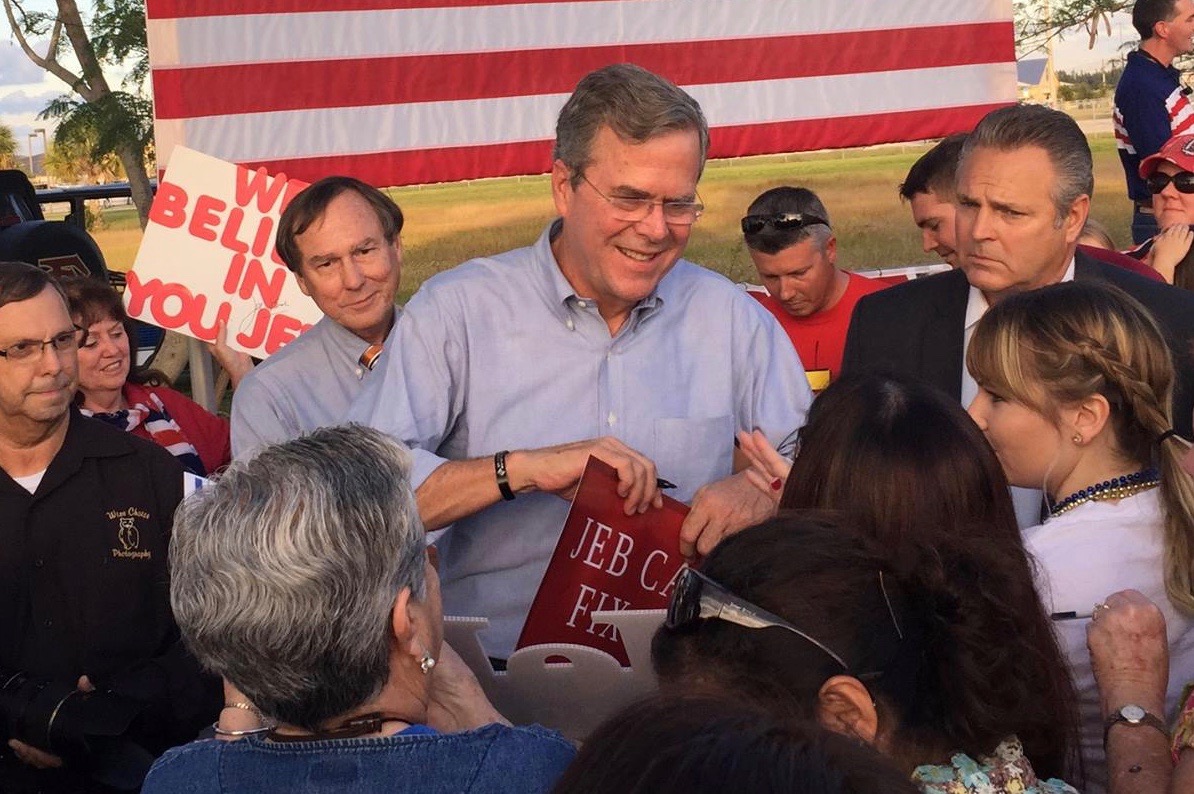 The flailing presidential campaign of former “Republican” frontrunner Jeb Bush will get a boost this week when it announces the endorsement of a leading GOP State Senator in early-voting South Carolina.

Sources won’t confirm the identity of the Senator prior to a press announcement on Tuesday, but we’re told it could be first-term Senator Katrina Shealy – who until recently was the lone female member of the state’s 46-person S.C. Senate.

That would make sense given Shealy’s advocacy on behalf of parental choice – one of the few areas where the former Florida governor has a better free market record than most of his “Republican” opponents.

Bush’s campaign has been in a free-fall of late, and it encountered additional gravity during last week’s GOP debate.  There, U.S. Senator Marco Rubio of Florida – once Bush’s understudy – deftly deflected his former mentor’s criticism of his absenteeism in the U.S. Senate.

Along with Wisconsin governor Scott Walker – who ditched his 2016 bid last month – Bush was one of the early frontrunners in the Palmetto State’s “First in the South” presidential primary.

Can he get his bid back on track?

We’re not sure … but the addition of Shealy to his team obviously won’t hurt.  She’s one of the hardest workers in state government, and she knocked off a favored incumbent back in 2012 – as a petition candidate.

I wonder who Ms. Graham is going to endorse after he’s done with his pretty pony show.

“I’m more intested in seeing if Nikki Haley blows Jeb! the…..” – we’ve got an app for that.

You seem to forget Margie Bright Matthews was sworn in last week.

You can’t read dumb ass – it said until recently!! I can tell you are a Dem..must have went to a public school where they didn’t teach reading

‘Jeb’ needs to hang it up…….no one wants another Bush!

“But I didn’t use my last name on my campaign banners!”-Jeb Bush, GOP primary loser

“Sources won’t confirm the identity of the Senator prior to a press announcement on Tuesday, but we’re told it could be first-term Senator Katrina Shealy – the lone female member of the state’s 46-person S.C. Senate.

That would make sense given Shealy’s advocacy on behalf of parental choice – one of the few areas where the former Florida governor has a better free market record than most of his “Republican” opponents.”

That would figure, given Katrina’s wavering, RINOistic leanings and other damnfoolery attributed to her in recent years. If true, it is one more reason we need to can Katrina in 2016. Surely we have a viable contender who will come forward to unseat her before her butt becomes as solidly glued to OUR seat as Jake’s was when she came along.

And what would those Rhino leanings be or other damnfoolery? You always act so smart but know nothing – no one in the State Senate works harder than Shealy and you know it. And if it’s your seat why don’t you get some balls and run – you seem to run your mouth but never do any work. Anyone can bitch and not work but all you do is bitch!

Hello troll! I don’ t run because our system has been corrupted to where you have to have lots of money to even think about winning.

Katrina seems to have grown quite comfortable in her position as Larry Martin and Greg Hembree’s lap dog. I doubt a majority in her district would have voted for either, but Greg and Larry’s wishes seem to be what Katrina most represents.

Now if I could politely ask a favor of you, GO FUCK YOURSELF!!!!!

Ohhhh potty mouth aren’t we now! You don’t own the Internet! And who the hell do you think you are anyway – I don’t think Katrina even likes Martin and Hembree – you like to talk like you know her so well. You are almost funny. And such a sensitive little prick at that!

Neither do you, dipstick. I know who I am. Who do you think you are, troll.

For the last two or three legislative sessions, she has let those two lead her around by the nose, apparently with them shoeing her how the art of “go along to get along”, rather than standing on principle, works. I read, I observe, I learn, about those I may be casting a vote for, or against.

and here the SCDP calls Margie Bright the second woman in the SC State senate… oh well, Dems to tend to guess and mis-speak as to the lascivious and libelous.

Didn’t we once read that Catherine Templeton was big into the Bush campaign in SC?

I hope Jeb is just before the “stick a fork in him , he is done” stage of the campaign. We don’t need or want any more establishment RINOs. About the lower tier should hang it up. As much as I like Huckabee, he has about had it as well. Katrina has been trending moderate much to the consternation of those of us who worked to get her elected. She is still my favorite senator but the soft spot on my office wall is getting used more and more. LOL