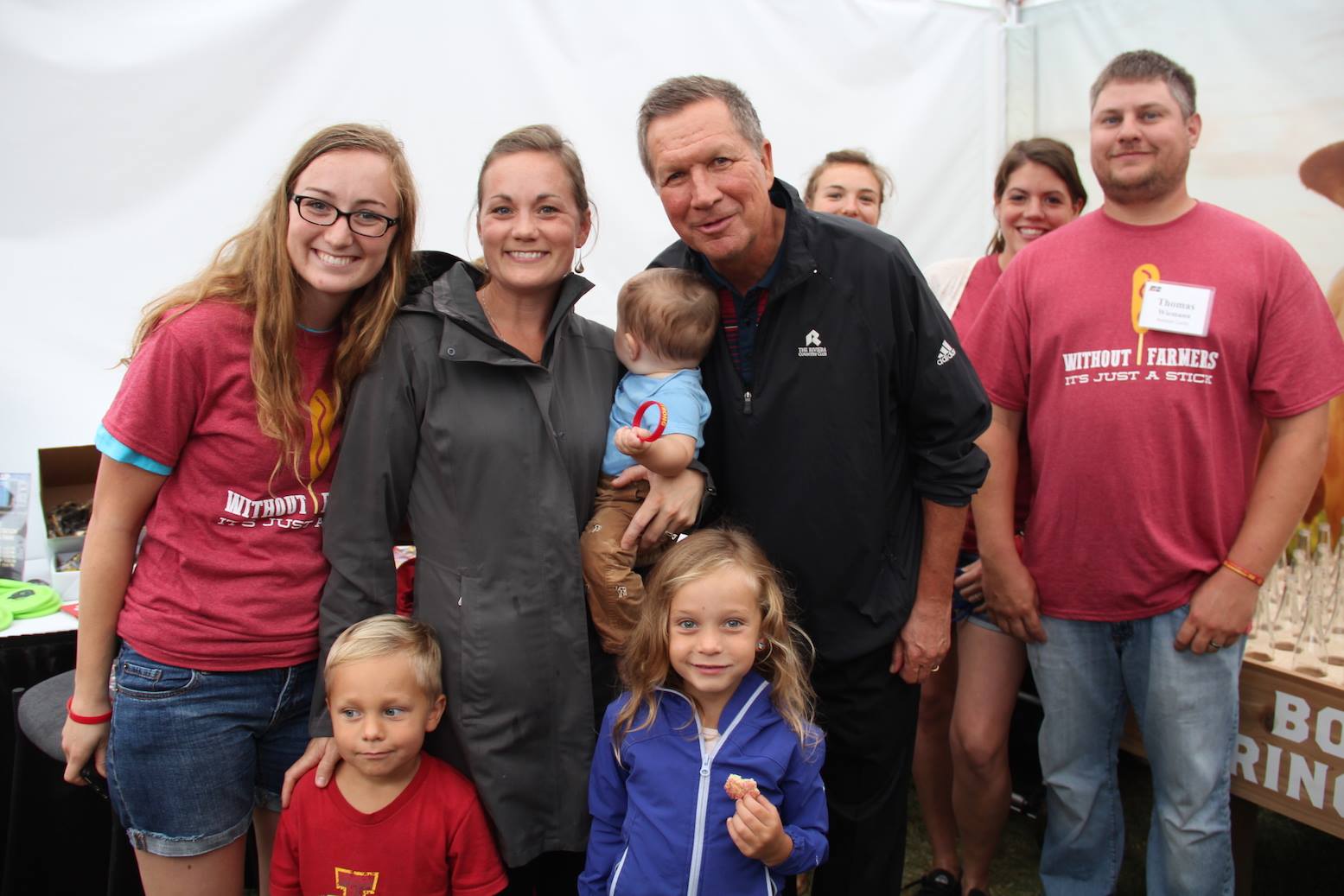 || By FITSNEWS || Ohio governor John Kasich – who has successfully broken into the second tier of “Republican” presidential candidates – is touting the endorsement of Alabama governor Robert Bentley.

“This is a big deal,” Insiders’ Ed Rogers wrote.

“Bentley’s endorsement of Kasich suggests something thoughtful on his part,” Rogers continued.  “Kasich is a thinking person’s candidate. And for Bentley to give him his support at this point in the race proves that Alabama and other Southern states are competitive ground for the entire GOP field.”

Kasich’s Bentley endorsement was rolled out on the same day he filed his paperwork to compete in South Carolina’s “First in the South” presidential primary – and announced his new Palmetto chairperson.

He’s also been palling around with U.S. Rep. Mark Sanford – who (like Kasich) used to be one of the good guys in the U.S. Congress.

(How times have changed).

And that’s our fundamental issue with Kasich’s candidacy: It’s not where he’s from, it’s that he’s not the guy he used to be.

“During the mid-to-late-1990s, Kasich and Sanford were the genuine articles … budget-hawking, liberty-loving lawmakers who lent ideological legitimacy to the 1994 ‘Republican Revolution,'” we wrote earlier this summer.

“(Both) have become pure status quo ‘Republicans’ – the embodiment of everything they once railed against,” we wrote.  “Plus they both incessantly invoke the divine in rationalizing their ideological betrayals.”

He talks a good game, but underneath his crisp, un-halting rhetoric and enviable command of budget numbers is a truth we can’t (and you shouldn’t) ignore: Kasich is a fiscal liberal.

Twenty years ago – when he was in Washington, D.C. standing up to status quo politicians (like the one he’s sadly become) – Kasich would have been among our top choices for president.

Today?  We would advise voters (especially those in South Carolina) to look elsewhere …

Like Sanford, did Kasich philander around too? Or am I mistaking him with Morning Joe Scarborough? Is an endorsement from Sanford a net positive or net negative…or is anybody who is a somebody is a nobody who cares?

No, that would be morning Joe, who also has the Gary Condit problem.

No.Kasich is a strong Christian, family man that has not had an affair… is pro-life and has introduced some of the strongest legislation in the country to make abortion more difficult to obtain in Ohio…he is for building a Wall and shutting the border down…NO path to citizenship or amnesty until all of that is done…unions hate him but respect him(he saved many municipalities from bankrupcy) for his stand on public sector unions. You will now work 35 years and be 65 in Ohio before the taxpayers give you a pension.

Made a mistake by expanding Medicaid under Obamacare and had to raise taxes and cut services.

WON Cuyahoga County (Cleveland) in a county where Obama typically gets 125% of the vote and got 27% of the black vote in 2014.

People love or hate Kasich.He tells it the way it is.

Sanford and Kasich are identical twins in regards to how they approach politics. Their faith guides them.

I actually really like him. I think he’s better than Jeb, is moderate and will be able to attract people across the spectrum. I think he connects with voters, his own history is one of hard work, and sacrifice. There’s nothing about Kasich to tell me he would be no less that a good President. And I’m a Democrat. We’ll see how he responds to the deport ’em all thing. If he comes out forcefully and says Trumps idea is just bunk, he’ll vault to the top. If he stays weak like Rubio and Bush have, then he’ll suffer. He’s probably the guy best set to take Trump on.

I agree Rocky…I am a moderate Democrat but like Kasich. He may be conservative but seems to put the interests of his constituents over Republican party orthodoxy. I think he has the best chance to give the Dem’s a real run for their money in the election and for that reason hope he isn’t nominated by the GOP. Kasich would probably carry Ohio and no Republican has won the presidency in recent times without doing that. He definitely scares me the least of the GOPer’s.

He stands out from the GOP crowd precisely because he’s not crazy but rational, which is a drawback with the GOP’s idiot “base.”

He really is no different than Walker. He tried to gut unions, but his initiative was put out to a referendum and he lost- badly. He was in lock step with Newt Gingrich when he was in Congress.

Flip likes to cite his re-election, but his opponent’s campaign completely collapsed and stopped campaigning weeks before the election.

Just because he went to a gay wedding doesn’t mean he is actually a moderate.

If he can kick you off the public dole I will give him a look. I am tired of paying for you.

I do very well Jack and getting ready to resume much traveling after an illness.

Thank you for your kind words.

How much did I have to pay ?

Ugh, I was interested until that last line…. Sanford uses his “religion” as a get out jail free card, and as part of his fan dance in front of his constituents.

What’s his email address? I’ll check to see if he’s on the dump from Ashley Madison.

Isn’t he one of the Koch suckers ?

He’s not even on my electoral radar.

Ohio. That’s where US House Speaker John Boehner is from. That’s were most violent rapist are from, too.

He is not a criminal like a Hillary or a Obama/Stalin/Chavez like Sanders…that is why you have never heard of him.

Pretty sure his abysmal rankings in the polls is why we’ve never heard of him.

Him expanding Medicaid is probably why you’ve heard of him, Freeloader Flip.

Only in never never land, is Kasich a fiscal liberal. Kasich is considered a liberal to pointy headed Libertarian think tank weirdos who are just as much a part of the D.C. establishment, as any other pimped out special interest group, who likely sponsored this attack piece.

It is also false to accuse him of this worn out cliche: “Plus they both incessantly invoke the divine in rationalizing their ideological betrayals.”

Just because you hate Sanfraud, who is a worthless scumbag, you shouldn’t blithely transfer that disgust onto an undeserving Kasich.

This is what he said about that: “There’s a morality of — why would you want to lock a schizophrenic or a
bipolar person in a prison cell? That’s not what America is,” he said.
“You know, I don’t like read a Bible to figure out what I think. But I
have a heart for people.”

The facts are that Kasich is governing well in Ohio, and that expanding Medicaid was the right thing to do for Ohio, to provide medical services to people otherwise would go untreated. That’s not ideological, that is common sense, given the facts present when you actually have to govern, vs. running off at the mouth on fascist like demands for ideological (as opposed to ethnic) purity.

If you want to keep the White House out of the hands of Democrats for 4 more years, then Kasich should be on the GOP ticket, he knows how to win elections in Ohio. And the GOP cannot with the White House without winning Ohio.

Winning is all that matters.

Kasich is far from a ‘fiscal’ liberal.Ask the unions in Ohio.Medicaid expansion was a mistake however he believed his ‘faith’ dictated helping those in need.

But it wasn’t a mistake. And it’s ultimate impact on Ohio has been positive.

Yes, Kasich cares about poor people, which is something we can’t say about our own governor.

Haley was smart not to expand Medicaid. It would have sunk the state.

She did that on her own in Savannah.

It was indeed a mistake.It was 1.4 BILLION in the red until he raised taxes and cut services.It could bankrupt the state if not reigned in.

Nobody is taking the ‘new’ Medicaid insurance under Obamacare and NO doctors.

People really don’t have insurance and are using the emergency room in mass.

How do you know that ?

Probably because he is smarter than you.

I read and speak with my doctor about this. He is actually quitting because of Obamacare.

How do you know so much about being insane?

An Obama Nuclear deal with Iran

A Palestinian on a motorcycle

That was fucking awesome, Jim!!!!

He makes it the Bama way, dripping with b.s..

Kasich is a mushy middle moderate with half a brain. He would be better than about half the Republican lineup but remember he voted for Clinton’s assault weapons ban. I can like and respect him as a leader but can’t trust him not to fall for the big govt./ anti gun crowd if the opportunity presented itself. With candidates like Trump, Walker, Huckabee , Carson and Cruz why bother with Kasich ?

Good points.He is shrewd like Sanford in a political sense…a plus