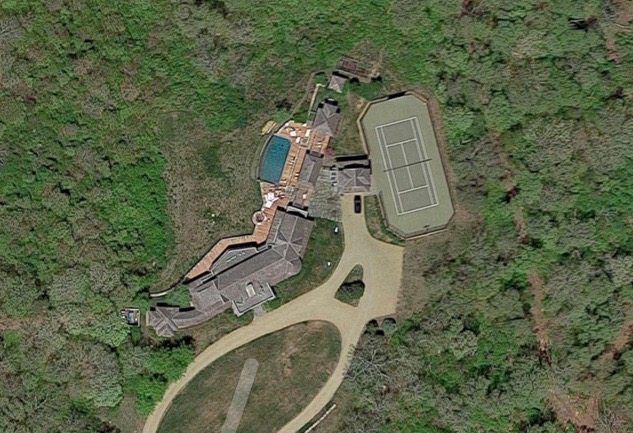 || By FITSNEWS || U.S. president Barack Obama will take a two-and-a-half week break from his ongoing efforts to lead America “forward.”

Or whatever his 2012 reelection slogan was … (more black-on-black crime?)

Anyway, Obama and his family will travel to a secluded 8,100-square-foot mansion in Martha’s Vineyard, Massachusetts.  The $13 million estate (above) features nine bedrooms, seven bathrooms, an infinity pool and hot tub, a dual tennis court/ basketball court and an indoor gym.

It rents for $50,000 a week … which is roughly what the average American makes in a year.

Of course Obama won’t be spending all of his time inside the mansion – which is owned by the widow of a former General Electric executive – or enjoying the scenic views of the Vineyard Sound it affords.

“The president can be expected to spend plenty of hours working on his golf game,” ABC News reported.

We don’t begrudge Obama for taking a week off … well, two-and-a-half weeks off.  We begrudge him when he’s on the job.

… Obama has taken George W. Bush’s failed (and hypocritical) big government approach to everything and put it on steroids – with predictable results.

Whereas Bush was a “default setting” statist, Obama has aggressively expanded statism in America – and done so at an incalculable cost to our liberty, our prosperity and our constitutional form of government.

Whereas Bush was blindly “going along to get along” with the Washington establishment … Obama is dangerously and deliberately expanding it, using it as a weapon to attack everything which once made America great.

In other words enjoy your vacation, dude.  Don’t be in a hurry to come back …

Obama departed for Martha’s Vineyard hours after a report revealed 93.8 million working age Americans were not participating in the labor pool … and one day after the Atlanta Federal Reserve’s initial current GDP estimate for the third quarter clocked in at an anemic one percent growth rate.

In fact buried within a recent White House mid-year economic forecast (.pdf here), Obama’s administration acknowledged it does not expect the economy to grow above a three percent rate for the next ten years.

What Donald Trump’s Rise Says About The GOP