|| By FITSNEWS ||  Former Hewlett Packard CEO Carly Fiorina – the only woman seeking the “Republican” presidential nomination – was on the offensive this weekend.

In an interview with reporter Hadas Gold of Politico, Fiorina took a break from exclusively bashing presumed Democratic presidential nominee Hillary Clinton and took some swipes at one of her GOP rivals – former Florida governor Jeb Bush.

“We have festering problems in Washington, D.C,” Fiorina said. “The power, the weight, the complexity of government is literally crushing the potential of this nation.  Given those festering problems for both Republicans and Democrats over decades, I think my question to Gov. Bush would be, why do you think you are the Bush who can change that?” 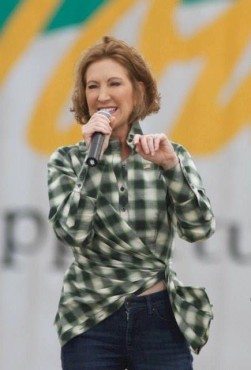 That’s a good question … and it echoes some of the skepticism we’ve had of Bush’s so-called “reform” proposals.

Along with South Carolina governor Nikki Haley, Fiorina is viewed by many as a top-tier vice presidential prospect – making her criticism of Bush interesting.

Does her swipe mean she’s not on his short list of possible vice presidential choices in the event he wins the “Republican” nomination?

And does it mean Haley is on his list?

(You know … all prior indications to the contrary).

Fiorina also bashed the media for employing a double standard when it comes to the issue of money in politics.

“I always find it fascinating the media tends to gravitate toward stories of money that funds conservative causes,” she said.  “I don’t see big newspaper articles about George Soros or Tom Steyer.  The point is the media doesn’t like one kind of money but is Okay with another type of money. I think everyone ought to play by the same sort of rules. It’s one thing for Democrats to complain about corporations getting engaged in politics, yet they never have a problem with unions in politics.”

Fiorina has been an aggressive, adept critic of Clinton so far during this campaign.  It’s nice to see she’s got other clubs in her bag … and while she probably won’t make the cut for the first GOP presidential debate in Cleveland, Ohio this week, we look forward to hearing more from her.