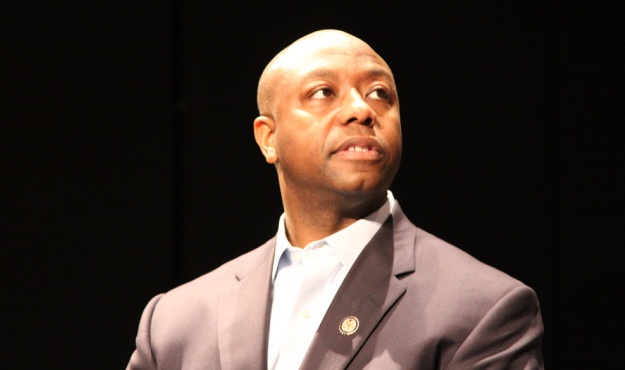 || By FITSNEWS ||  It’s called a “blue slip.”  And in the halls of power in Washington, D.C., it’s the difference between a judicial nomination proceeding – or being stopped dead in its tracks.

“Blue slips” refer to letters sent from the chairman of the U.S. Senate judiciary committee inviting U.S. Senators from the state of residence of a federal judicial nominee to provide their opinion on the nominee.

This U.S. Senate tradition – dating back to the early part of the twentieth century – enables U.S. Senators to retain veto authority over federal judges nominated in their states. 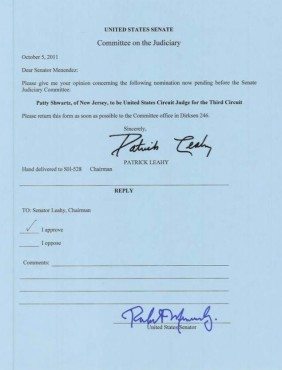 The process is simple: Unless blue slips are returned in the affirmative, nominations go nowhere.  In fact if Senators want to block a judge, the tradition is for them to simply not return the form.  For example, when U.S. president Barack Obama nominated “thug life judge” Alison Lee to the federal bench –  he received zero of the two blue slips he needed to move her nomination forward.

And so Lee’s nomination died.

Back in April, this website reported on S.C. Supreme Court justice Donald Beatty being vetted as Obama’s second choice.  Beatty’s nomination – which we wrote extensively on here – has near universal support in the Palmetto State.

“Beatty’s situation is interesting in that his supporters – and opponents – are lobbying equally hard for him to become a federal judge,” we wrote last September.

One reason?  A high-profile fight Beatty recently engaged in with the state’s solicitors, who are eager to see him removed from the state’s high court.  Several prominent plaintiff’s and defense attorneys have grumbled about Beatty, too.

“He’s been an absolute disaster,” one privately told us this week.

“Republicans” in the S.C. General Assembly are also eager to see Beatty go because it means they won’t have to make him the next chief justice of the state’s high court.  Or for that matter keep him on the court.

In fact they’re actively searching for a big name “Republican” candidate – i.e. current U.S. Rep. Trey Gowdy – in the event they have to justify passing over Beatty, who is next in line for the position in terms of seniority.

But their hope is Beatty will get the federal nod … and they’ve convinced Graham to go along with Beatty’s nomination (in exchange for consideration regarding the next upcoming federal vacancy).

Standing in the way of all this scheming?  Tim Scott.

According to multiple sources familiar with the situation, Scott is adamant in his refusal to endorse Beatty’s ascension to the federal bench.  In other words, there will be no blue slip coming from his office.

“Because Beatty is a bad judge and (Scott)’s not going to put him on the bench just to solve someone else’s political problem,” one source told us.  “Tim didn’t make the mess – he’s not going to clean it up.”

Well, well.  We don’t agree with Scott on everything, but those are damn good points … of course even if they weren’t it wouldn’t matter.  By virtue of his position, Scott can block the nomination.

Which is exactly what he’s doing.

In fact Scott’s refusal to budge on Beatty is complicating GOP plans … and the clock is ticking.

The 15-year reign of terror of current S.C. chief justice Jean Toal ends next month – at which point she will be replaced by longtime associate justice Costa Pleicones.  However Pleicones will serve for only one year due to his scheduled retirement.

That means lawmakers have to act fast to find an alternative to Beatty … because come next spring they will be voting on the board for the next chief justice.  And if a big name like Gowdy isn’t in the mix, the “conservative” General Assembly will wind up putting another raging liberal in charge of the judicial branch of government.

Planned Parenthood Apologizes For Its “Tone”

Bakari Sellers On The Move

JEAN HOEFFER TOAL, the foul mouthed, liberal, Democrat, tyrant should have NEVER been placed on the Court in the first place, by our RINO Republican General Ass.! She had a go to Judge a while back, one of her favorites. My opinion: corrupt, incompetent, dishonest Family Court Judge. The worse I’ve ever seen on the Bench in 30 years. He was elevated to the Federal Bench, by Lindsey Graham. Beatty is one in the same. The General Ass. elevated him only due to his race and to appease the Black Caucus. Now, the incompetents want him as a Federal Judge too!
What Horse Shit. We need a House cleaning from the White House to Town Hall.
There are more qualified , competent Black Attorneys and White Attorneys who are much more deserving of appointments than Toal, Beatty and any of their ilk!

I remember very vividly when Toal was a House member. She was speaking on an issue I had an interest in. I approached her during a break, in the outside lobby of the Capitol and asked her if I give give her some facts. Her reply, “Don’t confuse me with the God#$%& facts” and walked away.

Looiks like the ONLY SC senator is doing the right thing. This gives credence to the call for terms and term limits to judges. I have long said we need to elect judges like a lot of states do. That way we would at least have a chance to get rid of bad ones. As it is now , if they fool enough politicians to get on the bench they do as they please forever. John Roberts is the poster boy for judicial term limits. President Bush (43) put him up on the assumption that he was a conservative, then after he is in the lifetime position he turns on conservatives. WOW What a guy !!! But on the state level, judges should be elected by the people they “serve” . Circuit judges should be elected in their dists. and supreme court judges should be elected statewide. Why not ???

Beatty told the truth about the unethical practices of solicitors. Scarlett Wilson’s reply, “some things…”, which tells me that “other things” in Beatty’s remarks were true. The defense lawyer’s association went to court citing the same argument. They didn’t win, but there are too many singing the same tune (and the partial admission by Wilson) for it not to have weight. Scott hasn’t been advised by Graham as to how the matter should be handled.

Maybe if Gowdy can get on the court he will have a chance to win his Benghazi case!!!

Personally I think sasquatch was behind the whole thing.

Typical liberal BS, denial and refusal to see the forest for the trees!

“He’s been an absolute disaster,” one privately told us this week.
In the private sector, under-performing individuals are usually shifted to a position where they do less damage or they are fired.
In the the land of the public sector, they often get promoted. Any wonder our bureaucracies are bloated and under-performing.
Good for Senator Scott.

For a State that considers itself Conservative and is supposedly run by Republicans how do we end up with so many Liberals being appointed to powerful positions that affect us all. It is time for another Party in South Carolina or cleaning out these Democrats that run as Republicans.

Given the epidemic of prosecutorial misconduct across the country – which you know about if you read about US supreme court rulings over the past few years that let them get away scot free with sending one innocent man after another to death row when they knew they were innocent – a knowledgeable person would realize that Judge Beatty was on the mark when he gave those corrupt solicitors, including Scarlett Wilson – who Loretta Lynch pretty much called her BFF at a news conference this PM – that stern talking to that pissed them off so bad.
Therefore, Beatty is just the kind of person who should be on the federal bench because he won’t let the incompetent, corrupt US Attorneys get away with crap. He already has their number.

A-men to everything that KittredgeforChiefJustice wrote. To that, I would add that Justice Kittredge has a great judicial temperament and is always fair to all parties. He is someone that the State genuinely would be proud of to be our Chief Justice–Democrats, Republicans, and Independents alike!

Everytime I see a picture of him it reminds me of Forrest Gump.

In regards to seniority, Justice John Kittredge is the next one in line–after Beatty. This one is a no brainer. Justice Kittredge is an excellent choice for our next Chief Justice and would do an outstanding job.

I agree with those supporting Justice Kittredge for Chief Justice. Few people in public life in South Carolina have earned the level of respect he has across the state. He would be excellent.

And OF COURSE Will Folks wants you to believe it should
happen—like he slept with Haley…NO…WAIT !!!

Kittredge is absolutely the best pick for the job!

I agree with SCB: “Kittredge is absolutely the best pick for the job!” I have had occasion to appear before John Kittredge when he was a Family Court Judge, a Circuit Court Judge, a Court of Appeals Judge and a Supreme Court Justice. He is second to none. Not only does he have stellar academic credentials and experience at every level of our state’s judiciary, he has the leadership capabilities to lead the South Carolina Supreme Court to new heights. Suffice it to say, John W. Kittredge is obviously the best choice to be our state’s next Chief Justice. May the General Assembly have the good sense to concur.

John Kittredge is, without question, the most qualified one to take on the role as our next Chief Justice. There is not a close second. Please General Assembly: you must get this one right.

Ditto to all of the positive comments re John Kittredge. General Assembly, please support and vote for John as the next Chief Justice of the South Carolina Supreme Court. It will be one of the most important and historical votes you will ever make as a legislator. John will make sure that the Supreme Court is the best it’s ever been.