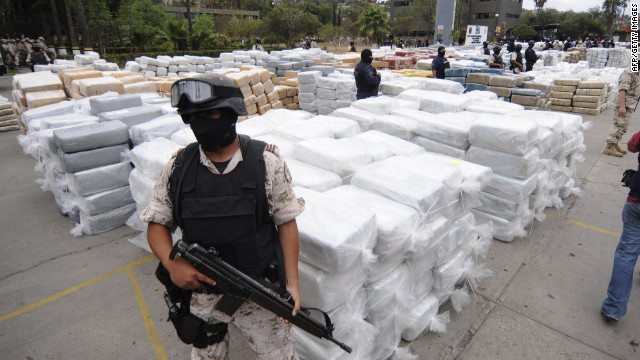 FIGHTING AN UNWINNABLE WAR IS EXACERBATING … NOT FIXING OUR PROBLEMS

But it should also spark a conversation on another important front: The unmitigated failure of America’s “War on Drugs.”

This conflict has deprived U.S. taxpayers of more than $1.3 trillion over the last four decades – while utterly failing to stem the tide of drug use in our country.  It’s also unnecessarily incarcerated millions of our citizens and clogged our judicial system – all in the name of enforcing a hypocritical prohibition that should have never been imposed upon a free society in the first place.

We’ve said it before and we’ll say it again: The “War on Drugs” is a war on liberty, prosperity and security.

It restricts our freedom, harms our economy and makes us less safe.

Exhibit A?  The Mexican drug trade run by El Chapo and other kingpins.

Consider this piece published late last month by Don Winslow – who has covered the “War on Drugs” for the last fifteen years.

“Cocaine, heroin and meth pour across (the U.S.-Mexican border) – mostly carried in trucks, but also hidden in cars, lugged on foot by human ‘mules,’ walked across taped to people’s bodies, hidden inside corpses, packed across on actual mules or horses (two of which, abandoned in the desert, lived out their lives on our place), run through tunnels, launched by catapults – any method that human ingenuity can devise,” Winslow wrote.

What doesn’t cross the border so much anymore, though? Pot.

According to The Washington Post, “the amount of cannabis seized by U.S. federal, state and local officers along the boundary with Mexico has fallen 37?percent since 2011, a period during which American marijuana consumers have increasingly turned to the more potent, higher-grade domestic varieties cultivated under legal and quasi-legal protections in more than two dozen U.S. states.”

Winslow says these developments have made the marijuana trade “not worth it” to the drug cartels, prompting them to import “more coke, meth and especially heroin.”

And the leading heroin importer?  El Chapo’s Sinaloa cartel – which reaps massive profit margins off of the drug (much bigger margins than it makes off of cocaine).

So what should America do?

“In essence, when we stop fighting, we win.  When we keep fighting, the cartels win,” Winslow wrote. “When the drug bosses look at the border, they don’t see fences or walls – they see money.  The border is siempre verde – always green – to drug traffickers.”

People are always going to use drugs – and if they do so in a manner that doesn’t impose on the liberty of others, we’ve got no problem with that (nor should government).

So why?  Why do we keep fighting a war that saps our freedom, stunts our economic growth, siphons tax dollars and spawns all sorts of totally unnecessary violence?

Our government’s attempt to criminalize drug use has done nothing but create a host of pernicious problems … while utterly failing in its only stated objective.  It’s also succeeded in sending two types of Mexican immigrants across our borders – the criminals (or slaves) who carry the drugs and the honest, hard-working people who are desperate to escape the cartels.

The best thing America can do to solve its illegal immigration problem?  End the failed “War on Drugs.”