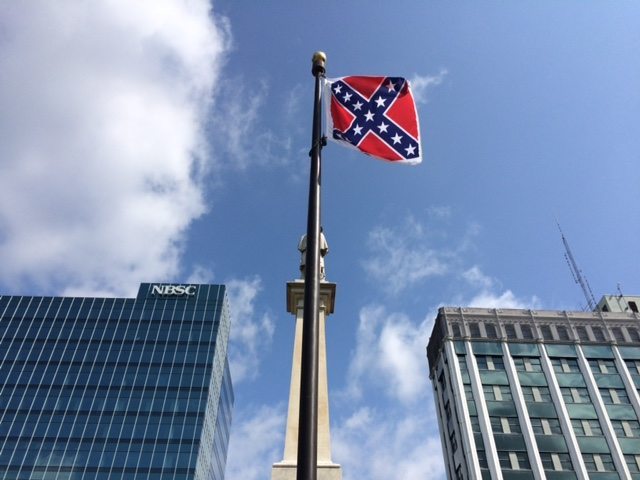 INSIDE THE BOTCHED EFFORT TO BUY OFF THE CONFEDERATES

|| By FITSNEWS || This website recently published an exclusive report regarding secret negotiations between powerful S.C. Senate leader Hugh Leatherman and leaders of the South Carolina division of the Sons of Confederate Veterans (SCSCV) over the proposed removal of the Confederate flag from the grounds of the S.C. State House.

Now, FITS has obtained exclusive documents related to this failed deal – including a draft statement that was supposed to have been released announcing the compromise.

Lawmakers recently agreed to debate the flag’s current position on the north lawn of the State House in the aftermath of last month’s horrific, racially motivated “Holy City Massacre” – the mass murder of nine black churchgoers at the Mother Emanuel AME Church in downtown Charleston, S.C.  The Mother Emanuel victims – including S.C. Senator Clementa Pinckney, the church’s pastor – were gunned down during a Bible study by Dylann Storm Roof, a 21-year-old white supremacist who used the Confederate flag as his calling card.

We’ve written extensively in the aftermath of the shooting in support of removing the flag – and doing so expeditiously.  We’ve also provided some extensive historical context related to this debate (here and here).

Anyway, as we reported earlier Leatherman’s plan called for a number of “carrots” to the Confederates.

First, there would have been ongoing state funding for the H.L. Hunley Confederate submarine (including the construction of a Confederate museum to house the sub and other Civil War-era artifacts).  The state would have also agreed to continue printing SCSCV license plates – and would have provided a location for the SCSCV to erect its “Secession Monument.”

The organization has been trying for years to find a suitable location for this monument – which envisions an 11.5-foot stone column at the center of a 40-foot-by-40-foot plaza modeled after the “Southern Cross.”

In exchange for all these concessions, the SCSCV would have provided its written endorsement supporting the flag’s removal.

“Basically this was an effort by Leatherman to bribe flag supporters with your tax dollars,” we wrote.

Well, Leatherman and S.C. Senator Chip Campsen – another flag supporter who participated in the secret negotiations.

Naturally we oppose any such deal.  But then again we’ve opposed government funding for Confederate-related nonsense for years.

Had the SCSCV taken the bait, though, FITS has obtained a draft of the press that would have been sent out by the organization.

We, the South Carolina Sons of Confederate Veterans, express our deep sorrow for the loss of Senator Clementa Pinckney and eight members of his congregation at historic Emanuel AME Church. Our thoughts and prayers have been with their families, the church and the Charleston community.

We have a deep and abiding respect for the courage, wisdom and dignity of the victims’ families, Mother Emanuel Church, and the entire AME community in dealing with this unspeakable tragedy. We are amazed by their grace, forgiveness, and even charity extended to the perpetrator of this horrific crime.

We are moved by the power of their Christian witness to a grieving community and watching world. By pursuing peace and reconciliation they have demonstrated that love is more powerful than hate.

We are inspired by their actions and stand in awe of their faith.

In the wake of this tragedy the Confederate Battle Flag flying at the Confederate Soldiers Monument on our Statehouse grounds has become the focus of much attention. This attention highlights conflicting views of the flag and its meaning.

To promote harmony among all South Carolinians of goodwill, the Sons of Confederate Veterans support removing the flag from the Statehouse grounds.

Too often the flag has been expropriated as a political tool by those who seek to divide us, or as a symbol by those who seek to harm us. We condemn such illegitimate uses of the flag that have caused it to become disconcerting to some South Carolinians. To allay these concerns we support removing the flag from the Confederate Soldiers Monument and placing it in a museum to be displayed and commemorated in an appropriate historical context.

We take this position as a reciprocal act of grace, gratitude, respect and peacemaking in light of the amazing witness of the Mother Emanuel victims.

In closing we reflect upon General Robert E. Lee’s wise counsel to put conflict behind us and move ahead:

The gentleman does not needlessly and unnecessarily remind an offender of a wrong he may have committed against him. He can not only forgive; he can forget; and he strives for that nobleness of self and mildness of character which imparts sufficient strength to let the past be put the past. – General Robert E. Lee

Thank you for your support.

Obviously that statement never went out … because the bait wasn’t taken.

According to our sources, the “Leatherman agreement” collapsed when a former SCSCV leader caught wind of the particulars of the agreement and threatened to rally rank-and-file members of the organization against it.

As a result, Leatherman and Campsen received the following letter from SCSCV Commander Leland Summers informing them that the deal was off.

My staff and I express our gratitude for the hospitality extended to us on 2 July, 2015. As we discussed, I presented proposed press release and related matters to the Executive Council of the South Carolina Division in a teleconference last evening. After lengthy discussion, by majority vote, The South Carolina Division, Sons of Confederate Veterans rejects the press release.
Thank you for your consideration.

Here’s a copy of that letter (.pdf here).

As we noted in our previous report, it’s not entirely clear whether flag opponents need to make any concessions in order to get the controversial banner taken down – although a recently announced Ku Klux Klan rally, alleged threats against lawmakers and robo-calls attacking flag opponents have made members of the S.C. General Assembly exceedingly nervous.

Polls taken in the aftermath of the Charleston attack showed a majority of South Carolinians supported taking the flag down – although there were (and presumably still are) deep partisan and racial divides.

So … how did we get here?  Why is the flag flying on government property in the first place?

On April 11, 1961 a version of the Confederate flag was hoisted above the State House at the request of S.C. Rep. John A. May of Aiken, S.C.  The following March, a resolution sponsored by May was passed that was supposed to keep the flag flying for one more year.  However May’s resolution contained no end date, and so the flag flew from atop the dome (and from within both chambers of the State House) for another four decades until July 1, 2000.  That’s when a bipartisan, biracial compromise took the banner off the dome (and out of the chambers) and hoisted another version of the flag at its current location on the north lawn of the State House.

That version of the controversial banner has flown ever since … while the flags taken from the dome and the House and Senate chambers currently reside at the S.C. State Museum.

The Confederate flag removed from the dome of the S.C. State House in 2000.

The Confederate flag taken from the S.C. Senate chambers in 2000.

Now lawmakers have overwhelmingly agreed to revisit the issue – which they will do beginning July 6.

Will they be able to summon enough votes to take the controversial banner down?

We believe so, although staunch flag supporter Lee Bright – a State Senator from Spartanburg, S.C. – has vowed to introduce multiple amendments to the flag removal bill.  Another S.C. Senator – John Courson – has reportedly told his colleagues he plans to introduce an amendment to replace the Confederate flag with the Bonnie Blue Flag, which was the banner flown by Confederate forces during the Battle of Fort Sumter.  Another rumored Courson amendment would fly the South Carolina state flag from the Confederate flag’s current location and “some other flag” on Confederate Memorial Day, which is a paid state holiday in the Palmetto State.

Our advice to lawmakers remains simple: Don’t get cute with compromises. Take the flag down. Do it quickly.  And then move on to addressing the myriad of issues which make South Carolina one of the poorest, least intelligent, most underemployed, most dangerous states in America.