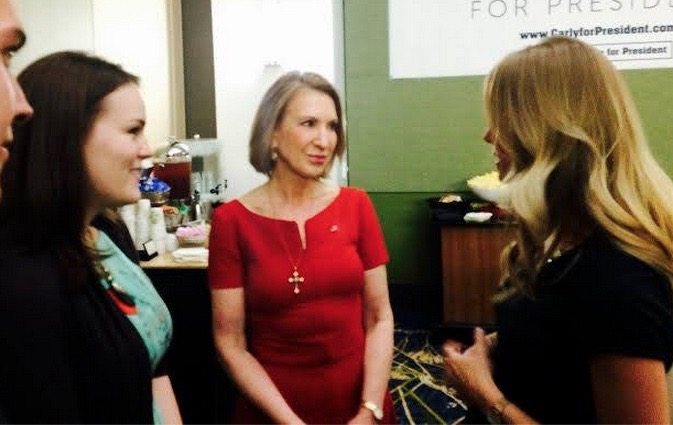 || By FITSNEWS ||  In a nifty political move, Carly Fiorina – the only woman currently seeking the “Republican” presidential nomination – is putting presumed Democratic nominee Hillary Clinton to the test using the voices of “everyday South Carolinians.”

After spending tons of time in Iowa and New Hampshire in the wake of her formal entry into the race, Clinton is at long last making her first visit to the early voting Palmetto State this week.

Why the multi-week delay?  Well, Clinton got pummeled in South Carolina by then-Senator Barack Obama back in 2008 … meaning she was clearly in no hurry to take her “everyday Americans” tour to the Palmetto State.

Fiorina – looking to make a name for herself among the crowded GOP presidential field – wants to put Clinton to the test.

Unfortunately, Clinton doesn’t seem to be a big fan of the interrogative endeavor – as her campaign has repeatedly shielded her from having to face reporters.  In fact Clinton took just nine questions from the press during her first month as a candidate.

“Hillary Clinton seems averse to answering questions in anything other than brief, scripted responses,” said Kaaren Mann, Fiorina’s regional field director. “People across the state want to know what she believes and how she will lead our country.  If she is going to ask voters questions, it would be great if she would answer theirs, too.  Mrs. Clinton, I join those who are asking the questions in welcoming your responses.”

Erin M., Moncks Corner – “Mrs. Clinton, The Clinton Foundation has been under fire in the media for accepting donations from foreign governments who were also lobbying the State Dept. while you were Secretary of State. What can you say to convince us it wasn’t a ‘pay to play?’”

Allison R., Florence – “Mrs. Clinton, the spending policies of previous administrations have been out of control, resulting in a skyrocketing federal debt. What would you do to solve the debt crisis?”

Ben R., Myrtle Beach – “Mrs. Clinton, in hindsight, it seems clear we should have kept a troop presence in Iraq. Knowing what you know now, would you still vote against the surge in Iraq?”

Morganne M., Charleston – “Mrs. Clinton, advances in medical technology have reshaped the debate over abortion, significant majorities of Americans – including a majority of women in some polls – consider themselves pro-life. Those advances are only going to continue to give us a clearer picture about life’s origins. Where do you stand on when life begins?”

Victoria R., Columbia – “Mrs. Clinton, you’ve said that you will go beyond what the president has done in terms of immigration reform. What would you do and please explain how it would be legal.”

Dan H., Anderson – “Mrs. Clinton, President Obama was reluctant and slow to engage ISIS. Are air strikes the right response to their declared motive to plant their flag on the White House? In other words, what would you do to keep your aspired homestead safe from ISIS?”

Richard H., Beaufort – “Mrs. Clinton, most people denounce your handling of Benghazi as a catastrophe. Can you tell us what happened and what would you do differently if you had the chance?”

Esther W., Simpsonville – “Mrs. Clinton, you came out against RFRA laws in Indiana and Arkansas that were similar to the federal law your husband signed during his presidency. As president, how will you work to secure the rights of religious persons in America?”

While Clinton is in Columbia, S.C. address several Democratic groups, Fiorina will address “Republican” lawmakers in the state’s capitol city.  Unlike Clinton, she’ll also be taking questions after her appearance.

“We’ve answered hundreds of questions from reporters because we believe the American people will not and should not elect a president that can’t answer for her record, won’t explain her positions or for whom the truth is whatever she can get away with,” Fiorina spokeswoman Sarah Flores said.