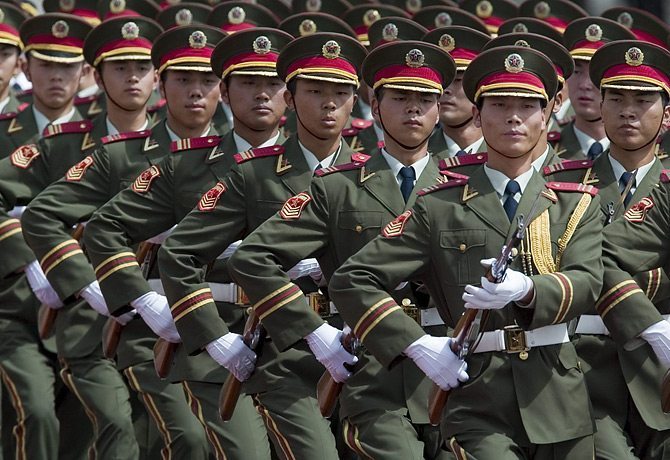 IT’S ALL ABOUT THE BENJAMINS … AND THE YUAN

|| By FITSNEWS ||  When he’s not busy bankrolling all sorts of liberal causes, billionaire financier George Soros is trading in some next-level GOP-style scaremongering.

Take notes, “Republican” fearmongers.  This is how you do it …

“If there is conflict between China and a military ally of the United States, like Japan, then it is not an exaggeration to say that we are on the threshold of a third world war,” Soros said this week at the latest gathering of global economic elites.

You mean a conflict that starts someplace … like this?

Soros is pushing to permit China’s currency, the yuan, to become part of the International Monetary Fund (IMF)’s global basket – which includes the U.S. dollar, the Euro, the British pound and the Japanese yen.  Previous efforts to include the yuan have failed.

What would happen if the dollar lost its reserve status?  That’s a good question.  One international currency expert at the University of California-Berkeley estimates it could cost America nearly two percent of its gross domestic product (which last we checked was already struggling).

Soros says China’s currency must be included … or else.

“Without it, there is a real danger that China will align itself with Russia politically and militarily, and then the threat of third world war becomes real,” he said.

Look in the rearview.

Russia and China are already aligning … and our braindead foreign interventionism is egging them on.

We know earlier this week an American surveillance plane received repeated warnings from the Chinese Navy for flying over a disputed area of the South China Sea.  And we know in response to that incident, former Central Intelligence Agency (CIA) deputy director Michael Morell told CNN there was “absolutely” the risk of imminent hostilities between the two countries.

“There’s a real risk, when you have this kind of confrontation, for something bad happening,” he said.

Can our country afford a World War right now (along with the War on Terror II and our new Cold War with Russia)?

Len Anthony: The Bible Is Wrong On Homosexuality

Trying to even place some kind of “budget’ on any war is ludicrous at best.
Wars aren’t fought on the cheap and it is so unbelieveably naive to take a libertarian view of how wars are funded.
If WWIII DOES happen (which I pray it NEVER does) – that’s it; it’s fucking over

“The most powerful force in the universe is compound interest.” –Albert Einstein

Ummm….guess we can’t borrow from China to fight China??

China can’t afford a nuclear exchange either. Most of its leaders, like elected scums in the DC, would be vaporized – or at least die an agonizing death from radiation. Where are they going to hide when the sky fills with nuclear tipped missiles, to old decaying and weak 1960s bunkers? And China …. what are they going to do when they are blown away back into the 1400s? If man must destroy other nations with nukes, then go all out and get it over with by destroying the entire planet where mankind is sent back to the caveman days. Meanwhile, Obama is seen around the world as a piece of shit. Putin has put the idiot in his place so many times. And then there is that fucked up US Senator Graham who has gone off the edge repeatedly threatening to kill Americans. The man is totally delusional, and so are his placaters.

‘Get the damn thing over with” was a common sentement among adults in the 1950’s and early 60’s.
Some like to fawn over those times but many looked over their shoulder every day.
To this day every “Boomer” knows what to do if you see the “flash” (myself included) because “Burt the Turtle” told us what to do:
****”DUCK & COVER”!!!!!******
It’s no wonder we “Boomers” (children of those adults) are so damn crazy!!!!

When was war ever affordable? It’s not like deciding whether to buy a new car. Can the Russians or Chinese afford a war? I guess ISIS can afford it. They get it on the cheap using suicide bombers. Maybe we should go that route. No more billion dollar jets.

What Is Causing The Strange Trumpet Sounds In The Sky All Over The World?
All over the globe, people are recording extremely loud sounds coming from the sky

Lots of audio/video on YouTube. Search trumpets in the sky.

I kept hearing noises like that in my neighborhood. After several nights of waking up to the noise, I realized it was the neighbor’s dogs sniffing out a hot bitch.

What Soros and others are proposing is to further integrate China into the global system. In doing so, the theory holds, they have more to lose by conflict, and more to gain through cooperation. It was the exact reason for the US pushing the creation of the EU, the integration after WWII of Germany back into the EU, and the integration of Japan into the world economy. And so far, it’s been successful. That’s all. Russia is a 3 trillion dollar economy. The West, Japan, Korea combined, are a 60 trillion dollar economy. Which would China rather be close to?

The inclusion of the Chinese currencies into world markets just gives Soros a bigger chess board and a fatter bank.

It matters not what flavor of the century a government might be embroiled in, what matters to George is the size of that population and economy. He has banks and pawns in Hong Kong and Shanghai too.

Why are you bewailing this “war” talk Fits?

One of your preferred presidential candidates,Ted Cruz, is one of the biggest”hawks ” running.

Just Google (or Bing) The 2010 IMF Monetary Reform, Enhancing International Monetary Stability—A Role for the SDR? Middelkoop’s “The Big Reset” and you will see this has been in play for a while now. If you get your news from MSM, you will have missed it.

The USD no longer being the reserve currency will be a fact in short order IMO.

Whether congress’ part in all of this is a game or not, remains to be seen… my belief is they are posturing and it is a matter of time… in the end, they will fold and tell us they had to…

Middelkoop stated in his book TBR, the Yuan needed some seasoning. There needed to be more RMB in circulation making it stable enough for the financial system. If you go to the following document you will see where he might have gotten this information from.

The IMF states it right here in black and white || “40. The RMB question. The recent review of the SDR valuation concluded that in spite of China’s prominent share of global exports, the RMB should not be included in the SDR basket, as it did not meet the criteria to be determined a freely usable currency… “.
http://www.imf.org/external/np/pp/eng/2011/010711.pdf

Over the past year you have seen countries begin to change to the yuan as their currency of choice. This allows there to be more RMB in circ within the global market, which in turn keeps the market stable enough to handle the RMB once it is put into the SDR basket and the reserve currency.

The above are just a handful of documents that will support what is coming down the pike for the US economy. When this happens, the economy will take a hit and the USD will lose value. This is why there is a potential for chaos in the US. Whether the chaos actually happens remains to be seen. But there is a potential.

If you look at history (because we usually repeat it) you will see a similar history for the UK when they lost the reserve currency status for the gbp. There are many theories out there as to what should happen and what will happen. I believe the BRICS establishment will be a part of this transition, the RMB will become the reserve currency and there is not much you nor I can do… the fact that our representatives in DC are there, will not make a difference, this will play out as it is expected.

Spoken like a true pump-n-dump paper hanging broker. So complicated it takes a “specialist” to buy it for you.

Wow.. that is interesting and basically you are showing me your hand… and that you’re not very intuitive. The closest I came to a broker was when I sold real estate.. but that was pre-Hugo… I have never owned stock, played on wall street or even know what a “pump-n-dump hanging broker” is….

Actually, my background is in healthcare and after a couple of difficult years, I began to educate myself on what is really happening and not what the MSM was selling the public on was happening.

I stand corrected. You are right on about a couple of things for sure.

The world’s currencies and markets will continue to be manipulated by “progressives”, et al, and MSM does not appear to have a clue.

BTW: Did you notice the part of the IMF changes where Tiny Timmy Geithner and Big Ben Bernanke parked themselves in the cat/bird seats at the IMF?

They been milking that puppy … and now are working for hedge/brokers and “consulting” to Goldman … Later on they will be eligible for seats on the IMF board(s) and parking their ill gotten goodies in Switzerland.

Consider how the current administration has been and still is able to manipulate the gold markets world wide to hide the true nature of our Gruberment’s induced inflation.

Yep… somehow, someway these folks end up back in the catbird’s seat. It is all cyclic… tit for tat. Scratch mine and I scratch yours.

I will probably get slammed for saying this but here goes: Now we are looking at a competition between another bush and another clinton… what a joke! I am tired of both being in DC… For that matter, I am tired of most of those folks in DC. We need new blood in washington. Those there have been there far too long and are haggard in appearance and beliefs. They need to go back to their hometowns with their new millions… Soros included.

Some of the decisions made by Bernanke, I am embarrassed to say he is from South Carolina. QE1, 2, 3 & now 4 are propping up the financial system – when it was stopped last year, it would appear that Japan picked up the baton and started … again at the bidding of washington and the federal reserve. We need someone in DC that will stand up to the banksters.

“… Now we are looking at a competition between another bush and another clinton… what a joke! I am tired of both being in DC… For that matter, I am tired of most of those folks in DC. We need new blood in washington. Those there have been there far too long and are haggard in appearance and beliefs. They need to go back to their hometowns with their new millions… Soros included. …”

Bottom line. Now Soros want all of the gold, too.

Soros is just lobbying to pad his wallet some more. If and when a third world war kicks off, Soros will be funding the other side. The man is a monster.

Soros complete and total plan is to increase his wealth.

If the world’s economies were tilting in another direction, He would still be in the mix, just as wealthy if not more so, taking the opposite side, punching up the fear, frustrations

I would choose Soros over a coupla Kochs anyday.

Of course you would.

And you would chose socialist/unionist/democrat “progressive” Fascism over your own grandchildren, too.

Don’t sweat the small stuff. We have Obummer and he has our backs.