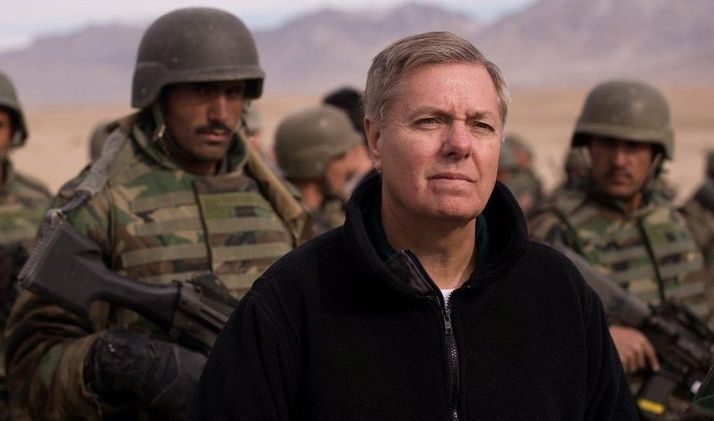 || By FITSNEWS ||  U.S. Senator Lindsey Graham is officially running for president … officially announcing this week that his official announcement will take place (officially) on June 1.

“I’m running because I think the world is falling apart,” Graham said.

We agree … thanks in no small part to the costly and colossal failure of America’s ongoing interventionist foreign policy.

But once again it’s not Graham’s political ambitions garnering headlines, it’s the “insane-a-palooza” that continues to flow from his warmongering mouth.  Two months after saying he’d use troops on the U.S. Congress if it failed to authorize more military spending, Graham is now threatening to kill any U.S. citizen who even thinks about joining al-Qaeda or the Islamic State in Iraq and Syria (ISIS).

“If I’m president of the United States and you’re thinking about joining al-Qaeda or (ISIS) – I’m not gonna call a judge. I’m gonna call a drone and we’re gonna kill you,” Graham said in Iowa last week.

Sheesh … such a tough guy, right?

Once again, supporters of the rabidly militant lawmaker (who knows a thing or two about joining up with terrorists) insisted his comments were made in jest.

Of course Graham also offered up this doozy …

When it comes to blaming people about Iraq, the person I blame is Barack Obama and not George W. Bush.

Will someone please tell us what this guy is smoking?

According to the most recent Iowa “Republican” presidential primary polling, Graham is not even registering as a blip on the radar.  Meanwhile in his home state of South Carolina – which hosts the “First in the South” presidential primary – people have made it clear they don’t want him to run.

So why is he running?

Easy: Because he is crazy …

““I’m running because I think the world is falling apart,” Graham said.”

Huh, I thought it was because the Presidential Seal is suffering from a lack of pastels and the window treatments in the Oval Office need a lady’s touch.

Joking about Graham’s sexual preferences may be misconstrued as ISIS sympathizer speak.

I guess I better find me a mobile bomb shelter before I’m drone striked without a trial/chance to tell everyone I’m not for “ISIS”.

For being one of those “Constitution-loving Republicans”, Graham certainly has very little regard for the 5th and 14th Amendments!

The only solution is to colonize Iraq and other portions of the Levant much like the Crusaders did after the First Crusade.
it will take a couple of generations but the offspring will become Occidental but with western upbringing and values (again just like after the First Crusade) and will become the bulwark against Islamic Fundamentalism.
Granted the Christian Kingdom of the Levant lasted less than 100 years but we have learned from those mistakes and I’m sure we can do better than the last time………………..
After being involved in 3 Middle Eastern wars I volunteer to return to the Middle East and offer my services to stem the Muslim tide (and assist in killng more of those ungodly ragheads as long as I’m able) and more importantly to breed as many western valued fair-skinned Celtic offspring as humanly possible……………….

He may be posting as “Ginormous Tau” (I am a big letter T. LMAO) (see above – showing his privates)

He has apparently been hacked.GT posted on Mande’s article last night that he was receiving ‘suspicious activity’ alerts from Google-somebody, he appears to believe it is Buz Martin and Twirl/Garbage…3-2-1 aka SYNTwist…today he informed me in a post that he is under a cyber attack that is affecting his family and friends via his email…

Just reporting…I won’t be back until the spiritual,intellectual and commentary creating genius/conservative GT returns…this is fucking wrong…same ole same ole as TSN and why the former SNOB disappeared….

You kooky kids sure are paranoid. Gotcha foil hats on? LMAO!

lol…’kooky’ is having ‘kids’ and putting yourself in a position to be SUED and lose everything That is kooky?Fuck you.

Big talk for a candyass.

Ha!Is that what you women beaters call em before ya beat the shit out of em? ‘candyass’?

Keep your eye to the sky, and put tack strips at the end of the driveway.

Crazy? No. So why is he running?
He is going to be the next Secretary of Defense.
Nikki resigns from office in 2017. McMaster appoints Haley as South Carolina’s first woman Senator.
Will Folk’s head explodes.

I doubt Hillary would pick him as Defense Secretary.

This is getting buried in the thread. I responded again at the newest comment end of thread.

what are mcmasters chances of becoming governor?

He’s the Gov Lite right now, so if Haley resigns, or leaves office for any reason prior to January 2019 it’s 100% unless he leaves office before her.

well ya, but if he had to actually run, what are his odds

Per SC constitution the Lieutenant Governor becomes Governor when the Governor leaves office before completion of his/her term. Don’t worry. McMaster plans to invite blacks to his inauguration to be servants.

What if someone thinks Lindsey Graham might be trying to join ISIS? Does he send a drone after himself?

The very idea that Linda Graham even imagines himself President of the US is evidence enough that “his” world is indeed falling apart.

graham said he wouldn’t have invaded iraq if he’d known there were no WMD. did he just find this out yesterday? or has he been absolutely full of shit for over 10 years?

Who knows how long he’s been full of shit? I’m sure Lindsey found a nice young man to pack it in years ago.

If you “news” source is Will Folks-Goebbels, then I understand your confusion. It is best to read his entire statement.

Graham is one fucked up psychotic. Is he gonna kill me for saying that?

Possibly, he’s admitted that he thinks thoughtcrime should be punishable by death.

no – only if you’re “thinking” that

I would rather you not call him Whoremongering. That is an affront to all self respecting Whores and to join him with Whores is demeaning the Whores and they don’t deserve that.

Wow, Unconstitutional government murder of citizens – that out to play out well on the debate stage!! Or even better on the morning after Sunday talk show. How’s he going to square that. He just gave Rand Paul a big, rotten tomato to throw at him. Why doesn’t Graham just kick his own ass. That would be entertaining.

“Why doesn’t Graham just kick his own ass. That would be entertaining.”

You know how some people envy dogs because they can lick their own balls?

Now, instead of Graham kicking his own ass….what do you think he’d rather do to his own ass?

I agree, it would be entertaining.

Obama has unconstitutional immigration and Obamacare.What is wrong with killing looters and law breakers if they are burning a city down?I know they are ALL Democrats….however….

Think of the upside: when Graham announces, that’s the end of his being on the Sunday shows every week. Not that I ever watch.

Law and order music plays quietly in the background.

Looks like someone has a little too much to think.

Miss Graham is an consistent embarrassment to this state and nation and is more dangerous to this country than any threat from ISIS. So sick and tired of his fear-mongering, but on the bright side, I’m sure it keeps him from doing any ‘real’ governing and messing up anything else.

Jeez, the Repub’s keep trotting out their line of wacko’s , and Hillary will win in a cake walk.

Just like the dems did in 2014 mid terms….Hillary had a traumatic ‘brain injury’ and why they are keeping her away from everybody….

Read the story in Politico – GOP is dying off faster than it can replace voters.

Both parties are dying off. Nobody believes any of them anymore. Just because “politico” writes otherwise does not make it so. Where is the proof? Oh, a poll of 1000 in a liberal city or state? Pfffft!!!

I read it too. There is one advantage to the Republicans. People only get older. They don’t get younger. I was once a young stupid Democrat.
The median age is rising as people live longer.
Why is the number of Republican House members the highest in eighty years? Nearly the same with governor ships and state legislatures.

Isn’t this the same guy who was going to overthrow or invade or imprison Congress if they didn’t get the military a trillion dollars….in jest, of course.

Where do you think the orders were coming from to allow Ferguson and Baltimore to burn?

Better chance of the military and law enforcement being disarmed than social unrest being contained by Obama and DOJ….

Are you endorsing Graham’s view then, that the Federal government should deploy arms against citizens when it feels like it. Maybe kill your grandson with a drone strike if he goes to http://www.joinisil.com by accident. Or that the Federal military should be deployed to places like Ferguson?

If local/state law enforcement can’t handle an outbreak of civil unrest then bring in the military.

Why is it you liberals have never figured out if you are honest and don’t break the law you have nothing to worry about?

Unless you are an unborn child.

Cool. How about a gaggle of armed militia illegally congregating on a public road to barricade law enforcement from a guy who owes $300K and trespasses on federal lands? Can we call in the troops on them?

That’s what Reid was calling for not Graham.

Apparently Graham would be into though, if it was his Interior Department.

If we can just get through the next 25 to 30 years without becoming Kochistan,, my grandchildren may not have to worry about people like Graham.

Pull your hair out if you must, but the fact is that Vegas odds would give Graham a better chance of being Secretary of Defense in 2017, not knowing the presidential outcome, than any one else.
Deeper in this thread, I suggested that Graham is positioning himself for Secretary of Defense.

southmauldin  replies:
I doubt Hillary would pick him as Defense Secretary.
4  ^likes
I reply with a list of Obama’s Republican appointments.

Now I will list some of Graham’s quotes about Hillary:
“The best deal(with Iran), I think, comes with a new president,” Graham said. “Hillary Clinton would do better.”
‘I think she’s represented our nation well,’ Senator Lindsey Graham.
Senator Lindsey Graham, Republican, says, ‘She’s smart, prepared, serious.’
Lindsey Graham: “Secretary Clinton is a great choice to be our secretary of state.”
Lindsey Graham on Hillary Clinton: “We have become, actually, good friends.” “Graham quipped that his relationship with Clinton is a good example of that. ‘We have become, actually, good friends. And that was a surprise to both of us,’ he said.” [Voice of America, 2/3/07]
Lindsey Graham said if he and Hillary can’t work together, America’s best days are over.

Number one reason Hillary would pick Graham as Secretary of Defense: Graham has never sent an email.

Lindsey is the only decorated combat veteran in the field . He has earned our respect and our vote .

NEVER been in combat.
His SERVICE was to the dependents at Shaw Air Force Base.