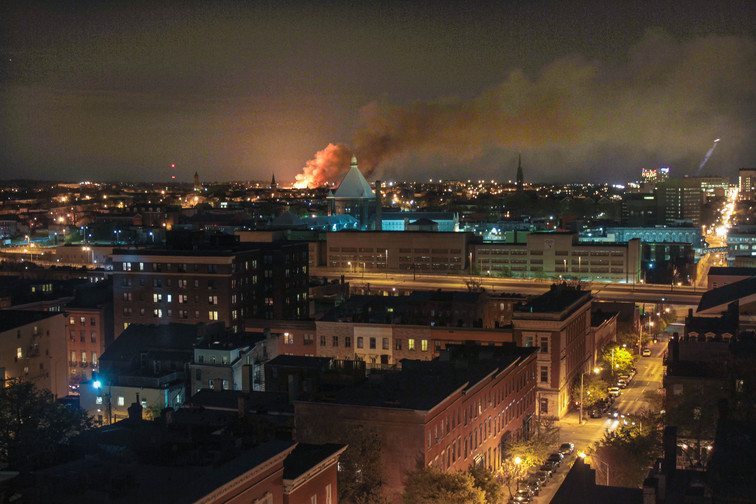 || By BILL WILSON || In the May 1 edition of The Washington Post, an opinion article by overly-credentialed professor of the Institute for Advanced Studies at Princeton, Danielle Allen, “Why the dispossessed riot,” calls for “sloughing off” the current understanding of what freedom means and embracing a new, more enlightened “democratic one.”  Stripped of all the academic jargon and tortured philosophic constructions, Allen comes down solidly in favor of a secular, government-centric, authoritarian understanding of “freedom” that would make Huxley and Orwell knowingly wince.

Allen attempts to explain and justify the riots in Baltimore as the outward expression of an alienation from the political system, a normal reaction to what she refers to as domination – quoting extensively from Princeton University professor Philip Pettit – not just by the police but by a system in which the disenfranchised have no ability to impact any decisions affecting their lives.

“To have freedom from domination requires more than just protection of the basic liberty to choose your religion, political party, associations and employment,” Allen writes, adding “it also requires an equal share of control over the institutions – the laws, policies, procedures…”

This same theory has been echoed by an army of apologists for the looters and rioters, be they in Baltimore or Ferguson or the next city to flare up.  Yet Allen never stops to consider how it is the rioters came to be so dispossessed in the first place.

There are two points to consider, however, before swallowing the Allen explanation.  First, our nation was not founded and does not rest on “government.”  From the beginning, the radical nature of the American Revolution was that each individual was free and “endowed by their Creator” to live their lives as they felt best.  Each person possessed in themselves the absolute right and power to govern themselves.  Allen disagrees totally. In her book, Our Declaration: A Reading of the Declaration of Independence in Defense of Equality, she stated, “human equality requires that each of us have access to the single most important tool available for securing our happiness: government.”

Government, for Allen, is the omnipotent presence from which all bounty flows.  Her understanding of the relationship of the individual to government is 100 percent opposite to what the Founders meant and what most Americans believe.  In her view, each person is subservient to government; government is not the servant of the people. She further rejects the warning of the tyranny of the majority.  Under her model, equality in determining the rules, government, gives everyone a “stake” and that is enough to justify the imposition of the will of the majority on everyone.

Second, Allen contends that respect for the rule of law can only really be embraced if her “democratic” view of civic engagement is allowed to take root and flourish.  But having now entered into an era where the constitutional rule of law is treated with open disdain by the White House and the bureaucracy – with a president who proclaims, “Where Congress won’t act, I will” – we already see the dangerous and destructive impact.  How such a view can lead to the very domination warned against from the government.

Allen and her allies and friends should consider another small piece of history in thinking how to proceed.  In the first years of the Jamestown settlement, a quasi-communist system was established.  Everyone was guaranteed a share of the food that was produced, and there was a general agreement of equal sharing of all goods. In those early years, the settlement came close to starving to death.  The entire colony came very near extinction.  The following years, the elders took a different approach.  If you didn’t work, you didn’t eat.  Each person was responsible for themselves and their family.  No communal anything.  The result, of course, was soon a settlement that grew and prospered.

Happiness, spiritual or material, does not come from government.  Government takes; it does not create.  Civil society – what we call social capital – as embodied in volunteer organizations, churches and places of worship, community involvement and self-help associations, these are the building blocks of a successful community.  That is the true civic virtue.  Government has nothing to do with it and cannot stop it if the people commit.

To continue reading this piece, press the “Read More …” icon below).

The Folly Of Government-Run “Free Trade”