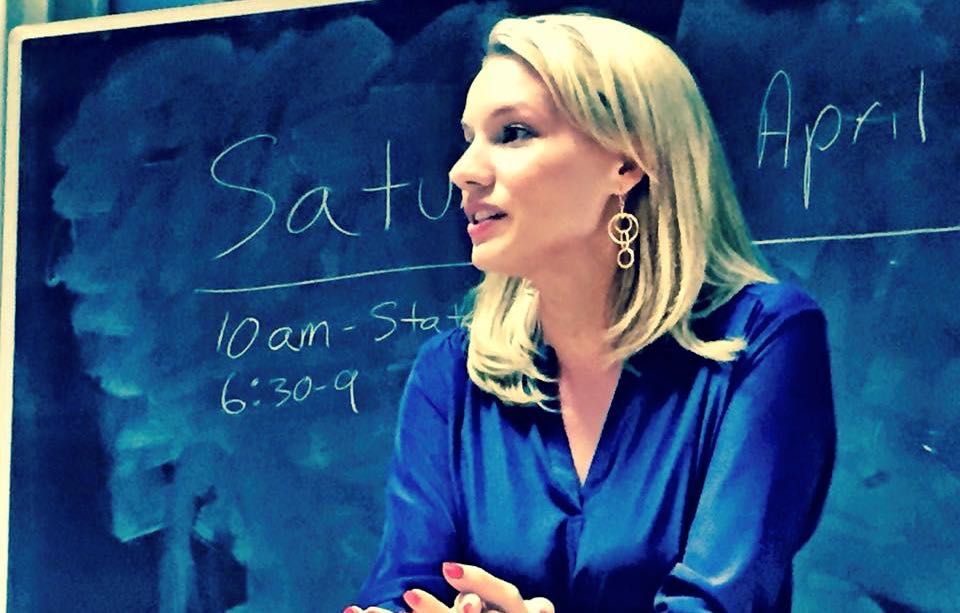 || By FITSNEWS || Randan Steinhauser was always one of our favorite young Palmetto politicos … which is why we were glad to see her escape the cesspool that is South Carolina and make a name for herself in Washington, D.C.

Steinhauser is now based in Austin, Texas – partner in a public relations/ government affairs firm she founded with her husband (former FreedomWorks staffer Brendan Steinhauser).

A graduate of the University of South Carolina (Go Cocks!), Steinhauser spoke recently on the campus of the University of Texas – which is where former Gamecock defensive coordinator Charlie Strong is currently holding down the fort as the Longhorns’ second-year head coach.

Anyway, Steinhauser had an interesting recap of her speech to the Texas Young “Republicans.”

“Former National Chairman of the DNC, Donald Fowler was one of my professors at USC,” she wrote, recalling her remarks.  “I constantly challenged him in class and pushed the limits of debating his ideas in front of my colleagues.  However, I always maintained a level of respect for our differences.  When it came time for graduation and I was eager to move to D.C., Fowler was one of my strongest advocates and even wrote one of my letters of recommendation.”

According to Steinhauser, that’s “an important lesson on the need for respectful debate and understanding that we can find common ground even with folks who we don’t agree with 90 percent of the time.”

With all due respect, it’s more like 90 percent agreement …

Still, Steinhauser makes a good point about the utility of finding common ground in the political process.

Also of interest?  Her comments reference Fowler regretting that he had to send her recommendation letter “to Jim DeMint instead of Jim Clyburn.”

Because Clyburn is obviously the epitome of “respectful debate.”

I will send her a Victim’s Rights Statement via USPS and inform her of your assault, sir…

“Still, Steinhauser makes a good point about the utility of finding common ground in the political process.”

Will….this is the epitome of your hypocrisy. This site continuously bashes every single nuanced decision by anyone. You have yet to embrace this idea that Steinhauser mentions. Indeed, if one’s name isn’t “Templeton,” then everything is wrong with their position on anything.

Vic, bashing Will is kinda not right, It’s just a forum for us to express our opinions on the issues we live in.

That could be taken as either dripping sarcasm or a dripping something else.

Wait. Not so. Will seems to support every position stated by SCPC, and by SC Senator Tom Davis.

FITS advocating for ” respectful debate and understanding”…NOW THAT is RICH, my friends…

Common ground…Yeah…FITS is all for that…The COMMON GROUND he wants is to say ALL Republicans are Racists by Definition…Submission to the IDIOCY of Climate Change Government Control through the sun….and allowing that Obamacare is good, and not a TOTAL F*#king disaster for already suffering American families……

Please…this write up is one of the most saccharine, ignorant, SC bashing piles of Bull-S#!t since Fits told us Felonious Punk was at 17% and Tom Ervin is a Republican…

What he needs is a goddamn job.

“Brendan” and “Randan”…?? Is someone trying to kid me? I’m afraid to ask what they name their children…..

hah! I finally got it!

“A graduate of the University of South Carolina (Go Cocks!), Steinhauser spoke recently on the campus of the University of Texas – which is where former Gamecock defensive coordinator Charlie Strong is currently holding down the fort as the Longhorns’ second-year head coach.”

What the what? Holy completely irrelevant reference, Batman.

I got a feeling that Jeb is smart enough to bring back civil discourse on the right. Hillary and Jeb me indeed be a refreshing sight. But the fact that the right got so out of line with Obama suggests they must have really had a reason to dislike him. I wonder what it was? Humph! I mean, he’s a Christian man, father of two girls, professional and well educated, as is his wife. Was a Senator, practices law in the private sector, was a professor, went to Ivy League schools. So did his wife, she worked for a hospital. Pretty normal people. Golly, what must have gotten people all worked up? Was it his car – a Ford Taurus? His suits? Heck the guys like your boring Uncle who helps out the kids soccer team. What could it have been? I know – it’s his basketball skills. Yeah, they disliked his basketball skills.

“But the fact that the right got so out of line with Obama suggests they must have really had a reason to dislike him. I wonder what it was?”

Because —- he’s still a piss-ant

Or because he kicked their asses in 2 elections?

..they must have really had a reason to dislike him,,

That’s why so many of the same people hate Tim Scott, Ben Courson, Condi Rice, etc.

They are not nearly as visible or audible . . . conspicuous.

That’s not even close to being the point. A lot of Repubs who literally hate Obama (and I’m not among them, as I’ve stated many times) do not do so because he is black.

In fact many of them would vote for just about any of the black people on that list. Some would vote for Michael Steele and Colon Powell as well, though neither are widely thought of as conservative these days.

Therefore, it’s just stupid to say that all Republicans who despise Obama despise him only or specifically because of his race. That’s never been the case. It really amounts to propaganda.

I would venture to guess of the people I know who don’t like Obama because of his politics, about a quarter of them have made social media comments that refer to his race. Not saying they’re racists, but I doubt they’d made comments like that if both his parents were white.

Well, sure, reference to his race is often made. His election was historic, and much was made of the fact that he is black. Not half-black and half-white (the USA dominant culture only allows for that kind of distinction in regard to totally non-African DNA combinations), but black.

At the same time, it was said that he would be a “post-racial” POTUS. He’s been anything but that. Race has been a major factor in his endless campaigning, as well as in the policies and actions of his administration. So how would race not be something used in reference to him? Often it is something like “All he cares about is the rights of black people.” Is that a racist statement, in view of his rush to judgment in several high-profile cases such as Trayvon Martin and Michael Brown, or in case of Professor Gates breaking into his own home? Or the failure of the Holder DOJ to prosecute the terroristic New Black Panther Party for their actions discouraging white voters by wielding billy clubs?

I think not. Not for every person who feels that way. Are there real, honest-to-God racists in the GOP who literally hate his guts, and even some who want him dead? Most definitely. But the bald assertion that all dislike of Obama is due simply to his race is, as I’ve always contended, nothing more than a point of propaganda, pressed again and again and again. That’s all I’m saying.

Randan and Brendan. Nice. It would have been too much, though, if she’d married Tantan.

“Hot Monkey” or not, the “painterly” effect in the pic of the fhe fetching Mrs. Steinhauser used atop this story was achieved by the deft employment of a simple Photoshop filter. Anyone with access to that program, or to Paintbox Pro, Paint.net or similar progams can do the same. Well if they are deft enough. The daft need not try it. Grand Tango.

The wrier of this article has to be a graduate of the SC School of Journalism.