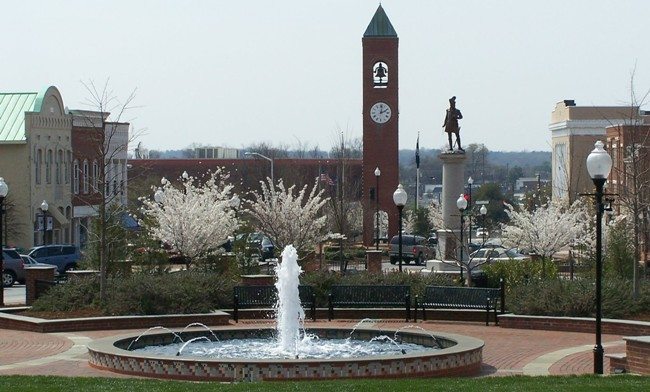 || By FITSNEWS ||  A dubious proposal to resettle dozens of immigrants in Spartanburg, S.C. (using hundreds of thousands of dollars in government funding) is drawing the ire of conservative activists – although “Republican” elected officials appear impervious to the criticism.

Former Upstate congressional candidate Christina Jeffrey is working hard to change that, though.  And while she’s been a lightning rod in the past, we’re appreciative of her efforts – which appear to be having some success (at least with local lawmakers).

“Our officials don’t care what we think, they just want to pretend to care,” Jeffrey wrote in an email to her supporters, adding that the groups supporting the resettlement “will pull out if we make enough fuss.”

Leading the controversial resettlement effort?  An organization called World Relief – which has ingratiated itself with several local religious groups in an effort to facilitate the resettlements.  Among these local groups?  “Come Closer” – which will be managing the influx of immigrants from, among other places, Syria.  These refugees are said to be fleeing the rapidly expanding Islamic State in Iraq and Syria (ISIS), but do we know for a fact that’s true?

What if they’re these Syrians?  Or these?

Anyway … the impressionable God Squad in the Upstate seems more intent on lecturing us regarding our “Christian” obligations than on delving into the details of this proposed “resettlement.”  Whether we’re talking about the entities funding it – or the costs associated with it – no one is addressing those questions.

“We are called and mandated to care for the poor, the helpless, and the vulnerable,” the group says on its website.  “It is not someone else’s job. It is in great part the responsibility and the privilege of God’s people.”

Oh really?  Then why is World Relief – whose top executive makes hundreds of thousands of dollars a year – receiving $38.8 million of its $56.8 million budget (roughly 68 percent, according to 2012 data) from taxpayer-funded grants?

Because that strikes us as government subsidization … not Christian charity.  That’s an affirmative obligation over which we have no choice – not a moral one.

Does it?  Then why did “Come Closer” refer to Spartanburg as “home to what has been identified as the 5th most dangerous neighborhood in the United States” on its website?

“We have extremely high rates of unemployment, poverty, and domestic violence,” the group added. “Overall, we were recently listed as the 4th most ‘miserable’ city to live in our country. It does not take long to realize that we are a city in need of transformation.”

Jeffrey has specifically cited the public safety angle as well as the costs it could impose on local communities.

“Contractors are well paid by the State Department to settle refugees, but after six months the newcomers are often on their own,” Jeffrey wrote in a recent opinion-editorial published by The Herald Journal.  “If they settle here, the residents and taxpayers of Spartanburg County may be on their own to figure out how to help them, because by then World Relief may be taking care of a new crop of refugees.”

In an email to her supporters, Jeffrey further laid out her case.

“There is not a single place in the United States that has been able to limit the flow of refugees once a contractor like World Relief opens an office,” she wrote. “In other words, once the gate is opened, the flood will pour through and Spartanburg will never be the same. It is one thing to be an ‘International City.’ It is quite another thing to increase the population of a county with people from other cultures and backgrounds who have never lived in the West, are uneducated and lacking in employable skills, who do not speak English and who have children who do not speak English. Our ‘internationals’ are not going to take care of the refugees; our taxpayers will in a multiple of ways. They need to know what they are being signed up for.?”

Adding another layer of intrigue to the mix?  The ideological roots of those propping up these “evangelicals.”

These groups are pumping millions of dollars into promoting these organizations so they can get tens of millions in government subsidies.  Nice racket, huh?

Obviously this wouldn’t be the first time groups affiliated with Soros have preyed on the vulnerability of intellectually incurious “conservatives” in the Palmetto State.  Just look at the campaign we exposed years ago to support U.S. Senator Lindsey Graham – who was the only “Republican” in the entire U.S. Congress to support a massive energy tax pushed by Soros and the far left.

Remember that duplicity?  Here’s a refresher …

One lawmaker is responding to the concerns of the community – even though she’s been a consistent supporter of church missions and has participated in many such missions at the local, national and international level.

S.C. Rep. Donna Hicks says the program “looks like a great opportunity” to help others – but quickly added “we as a community need more time to vet this.”

“We need much more information on this proposal than we’re being provided – and it’s up to those of us whose constituents and communities will be impacted to insist on that information,” Hicks told FITS. “There are serious concerns that have not even remotely been addressed, and until they are addressed there is no way we should subject our communities to unnecessary risk or cost.”

Faith-based compassion is a wonderful thing, but just as one’s religious beliefs shouldn’t be imposed on another without consent … neither should taxpayer obligations based on those beliefs.  Especially under such shady circumstances.