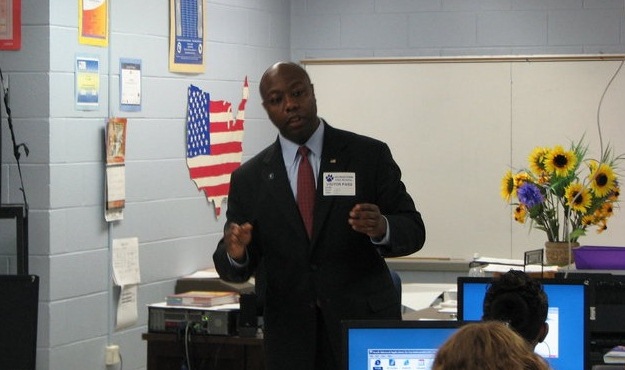 “SEE WHAT HAD HAPPENED WAS …”

|| By FITSNEWS || Earlier this week we posted a humorous item about an error committed by the American Conservative Union’s Conservative Political Action Conference (CPAC).  This, of course, is the annual lily white “exclusive” gathering of “conservative” political operatives in Washington, D.C.

Both Carson and Scott are black.

Eager to refute the embarrassing “white people think all black people look alike” headline, CPAC’s first response to the gaffe was to … get this … accuse reporter Ben Terris of The Washington Post of manipulating the image he tweeted.

“I’ve spoken with the web people who verified that it was definitely photoshopped,” Hemminger continued, vowing to provided the website with evidence of his claim.

CPAC also tweeted that it “did NOT mix up” the photos of Carson and Scott … and “conservative” website RedState.com echoed this claim.

Another CPAC tweet expressly claimed “we didn’t make the error.”

Oddly enough, the photo glitch – which only applied to the mobile version of CPAC’s website – mixed up all sorts of images (Including those of caucasian and Indian elected officials).  In fact there’s a detailed follow-up story in The Washington Post which exonerates the paper’s reporter … and puts the ball squarely back in CPAC’s court.

So … will they admit their mistake?  Especially now that it seems clear it was a glitch that had nothing to do with mistaking one black politician for another?