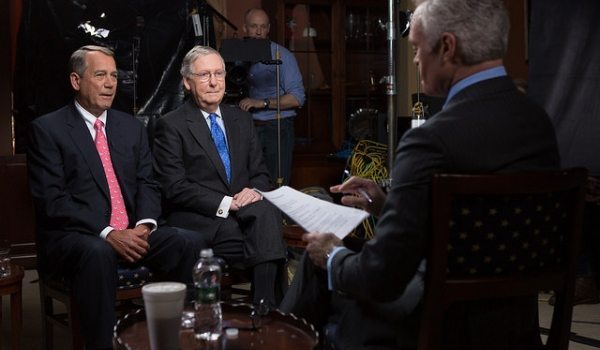 That was Senate Majority Leader Mitch McConnell’s (R-Ky.) January 15 take on House-passed legislation to fund the Department of Homeland Security this year while prohibiting the administration of Barack Obama from granting executive amnesty to 4.5 million illegal immigrants with U.S.-born children.

McConnell did offer that passing the House bill would “be our first choice,” but added “if we’re not able to do that, then we’ll let you know what’s next,” indicating the measure might not garner 60 votes needed to reach cloture and overcome a filibuster.

Have Senate Republicans already given in to Obama’s executive amnesty before a single vote has been held in that chamber?

“It’s uncanny to me that our leadership… is already sending the message that we’ve already lost this battle,” Labrador said.

Most recently, on January 22, McConnell told reporters, “It’s an important piece of legislation and we’ll decide in February how to handle it but at the end of the day we’re going to fund the department, obviously.”

In the meantime, this is probably not how now-Senate Minority Leader Harry Reid (D-Nev.) might have approached a similar issue when he ran the Senate.

In 2010, when it came to passing the Dodd-Frank financial legislation, Reid just kept holding cloture votes to get on to the bill as Senate Republicans attempted to mount a filibuster …

Ron Paul: Reform Is More Than Defeating “The Core”