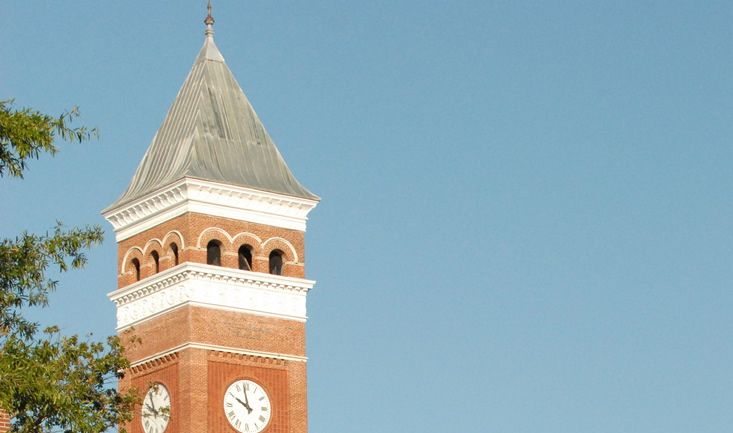 By FITSNEWS || Clemson University has fired its student affairs vice president in the wake of the Tucker Hipps’ scandal.

Gail DiSabatino – who held the post for eight years – was unceremoniously dumped by the school this week and replaced by Almeda Jacks, who retired from the school in 2006 after serving as student affairs vice president for fourteen years.

Jacks will serve in an interim capacity until a full-time replacement for DiSabatino can be named – which is ironic considering she’s a consultant for a firm that’s paid by colleges and universities to, among other things, conduct “executive searches.”

“We know (Jacks) can count on the full support of the Student Affairs staff and student leaders during this period of transition,” Clemson president James Clements said in a statement. “We are all committed to ensuring that our students have the support and services they need to be successful.”

Successful … which last time we checked started with students staying alive (which has proven problematic in Tigertown).

DiSabatino’s demise can be traced directly to the fallout from Hipps’ September death – which sources tell FITS was linked to a fraternity ritual.

Hipps – a former high school football player – died as a result of head trauma sustained during an “unsupported fall” from a bridge near the Clemson campus.  His fraternity brothers say he fell behind during an early morning fitness event, but multiple sources tell FITS the bridge Hipps fell from is linked to a “particular tradition” for Hipps’ fraternity, Sigma Phi Epsilon.

DiSabatino suspended all fraternity-related “education” activities in the wake of Hipps’ death, but she was clearly unable to get a handle on the situation.

Local police are reportedly close to issuing their findings in the Hipps’ investigation.

“There is more to the story then what has been told,” Gary Hipps told WYFF last week.  “We do believe there are things that need to be fixed that are broken with fraternity pledging processes.  No parent should send their child off to college and have to fear for their life.”

“I think there are elements of the truth that are not yet known and those are answers we’re looking for,” Cindy Hipps added.

All I can say is WOW!

Is your comment because of the situation or because you think she is a steaming-hot dame?

“Jacks will serve in an interim capacity until a full-time replacement for DiSabatino can be named – which is ironic considering she’s a consultant for a firm that’s paid by colleges and universities to, among other things, conduct “executive searches.””

Let me tell you what is ironic. What is ironic is that your sources for information regarding the Tucker Hipps tragedy and other Clemson related events didn’t tell you how lucky Clemson is to have Almeda Jacks available for the interim role.

Almeda has served Clemson and her contemporaries, including myself, admirably and faithfully in multiple roles since we graduated a long time ago. Others should be so lucky.

Almeda is tremendous. Glad they were able to talk her into coming back.

Frank Howard – are you still alive?

I have a ghost writer and I’m here in spirit.

Maybe they will hire Anna Edwards from USC. She’s a full blown tater. She’s real good at lying and is bad at her job. She’d be perfect for Clemson

BS, they are going to hire Whammy.

She was a train wreck of an edu-crat at Clemson and at Georgia Tech before that. She was disliked by students and organizations, and lost support of the administration with her flailing around the past few years. Good riddance. Hopefully they can find someone who can bring people together rather than drive them apart.

Funny how Fits always seems to have multiple sources all the time. If you’re that good why are you just a rag tag quasi news site? This article was not news and was well known to have taken place some time ago and unrelated to your assumption. Sorry Fits, you’re just slow and a stupid.

Yet here you are. Reason with that.

Yep, observing just how stupid you and others are. You can’t cure stupid.

Reason with that. I’m sorry you can’t because you’re stupid.

As a student at Clemson, Gail has been an amazing advocate for Greek life and students rights. It makes me sick to see such ignorance and ashamed to be at a school where parties matter more than lives – literally. Before you bash Gail, get to know what she does. She funds a program providing free water to parties to help prevent overconsumption of alcohol and protect students, without prohibiting drinking altogether. Gail has done many amazing things for Clemson but she alone cannot incite culture change to protect our students. She will be sorely missed by students and I hope all of y’all bashing her will explore the truth before posting ignorant comments.

It appears we have a future IROC in the making.

Proof that the word “amazing” is now the most overused word in the dictionary. As for free water, how about some free mace, free condoms and free morning after pills?

“As a student at Clemson, Gail…”…Honey, you are the student. Gail was an administrator. You sure you aren’t in the Bridge Program? Carry on.

She’s got two errors in the first sentence. In the next sentence she accuses others of being ignorant. Next she says (I think) parties “literally” matter more than lives at Clemson?

I’m sorry you feel the need to correct grammar rather than take responsibility. There’s a special place in Hell for people like you.

I’ll take a regular place in Hell, thanks. Probably a lot of sanctimonious folks there too. I’ll save you a seat at the bar.

Provides free water to parties? Y’all ain’t got a faucet?

missed by which students? There are a whole bunch of us thrilled to see this mistake made by Barker corrected!!

Has anyone considered the possibility that she was let go because she attempted to do the right thing? After all, she turned over to law enforcement a series of complaints that seemed to include some illegal / criminal acts — beyond the Hipps situation. Clemson administrators cannot stand someone curbing their ability to pretend certain things never happened. They are accustomed to keeping future donors free of police records. Firing her now looks like they are taking action over the death of a student, but I suspect she is also being punished for not keeping a lid on various embarrassing situations.

Its always a conspiracy at Clemson, huh?

No, sometimes panic enters the picture.

Please tell me what your “multiple sources” were. I’m a Clemson student and I never heard more than “suspicion” that Tucker died as part of a ritual and they never confirmed that his death was linked with hazing. If someone actually came forward and said that, it’d be big news here and SigEp would be kicked off campus. The students who died at Clemson this year, besides Tucker, didn’t die as a result of anything the school administration did. Virginia Gillam had a medical condition and Kendall Wernert’s death wasn’t associated with any Clemson organizations. By the way, you didn’t finish your train of thought about what the Hipps family thinks the pledging process was.

It appears we have another IROC in the making.

Whats the International Race of Champions have to do with this?

I know you been hoping someone would ask.

He quoted the Hipps family accurately. They were on WYFF. As for news being all over Tiger town, you might want to wait until that investigation is made public. The sheriff is already rolling back his statements and somebody is going down.
You really should read the news everyday. Not just on the one day when your topic is being reported on. Child.

Let’s all judge Gail DiSabatino now. We can get the facts later.

I knew DiSabatino during her days at GT when I was a student there and have always despised her. Having close connections to Clemson I was dismayed when they hired her. I am thrilled that they finally dumped her.

Aw did she get you in trouble too? Seems like a personal problem.

College kids just do stupid things. I was going to give an example from my own experience at college, but it was so unique, that if repeated I would feel responsible for giving them the idea.

Was it the incident (rumor?) where several girls found all of their pantyhose stuffed with sand? They had to throw them away because they didn’t know if anything else was mixed with the sand.

No! A national president of sorority sneaked sisters into her hotel penthouse suite she had reserved for herself only. I wasn’t in the frat, but my friend was and he knew I could sneak in undetected. I had done it before when it was unoccupied and let my girl in and we spent the night.
I’m not revealing how it was done because it is still possible and a little bit dangerous. It was not by using the door. The sorority didn’t turn us in because the sisters weren’t supposed to be there. We didn’t have much of a plan when we got in but we scared them to death.

You’ve just confirmed to me how stupid fraternities/sororities can be.

CORRECTION: How stupid kids can be!

I’m still trying to understand what a supported fall constitutes.

Turtle:
Euwe what more do you need to convince you
That you’ve made it, and you’re easily as strong
As the filth from ABC who rape our conversation,
And who’ve terrorized our posting for so long.

UVA goes crazy over a poorly sourced rape story and Clemson – and, local law enforcement? – goes la-dee-da, la-dee-da over 2 fraternity related deaths.
What is wrong with this picture?

To expect one person to change a culture is ridiculous. Obviously this VP did not have the support of the rest of the institution to do what really needs to be done to change the greek system. I’m sure the powerful alumni would never allow such measures to take place…I blame the President for not supporting stronger actions early on.

This article literally has zero facts in it, save for maybe the one about Jim Clements being Clemson’s president. Almost nothing in this article is confirmed. Y’all are trolls, and not particularly good ones, either.

So distasteful that you would mention Michael in this post and you couldn’t even spell his name correctly. His fraternity brothers loved him and were-and still are-heartbroken that he died.

Here is this academic year’s fraternity death roll so far. Aside from Mr. Hipps, five other students have died in fraternity related incidents.

If this administrator was an advocate of so called “Greek life” instead of a dismantler of it, she deserved to be fired