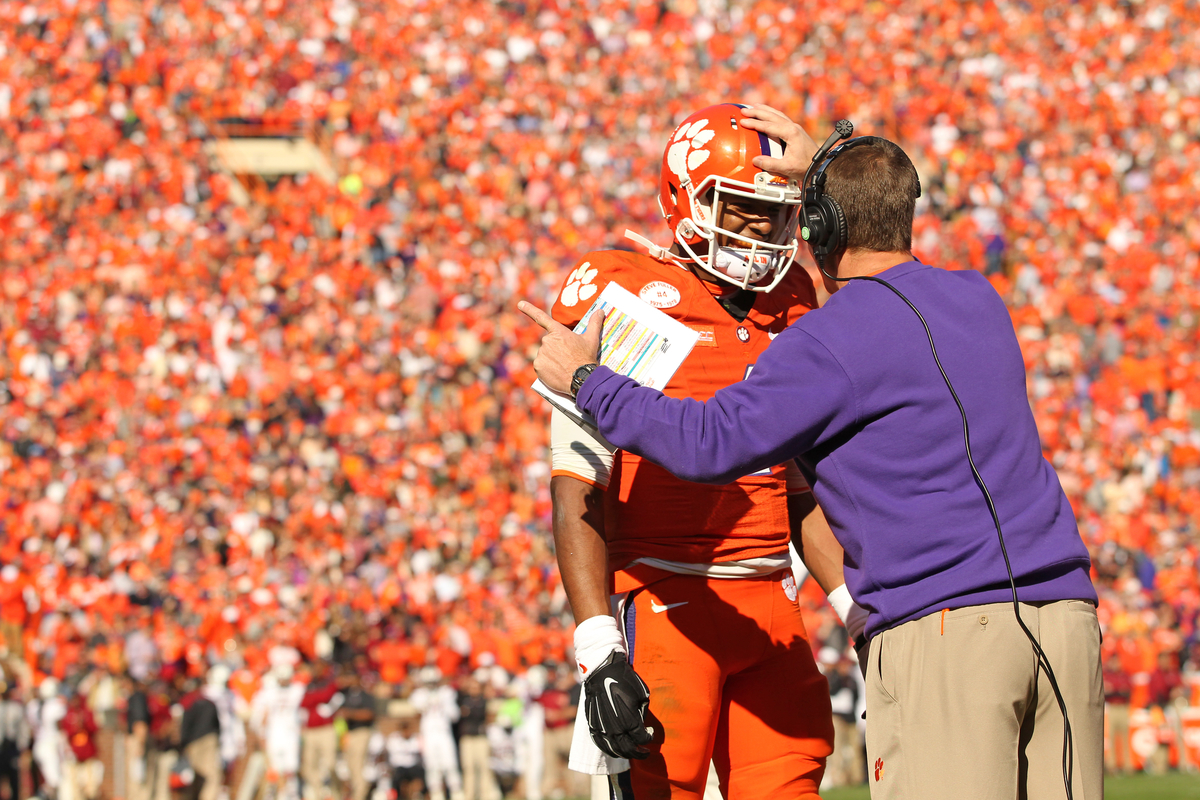 A 35-17 Clemson win that was never really in question – and an emphatic end to the Tigers’ five-year run of futility in the newly christened “Palmetto Bowl.”

“Things are back to how they should be,” Clemson football’s official Twitter page noted.

Clemson hadn’t tasted victory against their in-state arch-rivals since November 29, 2008 – the program’s longest losing streak in the 112-year history of the series.  In fact this was Clemson head coach Dabo Swinney‘s first victory over the Gamecocks since he was named the head man in Tigertown (Swinney’s 2008 win came as the Tigers’ interim head coach).

Leading the way for the Tigers (9-3, 6-2 ACC) was Watson – who was in middle school the last time Clemson beat Carolina.  The freshman phenom – still suffering the lingering effects of a left knee injury sustained two weeks ago against Georgia Tech – completed 14 of 19 passes for 269 yards and a pair of touchdowns.  He ran for two additional scores, including a put-away touchdown with 2:35 left in the fourth quarter – capping a nine-play, 75-yard drive that featured nothing but running plays. 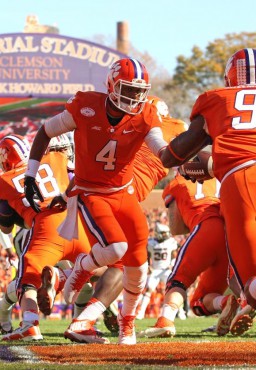 Of course Watson’s biggest news came after the game – when Clemson’s coaches revealed he had played the entire game with a torn anterior cruciate ligament (ACL) in his injured left knee.

Meanwhile Gallman – who watched last year’s game from the sidelines as a redshirt – rumbled for a career-high 191 yards on 27 carries against the porous Gamecock defense.

And yet another freshman – wide receiver Artavis Scott– raced past the Gamecock defense for 185 receiving yards, many of them coming on sweep plays that were more rushes than receptions.  Whatever the plays were called, the Gamecocks (6-6, 3-5 SEC) couldn’t stop them … which has been the story of a season in which Spurrier’s squad was supposed to contend for a national championship.

(RELATED: THE PALMETTO BOWL IN PICS)

South Carolina surrendered 491 yards in what could (and probably should) be defensive coordinator Lorenzo Ward‘s final game.

On the other side of the ball the Gamecock offense simply couldn’t establish any consistency against a Tiger defense that entered the game giving up fewer yards per game than any unit in the NCAA.

“I can’t say much more about these guys,” Clemson defensive coordinator Brent Venables said. “They’re incredible and the best group of guys I’ve been around. They deserved this. These guys have been on edge and they were so hungry for this game today. They played with incredible passion.” 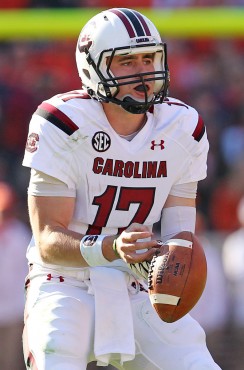 South Carolina ran for a season-low 63 yards – while fifth-year senior quarterback Dylan Thompson was pressured all afternoon by the Tigers’ defensive linemen (led by All-American Vic Beasley). Thompson was sacked four times and committed a costly fumble (one caused by Beasley) in the first half that set up the Tigers’ second score.

He finished the game completing 21 of 39 attempts for 249 yards with one touchdown – a fourth quarter strike to wide receiver Damiere Byrd.

Thompson did set South Carolina’s single season record for passing yardage in the game – breaking the mark of 3,206 yards set by Todd Ellis in 1987 – but it was little consolation for Gamecock fans.

After four years of unprecedented success, the refrain of “wait ’till next year” is once again being heard in Columbia, S.C.

South Carolina’s six losses in 2014 equal the number of games the program lost over the last three seasons – combined.  In fact if the Gamecocks drop their bowl game, they will have lost seven games for the first time under Spurrier (and the first time since 2003).

That’s quite a precipitous decline for a team that started the 2014 season ranked No. 9 in the nation.

UPDATE: No, the headline is not a typo.

The Palmetto Bowl In Pics