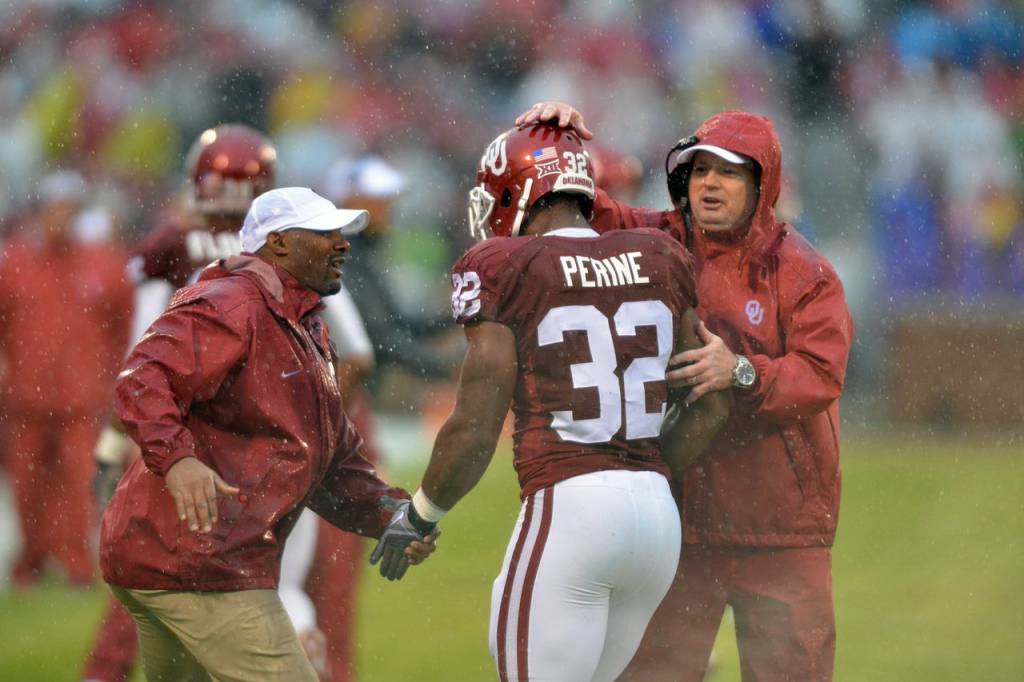 By FITSNEWS  ||  Prior to this season, only one NCAA running back had ever eclipsed the 400-yard rushing mark in a single game – Ladanian Tomlinson of Texas Christian.

Many thought Tomlinson’s mark would stand forever … until it was broken twice within seven days.

Fifteen years after Tomlinson’s record 406-yard romp against UTEP, a pair of running backs eclipsed his mark in back-to-back weeks.  First it was Wisconsin’s Melvin Gordon III – who ran for 408 yards on 25 carries last week against Nebraska.  On Saturday it was Oklahoma true freshman Samaje Perine, who ripped off 427 yards on 34 carries against the Kansas Jayhawks.

Making Perine’s accomplishment even more impressive?  The 19-year-old from Pfllugerville, Texas didn’t even start the No. 21 Sooners’ muddy, rain-soaked game against the Jayhawks – and sat out the final 12:16 of the fourth quarter.

Perine scored the first time he touched the football – a 49-yard jaunt on the opening play of Oklahoma’s second possession that put the Sooners up 7-0.  Other than that he was held in check during the game’s first twenty minutes  – sitting out Oklahoma’s third possession and picking up only 16 yards on six carries on the Sooners’ next three series.

Nothing to write home about, in other words …

When his team got the ball with 9:53 left in the second quarter, though, Perine took over the game – picking up 157 yards on his next eleven touches (including scoring runs of 33 and 34 yards).  When the 5-foot-11, 243-pound tailback ripped off a 66-yard touchdown run on the Sooners’ first play of the third quarter, Tomlinson’s – err, Gordon’s – record was within striking distance.

And on Oklahoma’s second play of the fourth quarter, it fell.

Even more impressive than his on-field exploits, though?  His selflessness.  According to several of his teammates, Perine told his position coach Cale Gundy to “put in one of the other guys” in the fourth quarter because “the record (was) not important.”

Good for him … that’s an example young players should seek to emulate.

The Brawl: Ten Years On