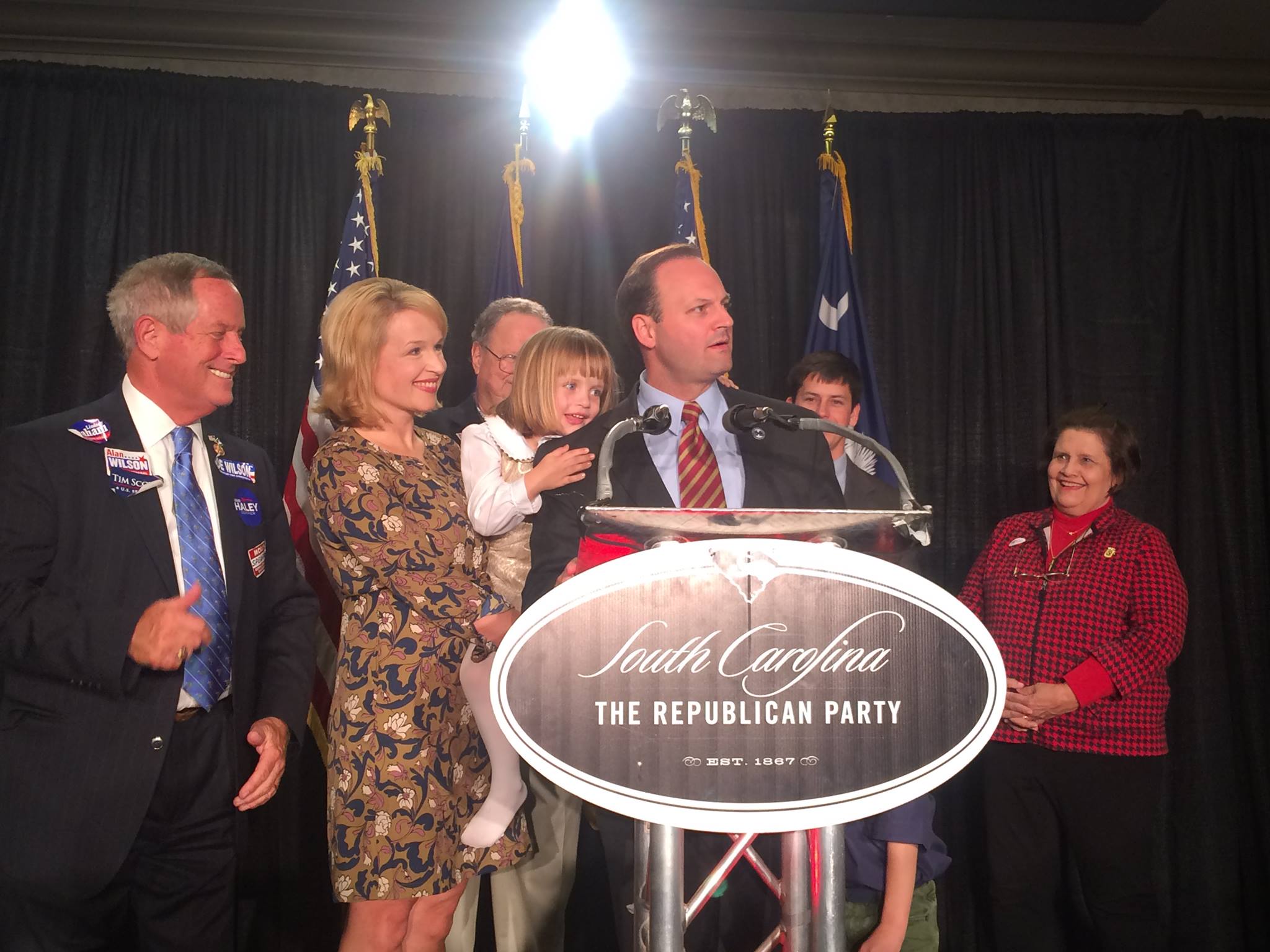 By FITSNEWS || Like most “Republicans” in the Palmetto State, S.C. Attorney General Alan Wilson had a very big election night.  The first-term attorney general – who has led prosecutions bringing down S.C. Lt. Gov. Ken Ard and S.C. Speaker of the House Bobby Harrell – scored a resounding win over his Democratic opponent, Parnell Diggs.

Unlike most of the GOP candidates on the ballot, Wilson has been non-political … he’s also been decisively relentless in his pursuit of corruption in state government.  In the process he’s earned a reputation as a straight-shooting boy scout … and, as this website has noted, the best could be yet to come on that front.

So … are there any blind spots in Wilson’s presumed political ascent?  Possibly …

Rumors abound regarding the circumstances of his decision not to investigate S.C. Gov. Nikki Haley for her various ethical indiscretions.  We’ve been assured by sources within Wilson’s office that the Haley case went through the same process as the cases involving Ard and Harrell – and that any decisions related to it were subjected to the same criteria.

Of course Haley’s case never saw a public courtroom – instead it was whitewashed by a jury of her former colleagues in the S.C. House of Representatives, where Haley served from 2005-11.

Wilson’s prospects for higher office – be it governor, U.S. House or U.S. Senate – seem bright.  And with good reason.  He’s one of only a handful of GOP officials who has “walked the walk” when it comes to cracking down on public corruption – something this state sorely needed.

“Unlike most of the GOP candidates on the ballot, Wilson has been non-political … he’s also been decisively relentless in his pursuit of corruption in state government. In the process he’s earned a reputation as a straight-shooting boy scout … and, as this website has noted, the best could be yet to come on that front.”

Come on Will. I really give you credit for better than this drivel. So, we get four more years of jock sniffing, no action taken on the Lexington Crime Ring (who happen to be asshole buddies with his dad), no action taken on the Columbia/Richland Crime Rings and associated splinter groups, possible more disdain for citizens who used deadly force in self defense, and the like.
How is this a good thing?

While I like Alan Wilson, I have to agree, he needs to start kicking in a few doors and slapping some stainless steel bracelets on some of our political lowlifes.

Guess who put that smile on Joe’s face? Umm huh

His old man seems to be giving his wife the most lecherous look I’ve ever seen.

She’s one of the WIS anchors from the “pound puppy” days over at the iodine state. Jennifer Miskewicz was her name I think.

Pound puppy is right. Woof. I suppose you’ve never seen her close up. Pale, cankles, and looks 10 years older than she is.

LMAO…Wilson prosecuted Republicans – like FITS persecutes – so he makes the FITS-GOP-paranoid HOF….

i think its beyond question that Wilson has exceeded expectations, any way you slice it, he went after the then most powerful politician in the State, he didn’t back down and he hit all his marks, he also didn’t gloat or showboat, he’s earned our respect

and as for the wife, he has clearly out-kicked his coverage, well don

Am I the only one that thought this was a reference to Diggs and chortled accordingly?

I thought you were against wasteful spending. How much is Wilson wasting fighting the gay marriage ban that we all know is just going to be offed in court?

True. But what can you realistically expect here in South Carolina? It seems like a pipe dream to expect we can get an AG who goes after corruption AND has the backbone to tell social conservatives when they’ve already lost.

Like most Republicans ,Fits is only against spending money on things that he opposes.

Gay Marriage?Outwardly Fits seems to have no problem with it.And why should he?Hes a “libertarian ” right?(heh,heh, heh)

But every time the subject comes up he seems to damn the whole matter with faint praise,i e, long commentary on the act of marriage itself, concern for Churches, various irrelevancies etc etc.

Seems like Fits is at war with his inner Republican self.

Because of course you’re right,where is his outrage on this “fiscally liberal” use of the taxpayersmoney on this lost cause and his corresponding blast at his buddy Wilson(also a Republican).

Yeah, we should probably just have attorneys general disregard provisions of the state Constitution that haven’t been overturned because it might be expensive.

I know what you mean.

We all remember how the state of South Carolina fought tooth and nail to maintain the Segregation laws a scant fifty or so years ago.

Funny thing,no one wants to talk about that “defense” of the state Constitution anymore.

I wouldn’t worry too much.

Oh bout twenty years from now ,no one will want to talk about this and ,like the old Segregationists ,these new haters will be giving us their version of,”Well I was just upholding the State Constitution.See I never really believed…..”

It is truly a great day in South Carolina!

He was the only Republican I voted for. And it’s not a partisan thing. If he would also expose the crooked Democrats in my state, next time I would vote for him twice! *joking*