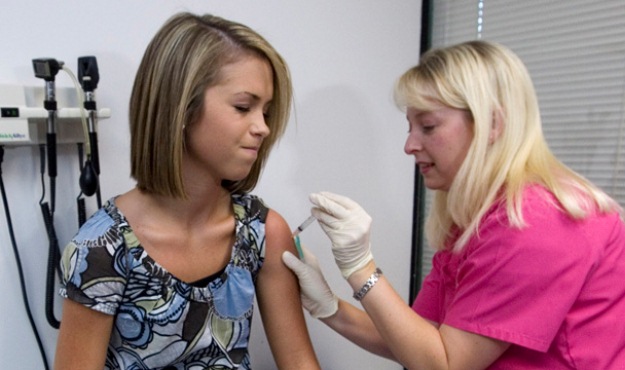 HOW CHOOSING NOT TO VACCINATE YOUR CHILDREN PUTS SOCIETY AT RISK

By Liz Gunn || I know this subject has been discussed ad nauseum, and depending on your interest level in this debate  -I may or may not have anything new to offer. But it’s something I can’t help but think of often, especially as we enter into flu season.

I took my 14 month old for a flu shot this morning, and my husband I have made plans to get our flu shots over the next few days. Two years ago, I was one of those people who had never gotten a flu shot. I depended on herd immunity to keep me well. Little did I know, I was behaving like one of those people I would grow to be so frustrated with now that I have a child.

Herd immunity is basically what parents of unvaccinated children depend on. I don’t have a problem with that if your child can’t receive vaccines for a legitimate reason. I do however take issue with parents who choose not to take the supposed risk of vaccinating, and put their children as well as others at risk for dangerous, communicable diseases.

I try very hard not judge other families and the decisions they make regarding their children. I want to believe that we are all just trying to do the best we can. You want to give your kids Mountain Dew and Pixie Stix for breakfast? Hey, who am I to judge? But when parents make decisions that they feel are best for their family that in turn affect my own family – then yes, I am going to judge you.

Recently, someone sent me a chilling article written by a mother who has a child with leukemia. Her son, while vaccinated, now has a severely compromised immune system thanks to chemotherapy. The school he attends moved him to a different class because, not one, but two unvaccinated children were in his originally assigned classroom.

How terrible for this mother, who made the decision that she felt would best protect her child, to now have to worry about this (on top of everything else she is dealing with) thanks to others electing not to do the same.

I know the government cannot make people get vaccinations, nor do I believe they should. But I can’t for the life of me understand how a parent comes to the conclusion that not doing so is best for their family. There has been zero, yes ZERO, evidence to support that vaccinations cause Autism, even though Jenny McCarthy (former Playboy playmate, mind you) had no trouble convincing a lot of people otherwise. Turns out her son never actually had Autism either, for what it’s worth.

That’s the standard answer from most “anti-vaxxers”, as they’re called these days. It’s a movement that is on the rise, and likely why we have started to see outbreaks of diseases that were all but eradicated from this country twenty years ago. The anti-vaccination groups will offer you a lot of “studies often show” or “we see a trend”, but rarely back up their decision with proven, medical science.

Someone challenged me once by asking, “Well if you do vaccinate your kids, what do you care if mine don’t get vaccinated?” Well, smarty pants, for a very good reason actually. You see, at the time I had a six month old – which means she was not yet eligible for some important vaccinations –  like Measles, Mumps, Rubella, Varicella – and was not old enough to receive the full dosage of others like Polio, Hep B, DTap, etc.

Parents who think their decision not to vaccinate isn’t making an impact need to think again. It’s not just a coincidence that as of August 22 there had been nearly 600 measles cases reported in the United States this year. That is the most since 1994, according to the CDC.

Measles is most often introduced here by unvaccinated Americans who travel to areas where measles is prevalent. Measles is extremely contagious to both unvaccinated and under-vaccinated people of all ages.

Safe to assume that in the United States if everyone who was eligible got vaccinated, it would hardly matter if Americans traveled to and from places where things like Measles and Mumps still exist. Thanks to vaccinations, the US has all but eliminated these diseases; but, not for long if this anti-vaccine movement continues.

Do I think vaccines are 100% safe and without risk? Of course not. I strongly believe every parent should do their own research. I am very supportive of vaccinations being heavily regulated and continuously studied. Do I believe that the risk of getting my child vaccinated outweighs the risk of my child possibly contracting a life threatening illness? Absolutely not.

Almost any prescription drug on the market has potential side effects, and vaccines are no different. A lot of people with high cholesterol take Lipitor, for example, even though its possible side effects are “unexplained muscle pain, confusion, fever, unusual tiredness, weight gain, increased thirst, increased urination, hunger, dry mouth, fruity breath odor, drowsiness, dry skin, blurred vision, weight loss; or nausea, upper stomach pain, itching, loss of appetite, dark urine, clay-colored stools, jaundice.”  Why? Because they’re only possible side effects, not guaranteed. At the end of the day it still beats the alternative.

Standard vaccinations are usually covered by insurance and offered free of charge for those who are uninsured or underinsured. People may not have a lot of faith in the Center for Disease Control right now, but their website is actually a good place to start for the basic information regarding vaccinations. At the very least I urge you to get your information regarding vaccines from reliable, medical sources – not blogs or opinion pieces…even this one.
Liz Gunn is a wife, mom, travel enthusiast, food snob, daydreamer and lifelong Gamecock fan. A graduate of the University of South Carolina, she lives in Columbia, S.C. with her husband and daughter.

The Other Side Of “Marriage Equality”