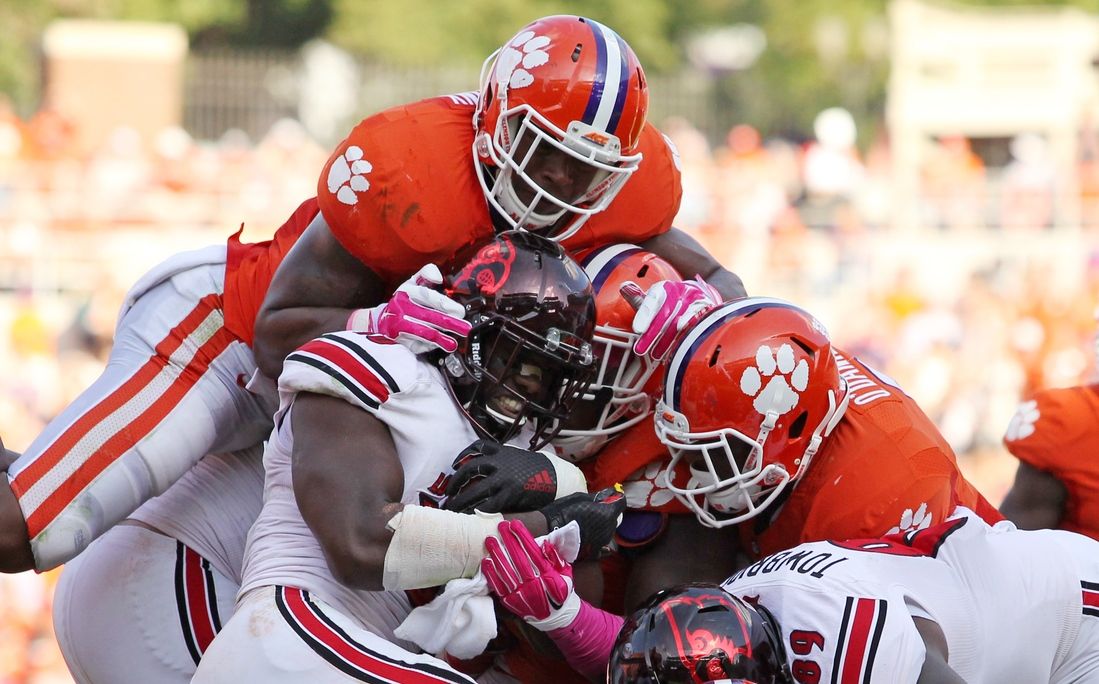 By FITSNEWS || Clemson University’s football team lost its offensive leader … but managed to hang on for a win over Louisville anyway.

With true freshman starting quarterback Deshaun Watson watching from the sidelines with a broken finger, Clemson’s offense sputtered – failing to score a touchdown and picking up a season-low 229 yards in total offense.

It didn’t matter, though … at least not in this game.

The Tiger defense stopped Louisville on fourth-and-goal from the Clemson two-yard line with less than half-a-minute on the clock … moments after sophomore safety Jayron Kearse made a game-saving tackle on a 73-yard pass from Cardinals’ quarterback Will Gardner to wideout James Quick.

Clemson’s “D” also provided a touchdown – with senior defensive tackle Grady Jarrett recovering a fumble in the end zone for a critical second quarter score.  The other Clemson touchdown was a 72-yard punt return by Adam Humphries after Louisville went three-and-out on its opening drive.

The Tigers (4-2, 3-1 ACC) are going to have to continue relying on big defensive and special teams plays as their season moves forward – without Watson.

The 6-foot-3, 190-pound true freshman – who has electrified the Clemson program since taking over the starting quarterback position three weeks ago – suffered a broken right index finger while stiff-arming a Louisville defender on a run late in the first quarter.  Watson stayed in the game for two plays after the injury but was clearly in pain and unable to throw the football.

It’s not immediately clear how much time Watson will miss with his injury … but Clemson is clearly not the same team without him.

Cole Stoudt – who began the season as the Tigers’ starter – struggled to move coordinator Chad Morris’ up-tempo offense against the Louisville “D,” which entered the game ranked fifth in the nation in total defense and scoring defense.  Stoudt completed 20 of 33 passes for 162 yards with no touchdowns and one interception against the Cardinals (5-2, 3-2 ACC).

He will likely get the starting nod next weekend as the Tigers hit the road to play the Boston College Eagles.  And several starts after that.  In fact at this point, the best case scenario for Watson returning to action would be against Georgia Tech on November 15.