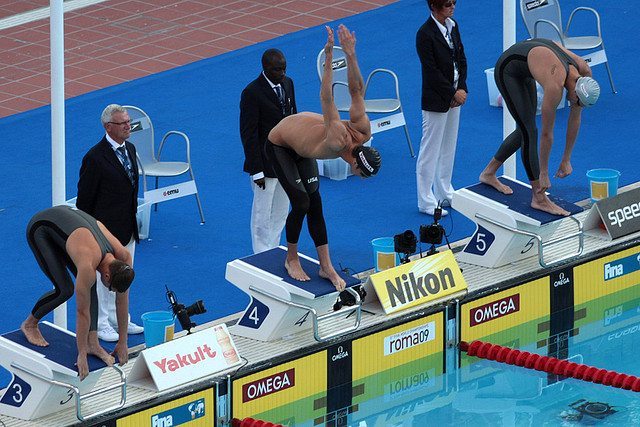 By FITSNEWS  ||  Michael Phelps – the most decorated Olympic athlete in history – is now racking up some unfortunate laurels.

According to the Maryland Transportation Authority police, the 29-year-old swimming champion was pulled over at 1:40 a.m. EDT on Tuesday after an officer observed his 2014 Land Rover speeding and crossing double lane lines in the Fort McHenry Tunnel on Interstate 95 near Baltimore.

Phelps, who hails from Towson, Maryland, failed a field sobriety test and was arrested on suspicion of driving under the influence of alcohol.  He was reportedly clocked traveling 84 miles per hour in a 45 mile-per-hour zone at the time he was pulled over.

Wow … can’t wait to see the dash cam video from this stop.

Phelps was previously arrested for driving under the influence in 2004 – at the age of 19.  In 2009, while visiting the University of South Carolina, Phelps was photographed taking a hit from a bong.

At three Olympic Games in Athens (2004), Beijing (2008) and London (2012), Phelps won a combined 22 medals – including 18 gold medals.  The world record holder in the 100-meter butterfly, 200-meter butterfly and 400-meter individual medley, Phelps hung up his cap following the London games but came out of retirement in May of this year – participating (and winning) an event in Charlotte, N.C.

According to WBAL TV 11 (NBC – Baltimore), Phelps was “cooperative throughout the process and was later released.”

95 MPH. Please, he ain’t got nothing on Andre. He should stick to driving in the Palmetto state, provided he can shed the paparazzi when taking a toke.

Here’s how we extend Phelps career and get another gold medal in swimming for the US:

We fill the pool with beer.

We here at FITS see nothing wrong with this behavior. Seeing as no one got hurt, and all. We should all be free to drive 84 in a 45, drive while intoxicated, and take hits from a bong.

Better, if you are actually able to do 84/45 while intoxicated and take hits from a bong, DUI doesn’t really apply to you. You’re already better than 80% of moms driving mini vans and texting.

Don’t forget the makeup too.

So the incident on Blossom Street with him and weed was not an “isolated incident.” He’s officially an alcoholic stoner.