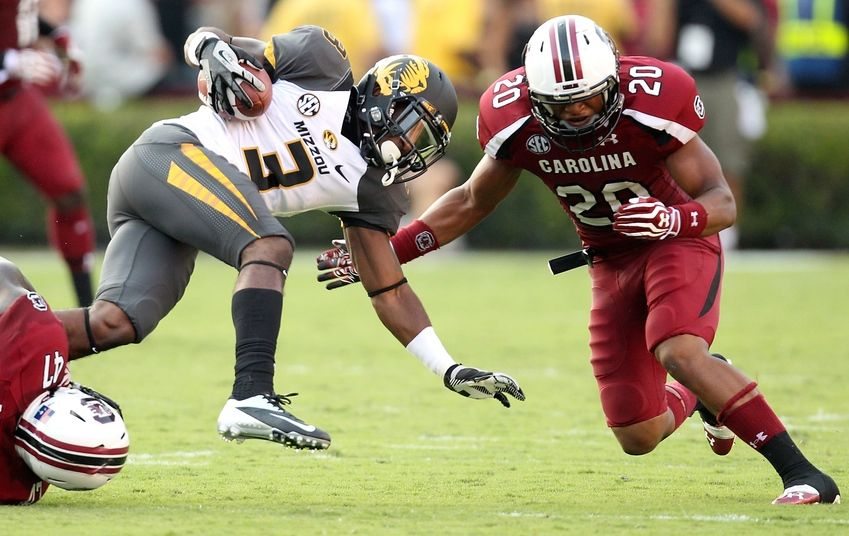 BREAKING DOWN THE “BATTLE OF THE COLUMBIAS”

By REECE FUNDERBURK  ||  The “Battle of the Columbias” returns to South Carolina this year for a key SEC East matchup – with ESPN’s College GameDay adding to the allure of this budding rivalry.

The Gamecocks won in miraculous fashion last year in Mizzou – a double overtime game in which they trailed 17-0 in the fourth quarter before mounting a memorable comeback.  Two years ago at Williams-Brice South Carolina rolled over Missouri 30-13 in the Tigers’ first-ever SEC road game.

This year the Gamecocks (3-1, 2-1 SEC) are coming off of an unimpressive road win over Vanderbilt, while the Tigers (3-1, 0-0 SEC) were defeated at home by Indiana.

To be prepared and know what to expect, here’s how the two teams grade out this week:

Fifth-year senior Dylan Thompson is currently ranked second in the SEC with 1,140 passing yards through four games while sophomore Maty Mauk of Missouri is not far behind with 978 yards through four as well.  Mauk has the lead in touchdowns, throwing for fourteen to Thompson’s eleven.  Right now Mauk is doing more with less – having lost his top three receivers from last year.

South Carolina was not especially effective running the ball last week against Vanderbilt.  Redshirt freshman David Williams looked good in limited action, though, and should receive even more touches this week as Brandon Wilds has been banged up.  Missouri brings in junior Russell Hansbrough – who is not a superstar tailback but a very capable starter in the SEC.  Missouri has depth as well with senior Marcus Murphy but for now, only one group is more battle tested.

A key position for both squads, expect both quarterbacks to come out firing.  South Carolina will look to continue its success last weekend with sophomore Pharoh Cooper – who looks like the most talented player on the team right now and has the hot hand. Missouri will be sending out Bud Sasser and Darius White who are tall targets at 6-foot-2 and 6-foot-3, respectively.  Sasser currently is the favorite target with over 350 receiving yards – and he’ll look to continue his success against a very generous Gamecock secondary.  Depth though is an issue for the Tigers, whereas the Gamecocks have a stable of talented wideouts.

South Carolina’s front five underperformed last weekend against a Vanderbilt defensive line with only one elite player.  While this group seems to show up each week depending on its opponent, the line is still a talented group with a few potential NFL players.  More consistent play is clearly needed, though.  Missouri will be switching things around this week – playing without starting left guard Anthony Gatti.  Right tackle Connor McGovern will be moving to right guard, which is where he started all fourteen games last season. Brad McNulty will replace Gatti at left guard while Taylor Chappell will play right tackle.  After the new changes and a not-so-stellar game against Indiana, this one is easy.

Missouri does not utilize the tight end position very much in its receiving game but sophomore Sean Culkin is capable of being an easy dump-off option.  He is in his first year as a starter, though.  South Carolina will utilize both Rory Anderson and Jerell Adams -however Anderson has emerged as the favorite target of the two.

Replacing the likes of Kony Ealy and Michael Sam has been hard for the Tigers – however the same can be said about South Carolina having to replace Jadeveon Clowney and Kelcy Quarles.  Both teams do not pride themselves on their defense, however Indiana ran through Missouri’s rush defense pretty easily – amassing over 250 yards.  South Carolina has yet to be burned by that much against a quality opponent.

Led by senior Braylon Webb, Missouri has talent and depth in its defensive backfield.  South Carolina on the other hand is still very weak but showed improvement last weekend with Brison Williams at safety.  Williams will move back to cornerback for the Missouri game, playing opposite Al Harris, Jr. (son of the former NFL great).  Chaz Elder and T.J. Gurley will start at the safety positions for South Carolina.

Missouri was gouged last week by Indiana – and the Hoosiers’ backup running backs – for much of the first half.  South Carolina didn’t look especially good against Vanderbilt, either,

This should be an exciting game – with Missouri opening its SEC slate and looking for payback from last year’s upset.  Gary Pinkel’s team is also no doubt still smarting from its embarrassing loss to Indiana.  South Carolina should come out highly motivated, too, after head coach Steve Spurrier read his players the riot act following their lackluster performance in Nashville.

The Gamecocks have more overall talent and depth, but their defense will be put to another test against another high-powered air raid attack – and if South Carolina doesn’t find some consistency on that side of the ball, they will be on upset alert.