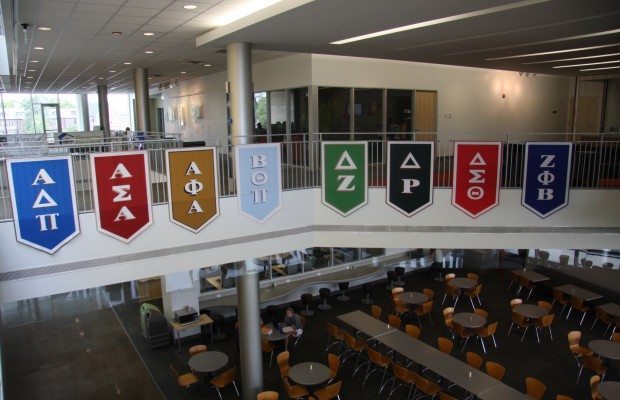 FRATERNIZING WITH THE ENEMY, Y’ALL

By MANDE WILKES || Being a libertarian means, essentially, despising authority in all its forms.  And I do. Truly, madly, deeply – I do.

That’s why I’m positively gobsmacked by a new edict handed down from the administrators of Wesleyan University, requiring all campus fraternities to admit women.  The rationale?  To alleviate the high incidence of rape and sexual assault occurring in frat houses.

Color me incredulous.  Already women are at risk simply by being on the premises – so how will it help when their exposure to these guys is increased?  That line of “reasoning” quite clearly strains both logic and convention.  Genuinely, I can’t imagine (nor do I wish to imagine) the meandering line of thinking that led to the administrators’ peculiar and ill-advised decision.

Of course, I probably shouldn’t be so stunned.  This news comes after all on the heels of a solid month of “concerned citizens” issuing proclamations about protecting women.  Specious at best, the prevailing idea right now seems to be that where women are at risk, we should encourage them to further entrench themselves in that environment.

There’s a convergence of bad advice, from head-patting women who stay in abusive partnerships, to assuring teens that they have every “right” to drunkenly prance around in dark alleyways, and now even to encouraging co-eds to join ranks with sexually violent frat guys.

How do we decrease the incidence of campus rape?  I don’t know exactly, to be honest about it.  But I thought it was a good start last month when a group of college students invented fingernail polish that changed color to alert a girl to the presence of drugs in her drink.  Naturally, though, that invention raised the eyebrows – and the ire – of those who wish to rob women of any notion of self-preservation.

The party line is that we shouldn’t expect women to bear any responsibility for their own safety, because rapists shouldn’t rape.  Or something. Sadly, that fosters a mentality of not only victimhood but also vulnerability.  The result?  A generation of girls who feel powerless, who can’t quit looking for the boogey man under the bed.

No, thanks.  I’d rather accept a modicum of responsibility, if that means I also get some power to protect myself.

“We don’t want someone doing X to Y, so let’s stock plenty of Y in the frat house and hope they don’t do X.”

They would probably end up calling them “house ho’s”.

“Hey! who’s red bag with the white hose is this?”

Liberal-Tarians want NO ONE to have any control. Liberals want Liberals ONLY to have control.

So we’re living in the Liberal, Liberal-Tarian Utopia you promised. How do you like it? Hold hands w/ AlGore, and go look in the mirror if you want to find the blame.

The display of wisdom in the Hallowed Halls of Academia is…

Will they require Sororities to admit men?

is that what the problem is? I’d be happy to wash mine in holy water.

Can you imagine living with 40 women for 4 years, then, I,M QUEER_I,M QUEER!

“Already women are at risk simply by being on the premises – so how will it help when their exposure to these guys is increased?”

Also, what will be said when some of those girls harass, seduce, or assault some of the guys? There are plenty of aggressive females out there.

I always map out the exits if there are “big girls” around.

I’m curious.. .is “tu” the word that one types when referring to the various spellings of … well, you know… two, to, too?

My dream of being a Hooters waiter is on the horizon!!!!

hooters women go on to new heights of glamour – teetering on the edge of exotic runways on stiletto heels in tissue thin gowns, on the brink of malnutrition and starvation…

yes, you too can turn your little girl into a fully developed woman who knows what she wants and how to get it.. start her out at the honey boo boo nasty ass academy for aspiring strippers.. we’ll show her how to wink, wiggle, crook her finger suggestively, spread her legs in every imaginable direction, waggle her butt, shake her tits, and make pouty lips look like every man’s landing strip! Yes, when we’re done with her, no *real* man will be able to resist her charms for long… and our gold plan includes a comprehensive course on palimony, common property states, and the subtleties of prenupts…

Don’t let your daughter get caught with her knickers down under the bleachers at her high school with nothing to show for it but a baby bump… turn her into a cash cow – literally… photo shoots, sex tapes, side boob, under boob, inter boob.. bouncy boob, jiggly boob… and with our most elite platinum plan, she gets plastic surgery to give that classic Kardashian/Lopez slut appeal.

We even have our own social media department to slowly leak nude pictures on the internet… guaranteed to make a splash on TMZ!

In addition to having a gourd growing out of her head, she’s an excellent proofreader.

No.. it’s a little bug with huge teeth that crawls up the neck of well-endowed white women in Southern climates.. its bite itches… and when she reaches up to scratch, it bites her hand, and won’t let go.. some women have gone for days with their hand held to the back of their head by a particularly tenacious fraternite.

The likely goal is not to integrate fraternities, but to eliminate them. Fraternity constitutions and bylaws specify that only males may join. Making them coed would likely force them to forfeit their national affiliations. For example:

http://www.mu-ato.com/wp-content/uploads/Theta-Omicron-Bylaws.pdf
02-101 Only males shall be eligible to pledgeship and membership in the Fraternity…

http://www.tke.org/files/file/black_book.pdf
THE DECLARATION OF PRINCIPLES
Finally, above all else, this fraternity stands for Men.

Inside the Colleges That Killed Frats for Good
http://www.newsweek.com/inside-colleges-killed-frats-good-231346
[Excerpt]
A crudely battered female mannequin dangled from a Middlebury College frat balcony in early May of 1988. Doused in blood-tinted paint and flashing a sexually charged slur, the gross spectacle appeared during a toga party at Delta Upsilon, the jock fraternity — and there it remained the following day, an ugly blight on the Vermont college’s idyllic campus, until a dean intervened. Students gawked but mostly carried on. It was the school’s small group of feminists who alerted the news crews up north in Burlington.

At Middlebury, the mannequin was an emblem of the unchecked influence six fraternities had exerted over campus life for generations — and it marked the beginning of the end. Later that month, Middlebury president Olin Robison declared it “a point beyond which our tolerance cannot and must not be stretched” and placed Delta Upsilon under suspension for a full year. By January of 1990, the Board of Trustees insisted that the frats integrate women, presumably forfeiting their national affiliations in the process, or dissolve. A year later, the school’s fraternities had been officially abolished, several of them swept up into a new decade’s system of coed “social houses.”

How Colleges Could Get Rid of Fraternities
http://www.theatlantic.com/education/archive/2014/03/how-colleges-could-get-rid-of-fraternities/284176/

This is a classic example of how Mande Wilkes FAILS at being a woman….!! (God, I hope her husband reads this…)

Mande has the insight to go off on this subject but yet she FAILS to see the logic or answer to the problem of sexual assault on campus…!!

We wonder if she has ever been on a surfboard in her life…? Does she ever stop to think how those surfers record the waves they ride…? Does she stop to consider how our troops record their war videos..?

Heck, this fine woman is missing a huge business and marketing bonanza. BRA CAMERAS…!! Heck if the police can use body cameras to record criminal takedowns then does Mande not think that BRA Cameras could not record sexual harassment..!?

Mande would actually be a great Spokes-model for such a product..!! We just wonder if she has the guts to offer kudos and compensation to me when she gets on SHARKTANK and makes a few million…!!!

(….a 5% stake would reward my efforts …..no need for a handshake….just a wink and smile)

“…Being a libertarian means, essentially, despising authority in all its forms…”

No Mande, that would make you an anarchist, not a libertarian.

+10 points and a pocket constitution……..

Your uniform should be mandatory for all users of this website……

“+10 points and a pocket constitution……..”
The Cato Institute mails them out regularly . . . along with their appeals for money.

Bravo SCBlues……….now you know where I get my “free” prizes….

…..dare to wonder what would happen if Mande pulled a AC/DC school uniform publicity “stunt” and posted an avatar with her wearing a school uniform with a “bow tie”…?

20 Point for the Nation of Islam bow Tie…. which has now become a staple power suit accessory.

…and, proves just how ignorant this ‘woman’ is.

Yeah.. like throwing paint at a wall is da da.

..and a stupid anarchist at that.

Fraternity rush and hazing is a form of male on male sexual harassment. Why not let women in?

The delectable Mande Wilkes is now quadrupling down on her hopelessly flawed opinions on women in abusive situations — but other than that, she makes a good point here. Yeah, that’s some wrong-headed shit they’re doing. Having more women in the military in close proximity to men has obviously not stopped rape from happening on an alarming scale. How in the hell do those jamokes at that school figure this is going to be any different?

a libertarian would never assert a person’s right to drunkenly prance… much less in the dark… or in the alley.. or all at once.

Is drunkenly prancing around in in dark alleyways a “thing” these days?

I swear … these kids today!

I believe she was referring to young women doing all that prancing in dark alleys. She left off the half-nekkid part that usually goes with such statments, I think, so as not to sound prudish. I be seein’ ’em prance around half nekkid in da club and da club’s parking lot, and at Waffle House, etc. in the o dark hunnert hours, an’ they parkin’ lot, too. Don’t know about the dark alleys, though, other than for photo shoots, where SOMEBODY should be packin’ that knows how to shoot somethin’ besides a photo.

I was a Fraternity at USC, pledged in mid-80’s and was very active in the organization. During my 5 years as an undergrad I was never aware of any of my fraternity brothers raping a coed, or anyone else for that matter. WTF has gone so wrong on college campuses these days that requires this nonsense?

Mandy Mandy-This is an invitation to join SAE at USC. You would be our first woman in our over 150 years of male bonding. We would make it so nice for you Mandy! Use your imagination. Rush Week-Pledging-Hell Week-Then Initiation. Commitment without rejection. Life time bonding. More pictures please.

a new edict handed down from the administrators of Wesleyan University, requiring all campus fraternities to admit women. … To alleviate the high incidence of rape and sexual assault occurring in frat houses.

Increase the supply, and you remove the glamour?