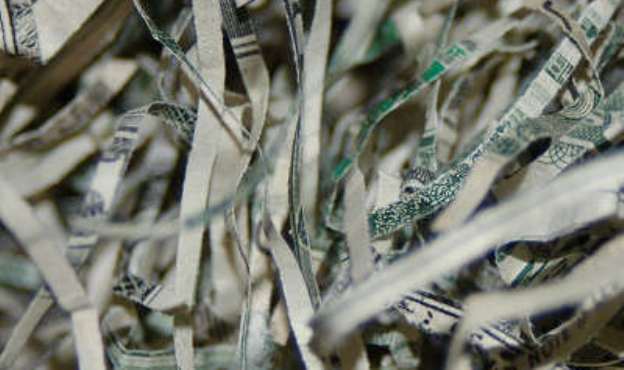 Accordingly the famous (and possibly apocryphal) quote often attributed to former U.S. Sen. Everett Dirksen – “a billion here, a billion there, and pretty soon we’re talking about real money” – no longer applies.  Now we’ve got to talk about tens or hundreds of billions to make an impact.

Like this report from the Associated Press citing overpayments of $97 billion last year – which the government says is the result of “clerical errors.”

Think about that for a second.  The federal government – your government – is so insanely big its “clerical errors” are now pushing the $100 billion mark.  Oh, and that astronomical figure is likely a low-ball estimate.

“The federal government is unable to determine the full extent to which improper payments occur and reasonably assure that appropriate actions are taken to reduce them,” a bureaucrat at the Government Accountability Office (GAO) told lawmakers this week.

A walk-on character in an old Judge Dredd comic (I prefer my fascism in paper format) was called a biller. She just sent out bills for nothing specific–making it legal–to the accounts-payable office at hundreds of organizations per week and some paid her.

https://www.paymentaccuracy.gov/
“Improper payments” occur when:
– funds go to the wrong recipient;
– the right recipient receives the incorrect amount of funds (including overpayments and underpayments);
– documentation is not available to support a payment; or
– the recipient uses funds in an improper manner.

FITS you’re Screaming after the horse got out the barn. But you were in lockstep w/ the liberals, and endlessly bashed Romney and Bush.

I’m sorry, but it is Disgusting to see you whiningg about this, when you are part of the problem.

Want to see what you can do to help: Read: http://scdigest.blogspot.com/ …National Democrats have already Impeached themselves

Will needs to start charging you for advertising your blog. If it weren’t for this site nobody would know it even existed.

Just because it is advertised here doesn’t mean people from here go there. Sometimes a cigar is just a cigar.

According to the AP article, nearly 2/3 of that $97 million in overpayments went to that market-based healthcare system loved by so many Obamacare haters.

Ya got me dead to rights, Colonel. As soon as I posted, I thought “Oh, wait.”

Oh, it gets better, just like that new health insurance startup in Charleston, Obamacare has spawned a new flood of “market-based healthcare” that’s funded by crony operators that don’t have any idea what competing in a “free” market is…their whole business model is collecting checks from the gubmint for subsidized members.

The good news is the balance sheet of the US isn’t going to tolerate this more than a decade(if we are lucky).

I am glad someone has sense. We should get rid of Medicare immediately. Seniors can buy their own health insurance if we get rid of Medicare. If Ryan runs for President and the Reps, can take the Senate maybe we have a shot at killing Social Security and Medicare for good.

I used to have to prepare financial statements for the gubamint under something called the”Chief Financial Officer’s Act”. Basically I had to swear that the numbers we were reporting were accurate and prepared using GAAP.

One wonders what accounting principles the “gubamint” uses and who is one the blame line when they get it wrong. Yes, that’s rhetorical – no one is on the blame line.

The inherent beauty of bureacracy….no one to blame.

What is the back story? What are the rules mandated by Congress in regard to Medicare payments to providers? I am asking as I have been lead to believe that there is a time limit on how much time can pass before the provider has to be paid irregardless of whether the legitimacy of their claim has been investigated. If 66% of the $97B is due to this, then that is the first place to start reform. Reform won’t happen as those providers are the ones who leaned on their representative to get such rules put in place. I recall 60 Minutes covering this situation before in regard to providers of medical equipment.

Well written. Well researched. And oh so true. If not for Auto-Sequestration, that compromise resulting from the Super Committee of two, there would be no spending cuts applied to our insane federal budget.

A hundred million dollars, Mr. President, is only a “drop
in the bucket.” I grew up at a time when on Sunday, if I had
been a good boy for the whole week, my mother gave me a penny
and said to me, “My son, don’t spend it all in one place.”

We have come a long way from then. The classic example is here
tonight, when the Senator from Colorado says a hundred million
dollars is “a drop in the bucket.”

No wonder we are nursing a $295 billion debt.