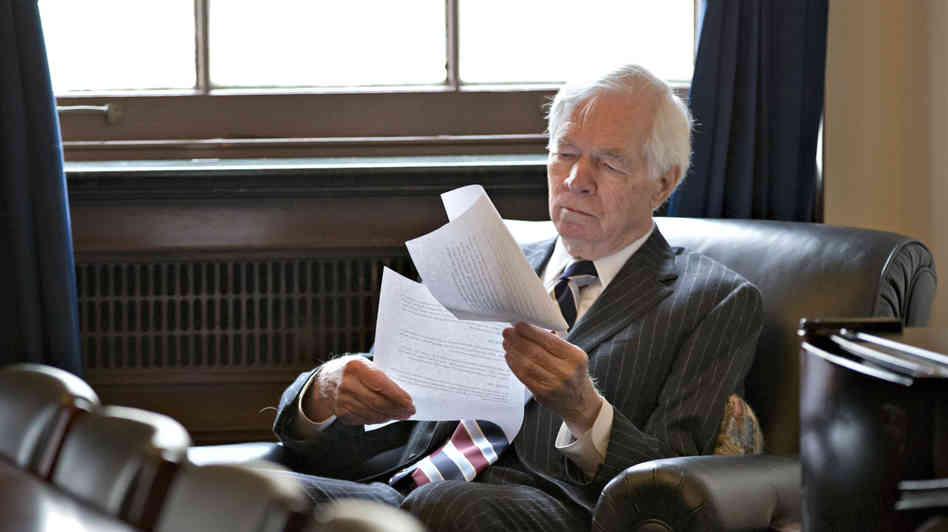 With 100 percent of precincts reporting, Cochran received 50.8 percent of the vote compared to 49.2 percent for fiscally conservative challenger Chris McDaniel, a State Senator who appeared poised to defeat the six-term incumbent.

How did Cochran eke out such a narrow victory? He took a page out of the Democratic playbook, and turned out the black vote …

“Runoff turnout in the 24 counties with a black population of 50 percent or more was up almost 40 percent from the primary,” pro-establishment reporter Chris Cillizza of The Washington Post  notes. “In all other counties, turnout was up just 16 percent.”

That’s an amazing statistic … especially when you consider Democrats would have been more likely to pick up this Senate seat in the event McDaniel had defeated Cochran, as most pundits were projecting.

So … how was Cochran’s campaign able to pull off such a feat?

Easy: By using special interest money to disseminate racist, fear-mongering, dependency-perpetuating radio ads like this one …

“By not voting, you’re saying take away all of my government programs – such as food stamps, early breakfast and lunch programs, millions of dollars to our black universities,” the ad’s female, African-American narrator states. “Everything we and our families depend on that comes from Washington will be cut.”

“Mississippi will never be the same,” she adds.

Last time we checked Mississippi – much like South Carolina – will always be the same.

In fact this is precisely the sort of shameful ad used in the Palmetto State last November … by Democrats.

Welcome to the new “Republican” party people … in which good ol’ boy politicians win tight primary elections by telling black voters the Tea Party is going to take away their food stamps.

“This is your victory,” Cochran told his supporters after he was declared the winner.

Sing it with us, people …

Mississippi took a page out the Harpo’s playbook – they rented the vote for the day. Jean Toal did the same in February when she did the same with the Black Caucus by and through Bobby Harrell….. Beattie’s angry black man routine yesterday was not impressive, btw. Hearne was trying to hide her smug smile. Kittridge tried to act intelligent and with it, but he’s neither.

“By not voting, you’re saying take away all of my government programs – such as food stamps, early breakfast and lunch programs, millions of dollars to our black universities,” the ad’s female, African-American narrator states. “Everything we and our families depend on that comes from Washington will be cut.”

Pure honesty right there. Embrace it. Don’t shy away from it.

They are DC’s Negro’s, pure & simple. They don’t aspire towards leaving the plantation, they just want to be the house Negros instead of the field workers.

So you’re response is don’t let them out of the field?

Clearly you have a problem with reading comprehension, so it’s not worth responding to you.

And yet you did…

Good point, I should have instead said “I’m not responding to your comment” instead.

When someone adds extra words to a conversation that weren’t said to distort, I just want to immediately get away from them.

If Republicans don’t offer anything better, then African-Americans will continue to vote liberal-Democrat.

tea party set themselves up by talking nonsense, like food stamps is the deficit driver. if they spoke honestly about corporate welfare and tax cut handouts and got rid of the silly racist anti-obama crap, cochran wouldn’t have had this ammo.

by the way speaking of racist crap – welfare moms really ran out to vote in the GOP runoff? do you really believe that?

And of course his reaction is “Boo hoo, this isn’t the party of Reagan anymore!”

Abortion and the Conscience of the Nation | Heartland Institute

heartland.org/policy-documents/abortion-and-conscience-nation – Similar to Abortion and the Conscience of the Nation | Heartland Institute

A Democrat would be more likely to win against McDaniel? In a staunch red state? Who are you shitting? Even if there was a remote possibility, should they risk a win on losing and getting a far more extreme right winger put in?

A Democrat may win now. Maybe the Conservatives will give Thad a dose of his own medicine!

It’s politics at its finest. It is all about winning!! The END justifies the MEANS. Tea Party got out “tea partied”.

You are far more bigoted than any ad Thad ran.

The Mississippi primary is a FITS dream. Like Va. it was democrats, and Liberal-Tarians voting against the Conservative, that put the moderate in.

It likely happened in the SC Ed Super’s race too.

I hope the GOP Prosecutors go after the illegally voting democrats, and Liberal-Tarians this time. And take this “win” from the moderate.

What “illegally voting democrats”? Anyone who had not previously voted in the regular Democratic primary could (and did, apparently) vote in the Republican runoff.

Also, too: how did that attempt to intimidate voters with Ken Cuccinelli’s “poll watchers” work out?

SC democrats likely voted for Spearman in the June 10 Primary. Her being ED of the Big Ed Administrators likely had the democrats foaming at the mouth to support Spearman.

Just like some probably voted for Graham…because it’s your only chance to be relevant in a state that has figured out who, and what you are…

I can’t believe I am saying this but GT is right on this one. I am generally a Dem but vote in the Republican primary for the most moderate Republican. It is perfectly legal under our laws and helps to keep the really scary Republicans off the general election ballot. Anyone who saw Ms Atwater’s interviews has to acknowledge that she is either clueless or is hiding her true views from the voters. While I disagree with about 75% of what Lindsay stands for, at least he is one Republican who is willing to compromise and put the interests of the country ahead of the interests of the Republican party.

“While I disagree with about 75% of what Lindsay stands for, at least he is one Republican who is willing to compromise”

Yes….compromise is going swimmingly so far.

Well at least the government isn’t still shut down as it was last October and we haven’t defaulted on our national deblt.

Yes, shutting down the gov’t would be a travesty. Even worse, defaulting would be much worse than printing up the balance of the unfunded liabilities. on an ongoing basis. You got me there.

Will defends the neo-confederate, there is a shocker

In all sincerity, I agree that Cochran’s strategy was a dirty trick. I’d be pissed if I were McDaniel. It shows the win at all costs mentality of the Republican establishment.

It might be interesting to evaluate the SC Superintendent of Education race to see if a similar effort was made to support Spearman. Not so much from Blacks as from Democrats.

How do you define who is a Republican, who is a Democrat, and who is an independent, who votes for the person and not the party?

By the letter next to the name silly!

Do you have a letter beside your name? Where is that? On your drivers license? How about your voter ID card?

I have two letters next to my name:

What about the Tea Partiers and Libertarians who say they are not Republicans. Shouldn’t we evaluate them. Why are they voting in the Republican Primary. Are they voting just to influence a the candidate of party they do they do not belong to?

And the RINOS. What about them? Why are we letting RINOs vote in the Republican Primary

If Spearman is anti-choice, I would look for odd changes turnout between primary and runoff totals for counties.

Not all Independents and Republicans are in favor of private school vouchers.

No but it is the number one issue in the election.

So what is your point?. You do a study and find out that if vouchers are on the table more voters, Republican, Independent, and Democrat who are opposed to private school vouchers will turn out. Exactly what would that tell you?

why no mention of the SCSC AG vs. Harrell hearing yesterday? Preparing a big story or backing off?

I was wondering about that too.

Excuse me, but I seems that a have heard much talk among the Republican faithful, that “we must broaden our base…we must become the party of the Big Tent… we need to appeal to all segments of society ,etc., etc.”. Well, in Mississippi, it seem you got what you wished for. How do you like them apples?

Real simple, lets get more republicans in there. For what ?
Why ? Please tell me ?

You know, in the movie “Red Dawn”, a group of Americans were lined up by the Soviets, and they started singing “America the Beautiful” like FITS did above. When they hit the refrain, the lot were gunned down en masse. I wonder if FITS sees a similar ending for the conservative movement……

Another example of the need for term limits. 12 years total in the House and/or Senate and you’re out.