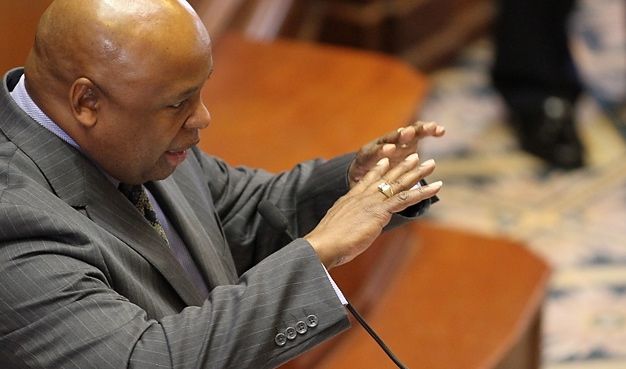 SENATOR HOPING TO RUN OUT THE CLOCK ON NEEDED REFORM …

As we noted in our story, a patent troll is a company whose sole purpose is targeting businesses with aggressive litigation over … well, patents. Do the patent trolls actually produce anything? Like a product or a service? Of course not. They’re what are referred to in the business as NPE’s – or “non-practicing entities.” They don’t make anything – nor do they have any intention of ever making anything. They exist to extort money from target defendants – threatening them with costly lawsuits (often without evidence of infringement).

Finlay’s bill blocking such companies is a no-brainer. We support it – and it easily cleared the S.C.  House and was on the way to breezing through the State Senate. Unfortunately, it has been blocked there by S.C. Sen. Gerald Malloy (D-Lee) – a trial lawyer with a history of self-serving obstructionism.

Malloy has placed a “minority report” on the legislation and is refusing to permit it to move forward – effectively killing the bill for the session.

What is Malloy’s beef with the legislation? It’s not clear … although we have no doubt there’s something in it for him.

We’re not going to bash Malloy’s procedural move … the rules are what they are, and he’s perfectly within his right to do what he’s doing. We certainly wouldn’t bash a pro-free market State Senator for using the same methods to block a tax hike or other bad legislation.

We simply want people to know who’s responsible for doing what at the S.C. State House … and let them make heads or tails of it.

“…Malloy has placed a “minority report” on the legislation and is refusing to permit it to move forward…
Someone please explain how this works – Malloy gets to hold up legislation because he’s a minority?!? Wait, what, he gets to hold it up because he’s in the minority party, oh, okay. Wait – don’t elections have consequences?

Is there a rule as to when a minority report should/must be submitted with respect to a special committee report? Is there a time after which (if no prior permission was given) that the report should not be considered? Can the minority report contain or reference information not considered by the committee as a whole? Thank you for taking the time to consider these questions.

A minority report is a privilege an assembly may allow, but it is not a right of the dissenting members to present it. In debate on the majority report, any member may express freely whatever dissenting views they may hold.

I hope this information is useful to you. Robert’s Rules of Order Newly Revised discusses minority report details on pp. 519-521.

So if I understand, he can “submit a report” but that has no real power unless acted upon by the body?

In today’s America if the PTB believed that elections had consequences…we wouldn’t have them anymore.

My goodness that’s a long pinky nail, wonder what that’s used for?

Certainly nothing to sniff at.. then again..

This just BEGS for a T-Rav op-ed to ‘splain it to us.
Aren’t we overdue for one, anyway?

Well that clears it right up. Whew.

Just another angry democrat, with a pinky nail long enough to eat cereal off of.

You’re clearly a racist for opposing what Mr. Malloy is suggesting.

Here’s guessing the Republican backed bill affects a whole lot more than just patent trolling lawsuits. Their party platform would gladly end the right of individuals to a jury trial in a civil case. Thanks, Gerald. We need you on that wall!

Thanks, I tried to find a link to the bill on this website but none was available. I’ve read it, and it is objectionable because it requires a judge to determine facts, which is not his job in anything other than a bench trial. In a jury trial the judge determines the law, and the jury decides the facts relative to the law.
So I was right: SCAJ is against it because it has a chilling effect on individuals (and don’t think for a minute that corporate America is daunted by a potential $250K bond requirement) trying to protect their intellectual property rights. It is exceedingly more likely that a mom and pop inventor is going to get run over by big business than the other way around. And you can count on EVERY patent infringement demand letter will be characterized by the recipient as being in bad faith hence subject to the Act and penalties, including punitive damages! Since when are Republicans in favor of punitive damages?
Anyone have any figures on patent trolling lawsuits in SC? Or is this just another ALEC solution in search of a problem?

Kirkman Finlay seems like one of the few uncorrupted, incorruptible individuals in the political arena. I really wish he had won the election to be mayor of Columbia. What a great legacy that would have been, plus he actually cares about Columbia and wouldn’t be using his post as a wealth builder for himself.

Trial Lawyer Asso. is against this bill, as it is money in their pockets: Billions.
This guy is just another Lawyer Scum Bag, trying to enrich himself at the expense of society.

Isn’t that the Illuminati symbol he’s making with his hands?

FITS this is not a “no brainer” the law is tough to write correctly because it unitentionnally can make the standard for prevailing in courts for legitimate patent holders trying to enforce their intellectual property rights MUCH higher than it should be an unintentionally provide prtections to those who violate patents. Malloy is right

Malloy is a complete, total asshole, looking out for himself and his lawyer friends. If his constituents weren’t uneducated morons, he’d have been out of there years ago.