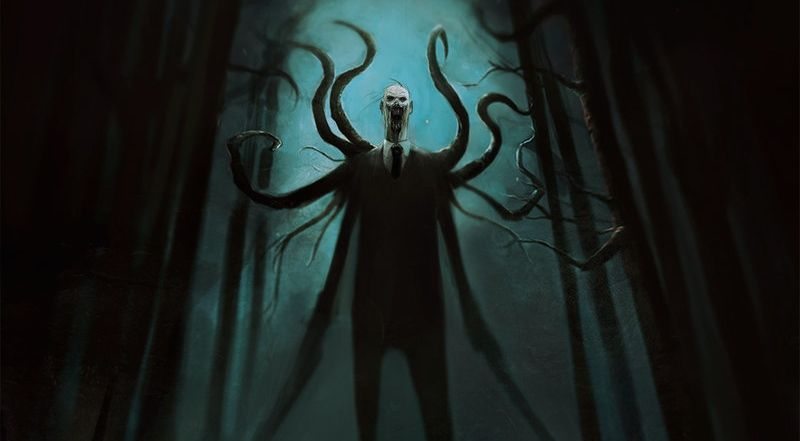 By now you’ve probably heard the grisly news coming out of Waukesha – a suburb of Milwuakee, Wisconsin.

The unidentified victim, also 12 years old, managed to crawl out of the woods to a sidewalk where a passing bicyclist found her. She suffered nineteen stab wounds to her arms, legs and torso – including one which doctors say missed a major artery by a single millimeter.

The victim is in stable condition at a Milwaukee area hospital … while the two assailants are being held as adults on $500,000 bond. Both been charged with attempted murder, and are facing up to sixty-five years in prison.

So … the obvious question: What in the hell made a pair of suburban pre-teens commit such a calculated and cold-blooded act?

The answer is Slenderman (above), a fictional demon-like character they discovered on a website called Creepypasta Wiki.

According to the girls, Slenderman lives in a mansion in the Nicolet National Forest in Wisconsin – which is where they were headed when police apprehended them following the stabbing.

From The Milwaukee Journal-Sentinel …

Weier told police that Slender Man is the “leader” of Creepypasta, and in the hierarchy of that world, one must kill to show dedication. Weier said that Geyser told her they should become “proxies” of Slender Man — a paranormal figure known for his ability to create tendrils from his fingers and back — and kill their friend to prove themselves worthy of him. Weier said she was surprised by Geyser’s suggestion, but also excited to prove skeptics wrong and show that Slender Man really did exist …

… Weier said Geyser then tackled the victim and started stabbing her. The victim was screaming. Weier said when Geyser got off the victim, the victim screamed, “I hate you. I trusted you.”

Today’s object lesson? It pays to keep a very close eye on your kids … and an even closer eye on what they are looking at on the internet. Especially if it’s content that encourages violent, ritualistic behavior.

We’re not saying these girls should have still been sitting around playing with dolls, but it’s an incredibly scary prospect for our society that they were instead spending weeks planning out a sadistic killing.

GM: The Price Of Failure