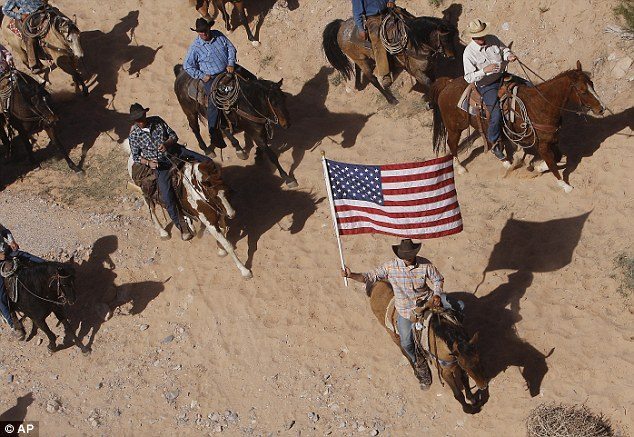 By Ron Paul || The nation’s attention has for the past few weeks been riveted by a standoff in Nevada between armed federal agents and the Bundys, a ranching family who believe the federal government is exceeding its authority by accessing “fees” against ranchers who graze cattle on government lands. Outrage over the government’s use of armed agents to forcibly remove the Bundys’ cattle led many Americans to travel to Nevada to engage in non-violent civil disobedience in support of the family.

The protests seem to have worked, at least for now, as the government appears to have backed off from direct confrontation. Sadly, some elected officials have inflamed the situation by labeling the Bundys and their supporters “domestic terrorists,” thus justifying any future use of force by the government. That means there is always the possibility of another deadly Waco-style raid on the Bundys or a similar group in the future.

In a state like Nevada, where 84 percent of the land is owned by the federal government, these types of conflicts are inevitable. Government ownership of land means that land is in theory owned by everyone, but in practice owned by no one. Thus, those who use the land lack the incentives to preserve it for the long term. As a result, land-use rules are set by politicians and bureaucrats. Oftentimes, the so-called “public” land is used in ways that benefit politically-powerful special interests.

Politicians and bureaucrats can, and will, arbitrarily change the rules governing the land. In the 19th currently, some Americans moved to Nevada because the government promised them that they, and their descendants, would always be able to use the federally-owned land. The Nevada ranchers believed they had an implied contract with the government allowing them to use the land for grazing. When government bureaucrats decided they needed to restrict grazing to protect the desert tortoise, they used force to drive most ranchers away.

By contrast, if the Nevada land in question was privately owned, the dispute over whether to allow the ranchers to continue to use the land would have likely been resolved without sending in federal armed agents to remove the Bundys’ cattle from the land. This is one more reason why the federal government should rid itself of all federal land holdings. Selling federal lands would also help reduce the federal deficit.

It is unlikely that Congress will divest the federal government’s land holdings, as most in government are more interested in increasing government power then in protecting and restoring private property rights.

A government that continually violates our rights of property and contract can fairly be descried as authoritarian. Of course, the politicians and bureaucrats take offense at this term, but how else do you describe a government that forbids Americans from grazing cattle on land they have used for over a century, from buying health insurance that does not met Obamacare’s standards, from trading with Cuba, or even from drinking raw milk! That so many in Washington D.C. support the NSA spying and the TSA assaults on our privacy shows the low regard that too many in government have for our rights.

History shows us that authoritarian systems, whether fascist, communist, or Keynesian, will inevitably fail. I believe incidents such as that in Nevada show we may be witnessing the failure of the American authoritarian warfare-welfare state — and that of course would be good. This is why it so important that those of us who understand the freedom philosophy spread the truth about how statism caused our problems and why liberty is the only solution.