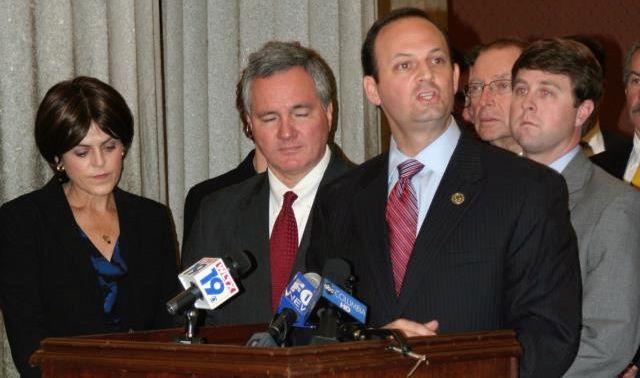 S.C. Attorney General Alan Wilson is under fire for failing to report as many as fifteen contributions to his inaugural ball in 2011.

According to The (Columbia, S.C.) Free Times, Wilson “will have to amend some two-year-old campaign finance reports because at least a dozen contributions he should have disclosed were never reported.”

Wilson’s contribution problem came to light after he returned $7,000 in contributions tied to embattled S.C. Speaker of the House Bobby Harrell (RINO-Charleston) – including a $3,500 check from Harrell’s campaign to Wilson’s inaugural party.

Last week Wilson referred an ethics case involving Harrell to the S.C. State Law Enforcement Division (SLED) to determine if any criminal wrongdoing took place on a broad range of charges – including several campaign finance-related allegations. Meanwhile a year ago his office helped take down S.C. Lt. Gov. Ken Ard (RINO-Florence) for his role in a campaign finance scheme which was originally exposed by this website.

Naturally, then, any campaign finance-related problems in Wilson’s own back yard are cause for serious concern.

This website was no friend to Wilson during his 2010 campaign. In fact he was probably our last choice for the Attorney General’s office. However it’s hard to argue with his performance so far. He’s run his office like a Boy Scout, and based on what we’ve seen we take him at his word when he says these omissions were honest mistakes. Also, it’s worth noting the only reason we know about these problem at all is the fact Wilson stepped forward on the Harrell donations.

We’re not saying Wilson should avoid accountability for his errors. However this issue is resolved, he likely has some well-deserved ethics fines coming his way, and his campaign clearly needs to get a better handle on its finances moving forward.

More importantly, South Carolina needs to do away with inaugural balls and committees altogether. These events are nothing but breeding grounds for corruption and favor-trading. In fact we’d urge lawmakers to incorporate their elimination into this year’s various ethics reform proposals – although we suspect that’s about as likely to happen as meaningful ethics reform.