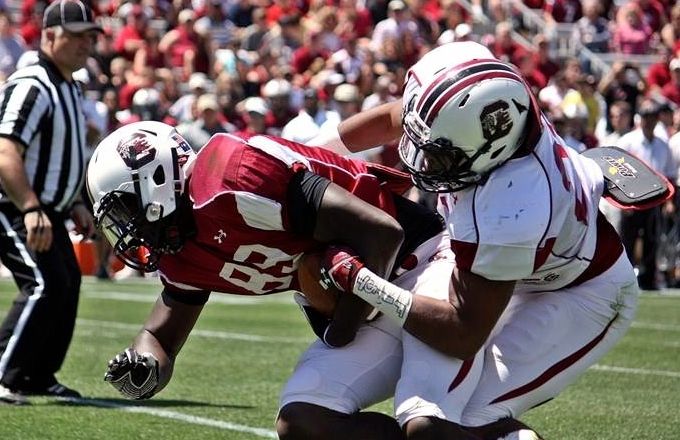 COLUMBIA, S.C. (April 7, 2014) — The University of South Carolina football team will wrap up its spring drills on Saturday, April 12, with the annual Garnet & Black Spring Game. Admission is free for the noon contest at Williams-Brice Stadium. The game will be broadcast on ESPNU with Joe Davis providing the play-by-play, Matt Stinchcomb handling the color commentary and Maria Taylor working the sidelines.

The spring game is scheduled for four 12-minute quarters. The clock will stop during the first half and will run continuously in the second half. The annual football spring awards will be presented by Head Coach Steve Spurrier at halftime. The South Carolina women’s basketball team, which posted a school record for wins and earned the SEC regular season title, and the back-to-back SEC champion equestrian squad will also be recognized during the intermission. Fans can use the hashtag #Gamecocks on their Twitter and Instagram posts for a chance to see their tweets and photos on the video board during the game.

The Gamecock Club will be hosting its annual FanFest before and after the game. FanFest activities will begin at 9:00 a.m. and will be located in the northwest corner of Williams-Brice Stadium at the intersection of George Rogers Blvd. and Bluff Road.

The FanFest will include a corn hole and a tailgate competition for pre-registered contestants, and other fun activities for the entire family. The 2014 football schedule posters will also be available. Fans are allowed up to five posters per person while supplies last. Lettermen will once again be selling the official spring game program for $5. There will also be an on-site presence from the SEC Network.

Fifteen minutes following the game, Gamecock fans will have the opportunity to come on the field at Williams-Brice Stadium and have their picture taken with Cocky in front of the videoboard. The finals of the corn hole competition will be held in the stadium’s north end zone. The winners of the tailgate competition will receive four field passes to experience “2001” prior to the Texas A&M game, while the winning team for the corn hole tournament will receive a helmet autographed by Head Coach Steve Spurrier. Players and coaches will not be available for autographs following the game.

Parking for the Garnet & Black Spring Game will be available on a first-come, first-serve basis. ETV lots ($10) and the athletics department’s Key Road parking lot (free) will open at 8 a.m. Gate 10 at the Fairgrounds will open at 9 a.m. with spots available for $10. Gamecock Park will not be available for parking due to construction in the area.

The Williams-Brice Stadium gates will open at 10:30 a.m.

Related Topics:ESPNUuniversity of south carolinaUniversity of South Carolina Spring Game
Up Next

Hank Aaron: Still The One