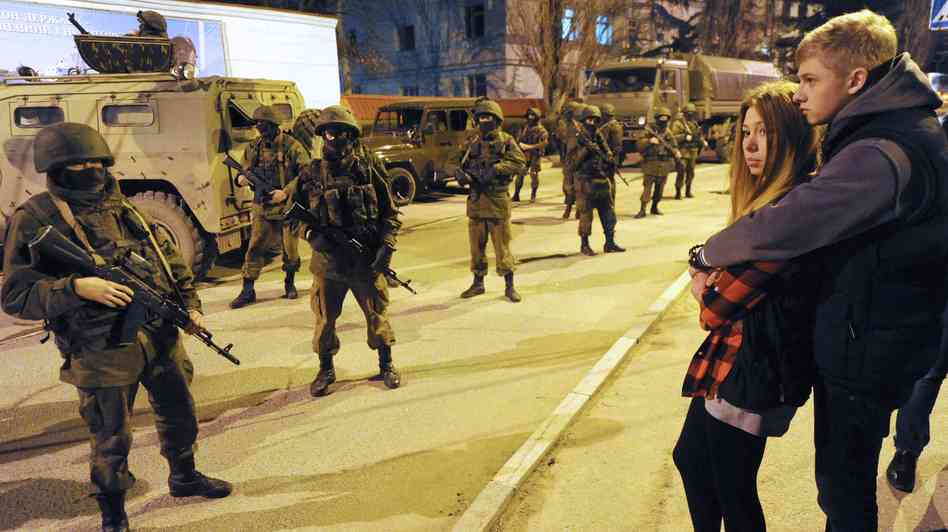 WHAT THE BEAR WANTS … THE BEAR TAKES

The parliament’s deputy said the move was a response to “constant threats from the current illegal Ukrainian authorities.”

The move is the latest escalation in the Ukraine crisis – which began a week ago when Russian forces invaded the Crimean peninsula, an autonomous Republic located on a peninsula of Ukraine on the Black Sea.

Crimea has a Russian ethnic majority. So does Eastern Ukraine, which may be next on the list of territories to fall under Russian control.

The Crimean parliament’s decision was swiftly rebuked by Ukrainian Prime Minister Arseniy Yatsenyuk – who claimed it was “illegal.”

Yatsenyuk also pleaded with Russian President Vladimir Putin “not to support those who advocate separatism.”

Yeah … good luck with that …

Western powers have limited options at their disposal for dealing with this latest round of Russian aggression – which is, frankly, as it should be.

So far, U.S. President Barack Obama has vowed to impose sanctions on those “responsible for activities undermining democratic processes or institutions in Ukraine,” but it’s not immediately clear what sort of sanctions he’s referring to – or whether they will have any impact on the crisis.

Real economic sanctions against Russia are unlikely because Germany – the industrial heart of the European Union – depends on Russian natural gas to power its factories.

“Maybe the American people or the government or whoever raises their eyebrows can say how could the Europeans be so moderate on the debate over sanctions,” Siemens President and Chief Executive Joe Kaeser. “Guess what? You don’t want to sanction anyone you depend on.”

That makes all the tough talk coming from U.S. Secretary of State John Kerry a bit difficult to take seriously – and explains why Obama is becoming increasingly isolated internationally in his calls for economic reprisals.

“With each passing day, Putin consolidates his new territory even as the west dithers, Europe is unable to obtain the bailout loans it has promised Ukraine, and Kerry keeps talking,” the website Zero Hedge noted.

“You Cannot Negotiate With Iran?”

With the cold war being over and all, I though that rest button was going to solve everything.

Too bad we dont have McCain or the Mittster in there!They would show them damn Russkies.Bring Back Dick Cheney!(but not George W,he looked into Putins soul” remember?)

Obamas mistake is listening to the foreign policy establishment in this country and running his mouth.

Truth is we have no dog in this fight ,but, as usual for America,we try to interfere all over the world.

Bring Kerry home.Tell the Europeans its their show..And move on to address our problems here at home.

I think Obama is weak and a terrible president, but the Chamberlin tag is a bit silly.

Some historical and geographical background on why Ukraine is a big deal for Russia.

Check out the gas pipeline map.

Well it looks as though Ukraine is in the driver’s seat here. If they want to argue over Crimea all they have to do is say to Russia, pull out or we will blow up the pipelines.

Excellent read and I love the last line of the comments:
“”Treason doth never prosper: what’s the reason? For if it prosper, none dare call it treason.”

What we need to do is listen to Senator Graham, and get involved in stopping this attack on a close friend. Senator Graham is a man above all others whose unique and varied experience in foreign policy and military strategy has been crafted by years of front-line experience serving our country as a military hero and a great statesman and Senator.

Yes sir!
It is amazing the military acumen he attained writing “dependent’ checks from his “forward observer” battle station at Shaw Air Force base.

That says it all!

It’s chess. We should take Cuba.

Obama, and the West should just mind their own business. We have no business with Russia and their dealings with Ukraine. If Crimea wants to go their way, let them decide so in a democratic process. Let the people inhabiting those lands make their own determination on which country they wish to belong to. Enough meddling in foreign affairs.

When we choose to throw accusations at Putin lets not also forget we still occupy (illegally so) a part of Cuba. And our close ally the Brits literally snatched the Falklands from under the Argentinian’s nose. The West is by no means this “pure and clean” force in the world. Everybody goes after their own interests. I think every major country has lost the right to accuse another country of trumping some international law. It seems that the only ‘democracy’ we in USA accept is that which follows our line of interests.

We pay for Gitmo:
“In 1934 the Avery Porko Treaty reaffirming the lease granted Cuba and its trading partners free access through the bay, modified the lease payment from $2,000 in U.S. gold coins per year to the 1934 equivalent value of $4,085 in U.S. dollars, and made the lease permanent unless both governments agreed to break it or until the U.S. abandoned the base property.

After the Cuban Revolution, President Dwight Eisenhower insisted the status of the base remained unchanged, despite Fidel Castro’s objections. Since then, the Cuban government has cashed only one of the rent checks from the U.S. government, and even then only because of “confusion” in the early days of the leftist revolution, according to Castro. The remaining un-cashed checks made out to “Treasurer General of the Republic” (a title that ceased to exist after the revolution) are kept in Castro’s office stuffed into a desk drawer. The United States argues that the cashing of the single cheque signifies Havana’s ratification of the lease — and that ratification by the new government renders moot any questions about violations of sovereignty and illegal military occupation.. ” Wikipedia

To bad W is not still President. We would have bombed the hell out of Belarus by now.