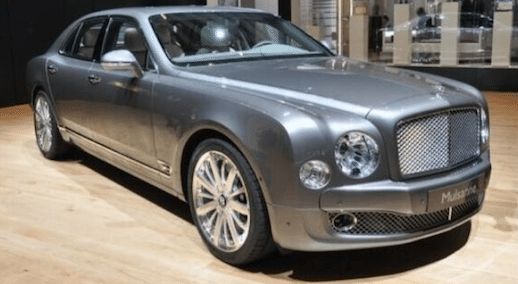 Former University of South Carolina All-American defensive end Jadeveon Clowney sparked a social media furor this week when he posted – and then quickly removed – a picture of a brand new $300,000 car which he referred to as his “new baby.”

Clowney posted the picture of the new Bentley Mulsanne – which lists for $301,625 – on his Instagram page at around 2:30 p.m. on Saturday.

So did Clowney actually buy this car?  It’s not immediately clear – and calls to his reps were not immediately returned.  All we know is that by 3:00 p.m., the picture of the shiny Silver Mulsanne had been removed from Clowney’s social media pages.

By that time, though, at least 250 people had “liked” it and several others had posted comments on it.  Oh, and Clowney’s “baby” had been screen-capped and preserved for posterity … 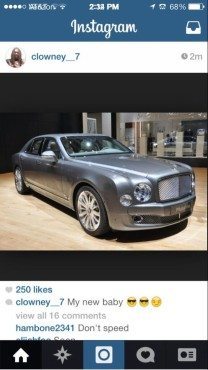 Obviously this isn’t the first time Clowney – who is projected to be a top five pick in the 2014 NFL draft – has made automotive headlines.  Last month he was busted not once but twice traveling at excessive speeds on South Carolina interstates.  Clowney has requested a jury trial in at least one of these cases, and has retained the services of U.S. Attorney Pete Strom – South Carolina’s top attorney.

British-made Bentley Mulsannes are assembled by hand at the company’s facility in Crewe, England – with each car taking around three months to produce.  To take a look at one yourself, visit the car’s official website here.

While Clowney has yet to be drafted – or sign an NFL contract – he has access to insurance money and his agent, Bus Cook, could have co-signed for a car.

Last year’s No. 1 NFL draft pick – Eric Fisher of the Kansas City Chiefs – signed a four-year deal worth $22 million. Of that total, $14.5 million was paid to him in the form of a signing bonus.

Instant wealth comes with its pitfalls, though.  According to a 2009 investigative report by Sports Illustrated, nearly 80 percent of NFL players are either bankrupt of facing severe financial strains within two years of their retirement.  The same report also found that 60 percent of NBA players were flat broke within five years of leaving the game.

Clowney – a 6-foot-6, 274-pound freak of nature who runs a 4.46 forty-yard dash – finished his USC career with 24 sacks and 47 tackles for losses, none more seismic than the legendary boom he lowered on Michigan running back Vincent Smith during the 2013 Outback Bowl. And while his 2013 season may have been a disappointment statistically, Clowney was routinely double-teamed by opposing defenses and his presence on the field limited opponents’ game plans.

UPDATE: Clowney and his attorney, Pete Strom, have confirmed to FITS the car belongs to a friend and that Clowney was “just cutting up.”