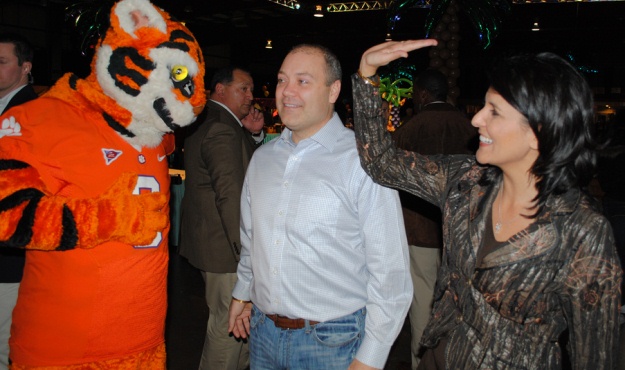 S.C. Gov. Nikki Haley welcomed her husband Michael back from a one-year deployment to Afghanistan this week.

What was the Palmetto State’s “first gentleman” doing over there? Officially, he was a liaison for an agricultural unit that’s been tasked with teaching Afghan farmers how to irrigate their crops.

You read that right: Your tax dollars are paying for politicians’ spouses to oversee farm subsidies in foreign countries.

Frankly, that’s almost as ridiculous as Haley’s stateside position – that of a “diversity officer” with the National Guard. But that hasn’t stopped Haley from touting her husband as a hero who is “fighting for our freedoms.”

Nor has it stopped Haley from cheesing out …

“It has been a great tour, but long 11 months in Afghanistan, ” he wrote on his Facebook page. “I am very much looking forward to coming home to my family and the great state of South Carolina! I digress and reflect on the discerning words of Forest Gump who said ‘I think I’ll go home now.'”

As ridiculous as it may have been, there’s no denying Michael Haley’s deployment has been a political gold mine for his wife.

“The deployment humanized the governor to the public from her tearful good-bye at his unit’s departure in January to the humorous story of locking herself out of the Governor’s Mansion in her robe,” reporter Andrew Shain of The (Columbia, S.C.) State newspaper wrote. “She used her Facebook page not only to post photos of her husband in Afghanistan but share messages of managing through his absence.”