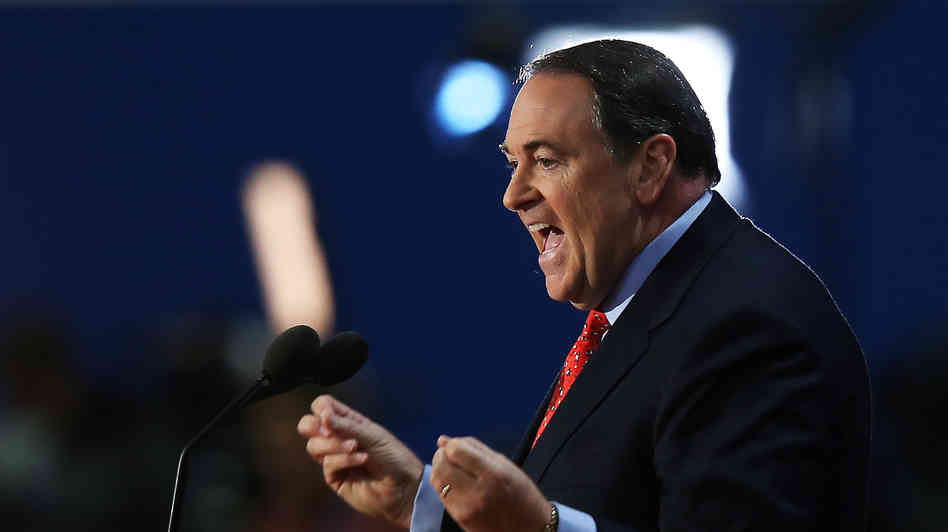 Former Arkansas Gov. Mike Huckabee – a social conservative with a weak record on free market and individual liberty issues – is the top choice of South Carolina Republican primary voters for president in 2016.

Or so says an automated poll conducted recently by Gravis Marketing …

Huckabee declined to seek the presidency in 2012 after winning the Iowa Caucuses (and finishing second in South Carolina to John McCain) in 2008.

“All the factors say ‘go’, but my heart says ‘no,'” Huckabee said of his decision not to run in last year’s election.

Anyway, according to the Gravis poll 18 percent of Palmetto State Republicans pegged Huckabee as their first choice in 2016 – putting him ahead of two other establishment GOP candidates, former Florida Gov. Jeb Bush (17 percent) and New Jersey Gov. Chris Christie (14 percent).

Sixteen percent of voters were undecided.

Hmmmm … if accurate, theses numbers would indicate South Carolina’s “Republican” electorate seems to be firmly in the pocket of the establishment wing of the party. At least for now.

This website has always viewed Huckabee as the worst of both worlds – totally unelectable as well as dead wrong on the dollars and cents issues that matter to us.

Huckabee’s electability hasn’t improved in advance of the 2016 race. For example he created a firestorm of controversy in the wake of last year’s elementary school shooting in Newtown Connecticut.

“We ask why there is violence in our schools, but we have systematically removed God from our schools,” Huckabee said. “Should we be so surprised that schools would become a place of carnage?”

The Gravis survey of 601 registered South Carolina voters was conducted between November 30 – December 2, 2013. Its margin of error is plus or minus four percentage points.

To take a closer look at its data for yourself, click on the link below …

Will Lindsey Graham Get 50 Percent?

I’d pay good money to see a Sumo match between Huckabee and Christie for the Neocon nomination.

Here’s the match up.

2016, the Year of the Also-Rans. Hillary Clinton and probably one or two other schmucks on the Democrat ticket that couldn’t make it through a primary before, and Santorum, Huckabee, and whatever other losers from previous GOP primaries on the Republican ticket. Just wonderful. Going to the polls anymore is like going to a thrift shop, except sometimes a thrift shop actually has something moderately useful.

Thanks be to God in the Highest that Huckabee’s last day on the radio is Thursday.

601 voters. I am sure that is totally representative of the populace.

The survey must have been taken in 5 Points – Saturday night – about 11:59 pm – just before the UglyBus arrived……

He’s the poster-child for everything that’s wrong w/the republican party.He’s mostly straight,but wants to squat on it and squirt ,while watching gay porn.I can spot ’em a mile away.

Not to hijack this thread, but South Carolina is tops with Louisiana among US states with the highest percentage of Google queries that begin “is my husband. . . .” followed by “gay?”

I remember seeing Huckabee in downtown Greenville around the time of the Republican primary. It was difficult to tell who he was talking to because he’s so damn cross-eyed.

I wish Huckabee would have ran in 2012, he would have beaten Romney and would have been a much stronger candidate against Obama. He would have driven up the white evangelical turnout (which was really low) as well as has centrist credentials like Chris Christie and put states like CO, OH, PA, IA and WI in play.

…and us sane Republicans would have stayed home.

Huckabee couldn’t get his shoe in the door.

Yeah, but Huckabee could easily get a shoe up his rectum. Then as Huckabee wouldn’t give the other guy the common courtesy of a reach around. You know I’m Right.

Not no but HELL FUCKING NO!!!!!!!! This pious piece of shit has the blood of four police officers on his hands and the rape of a thirteen year old girl.

He insisted on turning loose an armed robber because he was concerned about how young the robber was when he was given a lengthy and well-deserved sentence. His advisors warned him against that action but Huckabee wouldn’t take “no” for an answer. His little darling was released and went on to commit heinous crimes which included the murder of four cops and the rape of a young girl. Story had it that Huckster was moved by his “Christian values”, to show mercy on the lad.

Right on! These “God of second chances” idiots need a boot lodged in their asses.

Funny that someone who doesn’t believe in the “God of Second Chances” would be named Ester or Esther.

The Esther of the “Book of Esther” was orphaned at a young age, eventually became the Queen of Persia and saved the Jewish nation from destruction – an act now celebrated in the Jewish holiday of Purim..

I am personally pushing for Huckabee/Santorum 2016. These two represent the best the Republican Party has to offer.

“Stay tuned, there’s more to come,” he told listeners on his final day.