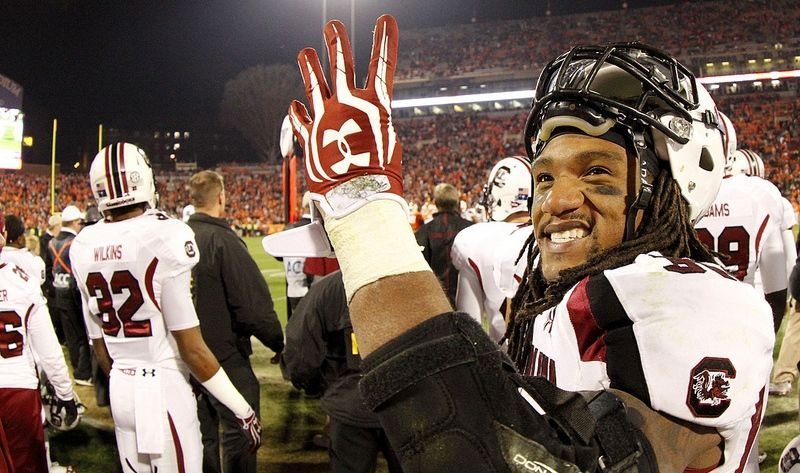 That tends to happen when someone gets shot under what can only be described as shady circumstances.

Here’s what we know. Miles was shot in the arm Monday afternoon by a yet-to-be-identified assailant. He did not want the police to be called. He reportedly changed his story several times after the police were called.

And multiple sources are suggesting the shooting was drug-related.

Those who know Miles best are incredulous at the allegation Miles was shot over a drug deal, though … and there’s something to be said for their perspective seeing as Miles has never been in trouble in the past and has been described as a “model student athlete” as well as a “hard worker” in his nascent professional career.

Also, Miles was vying for a coveted graduate assistant’s position with the Gamecock football program – a possible entrée into a coaching career.

Why would he put himself in such a situation?

“If you know Kenny at all, you know this is all bullshit,” a source who has worked with Miles in the past tells FITS.

“I guarantee you he’s protecting someone,” the source added, noting that Miles works with at-risk youth as part of his job with the S.C. Attorney General’s office. “People need to stop slandering a great guy.”

Sources close to the USC football program agree with that assessment.

“There is no way he’s into anything hard,” one source told us. “Every time I hang out with those guys he is acting like the responsible one when everyone else is getting sh*t-faced. Plus he has a good job, a sweet house in Irmo and he’s trying to coach with Steve Spurrier.”

Sources say Miles may have dabbled in marijuana … but honestly: What’s so bad about that? And when was the last time somebody got shot over a little weed?

So … what happened to Miles? Who shot him? And why?

And if he is trying to protect someone (other than himself) … who is it?

All good questions which are currently lacking answers …

A 23-year-old Lawrenceville, Georgia native, Miles rushed for 1,341 yards and four touchdowns during his career at South Carolina. He also had 416 receiving yards and caught one touchdown pass. Miles’ biggest game for South Carolina came in 2009 when he ran for 114 yards on just 17 carries against Clemson – leading the Gamecocks to a 34-17 win (the first of four consecutive victories in this rivalry series).

He needs to come clean with the Sheriff.

Charges should have been file against him for providing false information. But Lott is such a Gamecock homer, nothing will be done.

If I read correctly he did not file any charges and did not want the law called.

Unfortunately folks in power sell their souls to corrupt folks to save their positions! Look at Virginia. I have never been a Republican but vote mostly Republican because of the scum in the Democrat party. Now that there is no difference I may even quit voting. When Rino’s win that makes the Democrat Party winners!

If he is trying to protect someone, it will only hurt him instead.

I’ve been waiting for more details to come out about this but it seems as time goes on it gets more confusing. I wish we knew all the details.

Shifty is guessing that Kenny was going for a nooner with some guy’s wife, and he’s worried that that the husband may not miss next time…..

Maybe he was going for a nooner with her husband and he’s afraid the wife won’t miss , next time. I wonder if he’s a Lindsey supporter.

Drug Deal PERIOD. If he rats out the dealer, worse things will happen to him.

I do believe the pissed off Lott will not let go of this one. He doesn’t care for being made a fool which it appears he was fooled big time by the holy then thou former Gamecock.

Yeah, Leon was pissed. And did you see where some dumbass tried to swing on him later that day? While I may not be his biggest fan, he is one person I would not swing on if it could at all be avoided. That guy probably let Leon blow off a little steam that was building because of this BS.

So those who are buddies of his say nothing happened so they’re credible sources? Joe Biden says Obama is the greatest US President ever, does that mean he is?

Dabbed?? I bet he was dabbing. Just another dumb ass that can’t be helped.

Just another pot head. But working at the jockSniifer Alan Wilson’s office does add a wrinkle. Wonder how many jocks he has drawing a paycheck around there?

JockSniffers just can’t get enough of the young testosterone.

How else is Alan going to get to hand out with the “cool crowd”? There are pictures of him with his newest buddy Connor Shaw.

Given where he was wounded, how about he accidentally shot himself with a gun he shouldn’t have had, like one that could possibly be traced back to a robbery…?
The problem is when your first response when you see a cop is to lie.
At my mammy’s knee, my little white fanny was told you always confess and say ‘yes, sir’ and ‘no, sir’ when a cop asks you a question.

This is off subject, but since this relates to the AG’s office, Shifty wants to share this article from Alabama (my Mother’s home state) about what can be done when the AG has a bulldog like this guy and the will and the courage to turn him loose…………

This is about the ethics charges against Lowell Barron(D), the most powerful senator in Alabama who was defeated last election by an unknown, Shadrach McGill(R). Barron served for 25 years and could get away with anything he wanted to without repercussions (sound familiar?). Barron lives in my Mother’s home town in North Alabama (40 iles east of Huntsville). The author of the this article and the one above doesn’t pull any punches (SC needs someone like him).