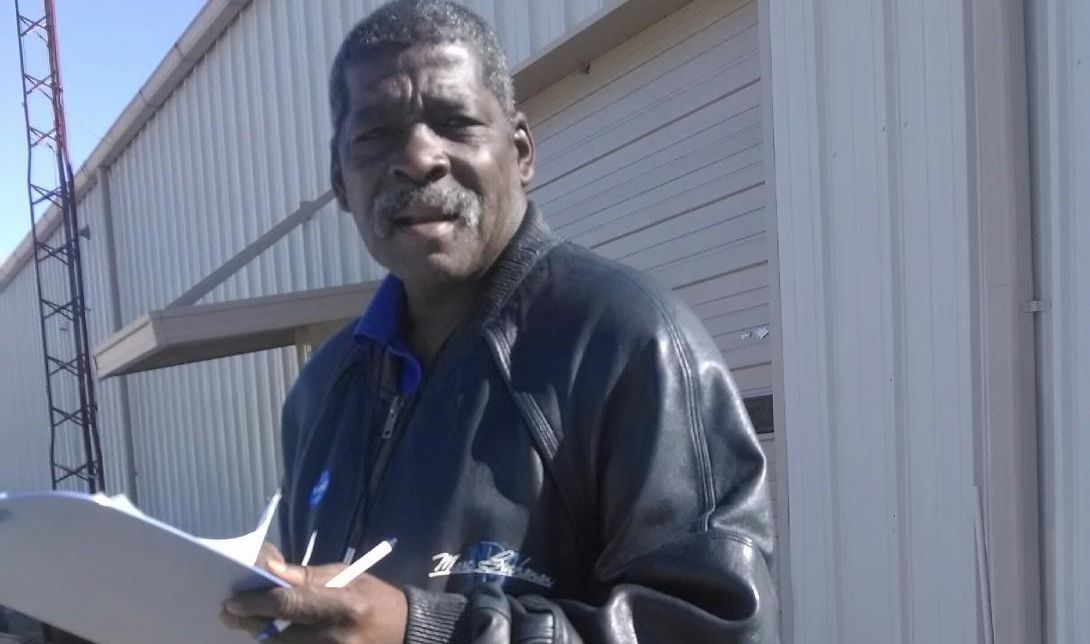 Yesterday, FITS reported on serious voting irregularities in the town of Swansea, S.C.

And nobody cared … because they don’t live in Swansea, S.C.

Still, if you’re looking for a case study in why rural South Carolina remains as backward as ever … Swansea is your town. In fact it appears as though the Lexington County hamlet is home to an especially brazen vote buying scheme – with public money.

The gentleman pictured (above) is John “Jimbo” Ziegler, brother of incumbent Swansea town councilwoman Linda Butler and a supporter of incumbent mayor Ray Spires (a.k.a. this genius).

What’s he doing with the pen and pad?

The same thing his councilwoman sister and Mayor Spires were doing (until Spires was forcibly removed from Swansea’s polling place).

What is “taking names?”

Hang on … we’ll get to that in a moment.

First, it’s important to get the lay of the land (to the extent that’s possible).

According to leaders of both political parties, Swansea’s city limits are about as well defined as the Eastern Front in the early days of Operation Barbarossa. No one is exactly sure which government controls what land … which makes it difficult to determine who is (and isn’t) eligible to vote in municipal elections.

“People who have voted as Swansea residents in the past were told this year they were no longer Swansea residents and could not vote,” Randy Herald, chairman of the Lexington County Democratic Party, told FITS.

In fact it’s much worse than that. At different times on election day, Swansea poll workers banned people from voting, accepting their ballots on a provisional basis and then permitted them to vote without verifying their names on the official database.

This “Wild West” mentality create an atmosphere ripe for corruption, and the ruling “elite” in Swansea appear to have taken full advantage.

According to our sources, Ziegler was bribing voters with cash payments as well as free water from the city.

“The Mayor has told voters if they signed up for new water and sewer they were automatically annexed into the town limits,” one source explained. “The expectation was simple: If you want free water – and maybe a little something extra – you show up and vote for the Mayor and his allies.”

Confronted by witnesses, Ziegler denied he was bribing anyone and claimed he was merely a “poll watcher.”

However multiple sources tell FITS they saw him hand items to voters outside the polling place.

“There was a carrot and a stick,” one source familiar with the operation tells FITS. “If they showed up to vote they got paid for their trouble. If they didn’t, they got their water turned off.”

Not only that, we’re told the Swansea police are said to have overseen the whole thing … and even exerted its influence on behalf of the incumbents.

In this confusing, corrupt environment Spires won reelection by a 127-91 vote margin over challenger Jerald Sanders … which is surprisingly close under the circumstances.

Not surprisingly, Sanders is protesting the race.

“Due to multiple voting irregularities I will contest the election results,” Sanders said in a statement provided to FITS.

So … will the U.S. Department of Justice (which claims to be a champion for the disenfranchised) investigate this flagrant violation of civil rights?

Don’t count on it … after all if the feds are content to let hoodlums in Richland County rob taxpayers of $1.2 billion, we doubt they’re going to give much of a rip about this small rural town.

Somebody’s About To Get Busted (Updated)

So, will there be investigations and (hopefully) arrests coming from this?

Thank You for exposing this, Fits. Hard to imagine this happening in this day and time without the backing of a powerful political machine like the one in Columbia/Richland County or the Lexington Crime Ring.

Seriously hoping it will.

I called you said the election committee asked the Hackett guy did he have 30 voters that he brought with him to say they tried and couldn’t or were forced to vote for someone else. Appealing right? Didn’t ask but what about the election commissioner on site? Heard he didn’t know either but but afternoon he did. Sorry but it sounds like Lexington Politics as usual. The Swansea Toilet Ring, sounds like it.

It is going to appeals. Love the Swansea Toilet Bowl Ring name. It is a fitting description. Hopefully we can ‘flush’ out the bad guys.

After all of the voter fraud talk, this is what you come up with? An angry fist full of anecdotes and innuendo concerning a contest of less than 125 voters in the podunct town of Swansea. Please.

Hey you. Its important to the people, all 835. Do you think the bad guys are just bad in Swansea? No, its wider spread than that.

Free water? Free WATER!?!? It used to be pints of whiskey and packs of Kools. How far we have fallen! The End of Civilization As We Know It is nigh…

It used to be pints of whiskey and packs of Kools.

Honestly, there were some real weirdos at Brennan Elementary yesterday, staring us down with the worst looks on their faces, one standing literally in the shadows with the same pen and paper deal. Not friendly, but scowling and weird. The woman at the desk with the laptop looked absolutely miserable, sneering and bored and like it was the most effort in the world to look our names up. Hudloan Devine had sent over a care package for the poll workers, with her name prominently written on the bag. guess we know who they work for. Gone apparently are the days of helpful professionalism at the polls. I’ll be volunteering next year, if Lillian McBribe will allow a white woman work at the polls. Based on what I’ve seen middle class whites are not a part of Benji’s ‘One Columbia’ propaganda.

NOBODY wrote in TBG???

TBG, sorry about that my friend but, well, you just aren’t ETHNIC enough! For example, it was once reported that a black, lesbian nun would be a shoo-in for president.

TBG, you may be interested this, and I’ll repost the previous two articles for you. Folks joke about write-in candidates but here is a story from Alabama. Lowell Barron(D) became the first write-in candidate for state senator to win. He became the most powerful senator in the state. He did many, many good things for his district (which includes a portion of East Huntsville). But he became greedy and arrogant and after serving 25 years he was defeated by an unknown upstart, Shadrack McGill(R) in the last election despite using dirty tactics. Today Barron is awaiting trial for ethics and campaign violations, among other juicy things. Here are the two articles…..

Oh, come on! They are just aspiring to be like Columbia and Richland County! Who are you to deny them buses with nobody on them, insane asylums turned to a high end hood (right across the street from low end hoods) and a water system millions in debt?

C’mon, Swansea! Show Columbia you can follow their lead!

You sonsofbitches really hate it when black people use tactics you originated, don’t you?

I think you know, asshole.
Some white guy was sitting in my precinct last election, not a poll worker, eyeballing voters. A Republican poll watcher, it turns out (I asked). I’m betting if I had taken his picture and sent it to Fits as an example of voter intimidation, it never would have seen the light of day.

I completely disagree. FITS was opposed to the photo ID voting law. You don’t know what you’re talking about.

I don’t think FITS has to worry. Hardly anyone checked and the ones they looked at were given just a glance.

Some white guy was sitting in my precinct last election, not a poll worker, eyeballing voters.

Jesus!
You shoulda got your daddy to smite him.

Pics or it didn’t happen.

Jesus H. Christ speaks the truth – and I dare any of you heathens to say otherwise!!

Hey the crooked mayor is white. The good guy is bad.

Actually a white mayor is manipulating black voters to vote against a black man running for mayor.

At least he’s not wearing a beret or carrying a night stick.

THAT, would have guaranteed him protection from USDOJ.

WASHINGTON (The Borowitz Report) — A new study released today indicates that Americans are safe from the threat of gun violence except in schools, malls, airports, movie theatres, workplaces, streets, and their own homes.

Plus: driveways, garages, gyms, stores, military bases — and a host of other buildings, structures, and sites.

National Rifle Association C.E.O. Wayne LaPierre applauded the study, saying that it reinforced his organization’s long-held position that the United States does not need additional gun laws. “This study makes it abundantly clear that Americans are in no danger of gun violence except in these isolated four hundred and thirteen places,” he said.

He added that he hoped that the study would spark a conversation “about the root cause of mass shootings: people who recklessly show up at places where they could be shot at.”

Those gun-free zones are so frickin’ safe, now aren’t they? Schools, military bases (how ludicrous), and other places. Active shooters stay away from thos places when plotting their evil deeds, don’t they?

This goes on all over South Carolina!

Time then to stop it.

The places that I for sure know of it going on is run by liberal Democrats and it is tough living where 90% of the population are Democrats and they have no compunction about cheating!

No compunction about cheating or lies or just about anything.

While I don’t think cheating is limited to Democrats, cause Republicans cheat almost equally as good. The answer is the same as hers. It is time to stop it.

wait just a minute…. is that… is that a BLACK man? I call *that* voter suppression. They won’t let me open carry into the voting booth,. but they let a BLACK man carry around a CLIPBOARD! The double standard here is stupefying!

Crooked election, crooked Mayor, crooked all the way around. Can we stop them? Vote them out, well try when the poll manager is a candidates Sister, her daughter in law and like the ugly guy in the pic, her brother. BUTTler is in Ray’s pocket. The ‘old yes man” Woodrow don’t even know what’s going on but on the take ohhhhhh yeah. So vote them out, why don’t the cops try arresting them?

Correction the poll managers in one precinct was all kin or connected to each other.