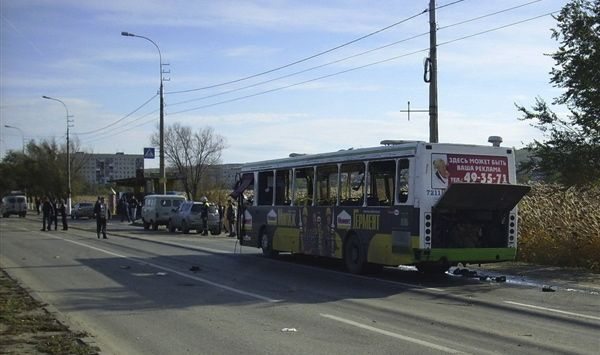 A female “black widow” suicide bomber detonated an explosive device on a Russian bus in the city of Volgograd early Monday – killing at least six people (including herself) and injuring more than thirty others.

“According to preliminary information, the self-explosion was carried out by a 30-year-old Dagestani native, Naida Akhiyalova,” Russian authorities said. “According to investigators’ information, the woman entered the bus at one of the bus stops and, almost right after that, the bomb went off. That is also confirmed by one of the passengers who survived.”

Akhiyalova is said to be married to a man with ties to Muslim extremists in the Northern Caucasus – who are fighting for independence from Russia.

“Black widows” (Shahidka) have been waging asymmetrical war toward that end since June 2000 – playing lead roles in a March 2010 Moscow subway attack that killed forty people as well as a January 2011 Moscow airport attack that killed another 35 people. They have also participated in much larger hostage-taking attacks – including a 2002 assault on a Moscow theater and a 2004 attack on a government-run school in North Ossetia.

Volgograd is located a few hundred kilometers north of Sochi – the site of the 2014 Winter Olympic Games (and a likely target of future attacks).

The bombing comes just three days after a pair of militants were killed in a blast outside of a mosque in the North Caucasus. According to authorities, one of their explosive devices detonated prematurely.