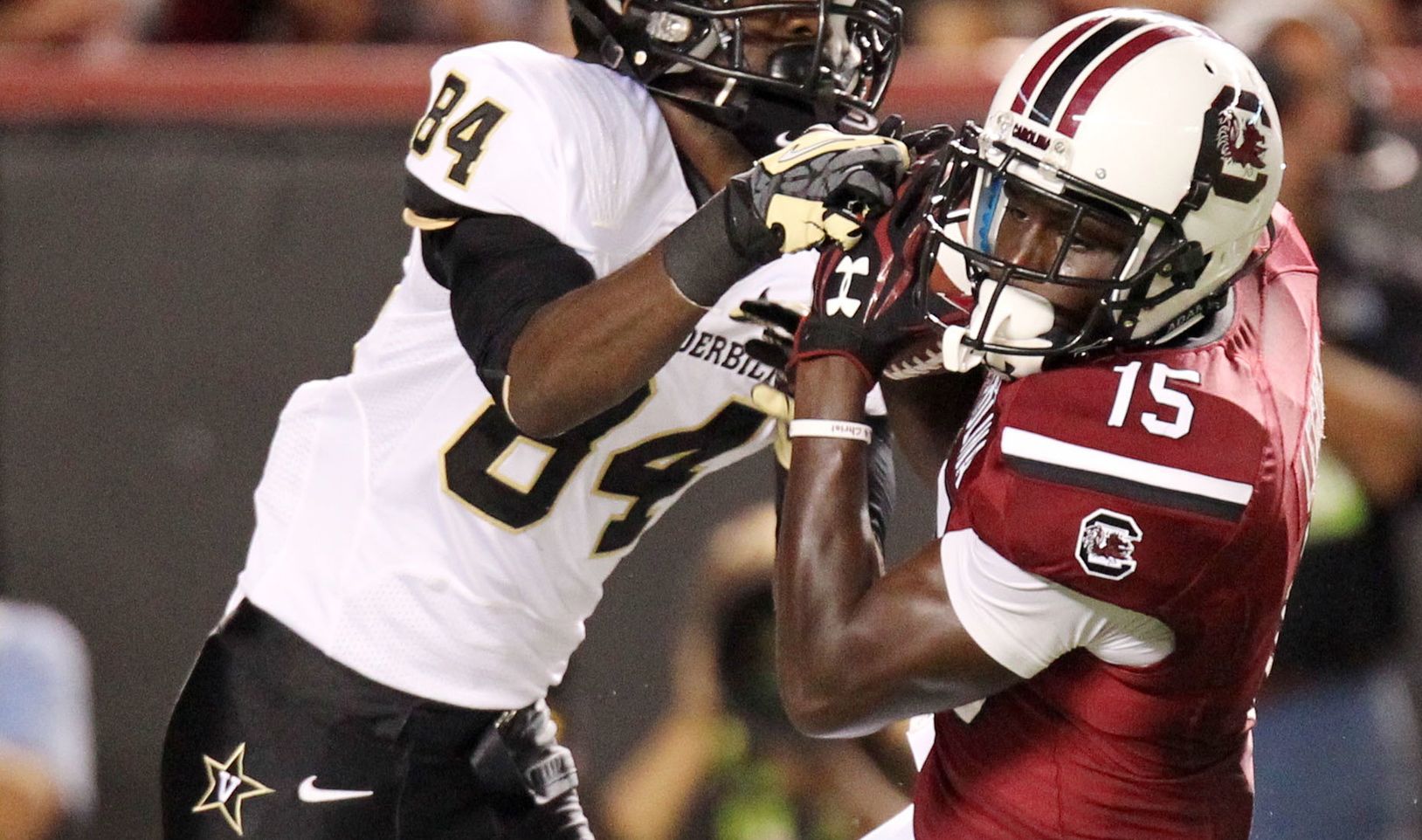 The University of South Carolina football team coughed up a 28-0 lead against unranked Vanderbilt this weekend … but managed to hang on for the win thanks to a late interception and some tough running down the stretch from its backup tailback.

The No. 13/14 Gamecocks (2-1, 1-1 SEC) were on their heels in the fourth quarter when the Commodores (1-2, 0-2 SEC) reeled off fifteen points in thirteen seconds to pull within two scores. Vandy was five yards away from making it a one-score game when senior cornerback Jimmy Legree intercepted a slant pass from Austyn Carta-Samuels with just under nine minutes left – giving head coach Steve Spurrier’s team the ball at the one-foot line.

South Carolina has now won five straight against Vanderbilt – while extending its home winning streak to thirteen games (the third-longest streak in the nation).

One-time Heisman Trophy frontrunner Jadeveon Clowney recorded his second sack in as many games against Vandy – and got his first forced fumble of the season. But the big star of the game was senior quarterback Connor Shaw – who threw for 284 yards and 3 touchdowns with no turnovers. Shaw also ran for another 84 yards on 19 carries – moving to 19-4 as South Carolina’s starting quarterback.

South Carolina scored touchdowns on its first four possessions of the game – drives of 42, 93, 76 and 92 yards.

“This might’ve been the best we’ve looked on offense since I’ve been here, in the first quarter anyways,” Spurrier said after the game.

Backup quarterback Dylan Thompson was perfect on his first drive of the game – but was picked off late in the first half and did not return. He completed seven of nine passes for 75 yards – while picking up another 23 yards (and a touchdown) running the football.

Sophomore tailback Mike Davis picked up 77 yards and a touchdown on 17 carries and hauled in three passes for 67 yards prior to injuring his ankle late in the fourth quarter. Davis’ injury was described as a slight sprain of his left ankle, and the team’s leading rusher (341 yards in three games) is not expected to miss any action.

The Gamecocks will take next Saturday off before traveling to Orlando, Florida on Sept. 28 to play Central Florida. The Knights (3-0, 0-0 AAC) made history this weekend by defeating a Big Ten team for the first time ever – vanquishing Penn State 34-31 on the road at Happy Valley.

Gamecocks Inch Up In Polls