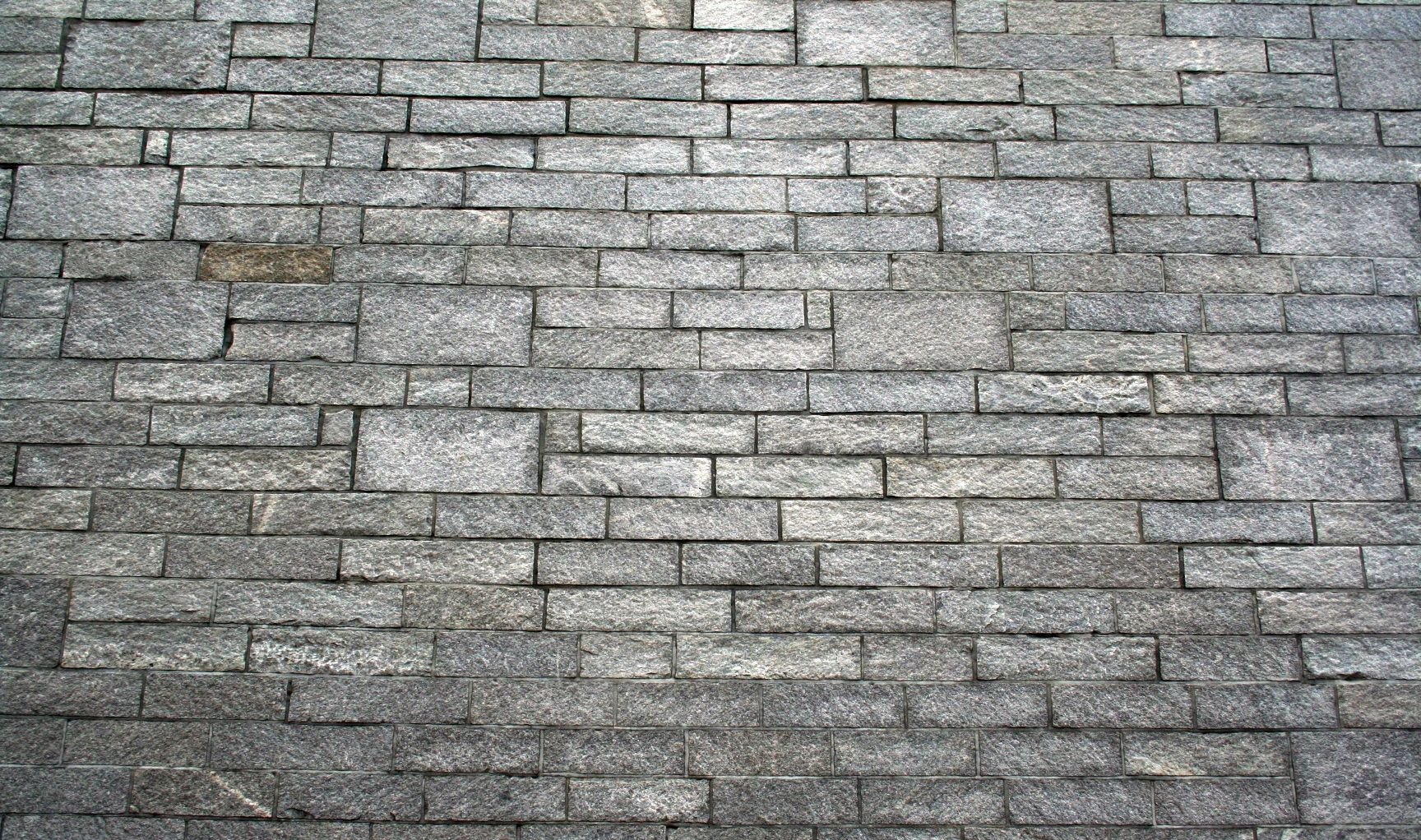 By now everyone knows the National Security Agency (NSA) is monitoring, saving and storing your digital communications (because you might be a terrorist or something).

Barack Obama and his “neoconservative” allies like U.S. Sen. Lindsey Graham tell you this isn’t happening … but they’re lying.

Billions of tax dollars are being spent on this effort, including an “all-seeing eye” in the middle of the Utah desert. And yes … they are tracking everything.

So … what happens when an American citizen wants to find out what Uncle Sam has uncovered in his unconstitutional snooping efforts? Glad you asked. Earlier this month, FITS was provided with a copy of a letter sent to a U.S. citizen who had the audacity to ask the government if it would share the information it had collected on him.

This citizen submitted a Freedom of Information Act (FOIA) request … and received an interesting response. 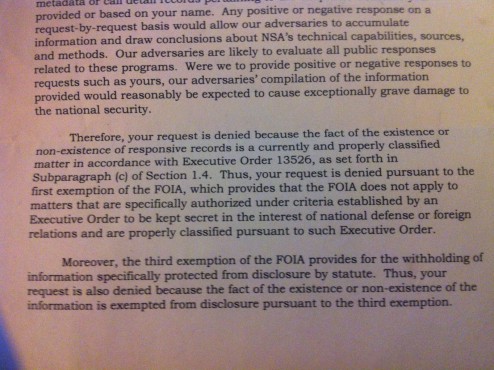 “Any positive or negative response on a request-by-request basis would allow our adversaries to accumulate information and draw conclusions about NSA’s technical capabilities, sources and methods,” the response states, later claiming such a response would “cause exceptionally grave damage to the national security.”

Based on what Obama promised, shouldn’t the correct response to any Freedom of Information Act (FOIA) involving the private digital communications of an American citizen be “we’re sorry we don’t have anything because we follow the U.S. Constitution and don’t invade your privacy like that.”

We have met the “adversary,” people. And it is our government.

Mande: On Columbus Day (And Other Stuff)

Simply question for you Sic:

Have you been asked(or told) to hand over any data on anyone posting here AFTER the last round of FBI stings on their internal ho scandal?

If you don’t answer, I will assume you can’t answer(gag order), and the answer is “yes”.

We don’t handle the comments. All comments are handled by Disqus.

And what do they do with the comments?

Just navigate around the Fitsnews site (and FreeTimes) to see how your comments are logged…………..

[2] A Russian magazine ran a contest for the funniest antigovernment joke. The first prize was thirty years.

How does Disqus store the data? Is it identified by origin?

it’s like that classic South Park episode about iTunes.

“Disqus
will disclose Personally Identifiable Information where required to do
so by law or subpoena or if we reasonably believe that such action is
necessary to (a) comply with the law and the reasonable requests of law
enforcement; (b) to enforce our Terms of Service
or to protect the security or integrity of our Service; and/or (c) to
exercise or protect the rights, property, or personal safety of Disqus,
our Users or others.”

OK big boy, now what? Disqus will roll over in a microsecond to LE.

Simple problem, use a burn ID to establish you account.

Even simpler. Don’t use Disqus

And we are their adversaries. Any assertion otherwise is all smoke and mirrors.

When in the Course of human events, it becomes necessary for one people to
dissolve the political bands which have connected them with another, and to
assume among the powers of the earth, the separate and equal station to which
the Laws of Nature and of Nature’s God entitle them, a decent respect to the
opinions of mankind requires that they should declare the causes which impel
them to the separation.

We hold these truths to be self-evident, that all men are created equal, that
they are endowed by their Creator with certain unalienable Rights, that among
these are Life, Liberty and the pursuit of Happiness.–That to secure these
rights, Governments are instituted among Men, deriving their just powers from
the consent of the governed, –That whenever any Form of Government becomes
destructive of these ends, it is the Right of the People to alter or to abolish
it, and to institute new Government, laying its foundation on such principles
and organizing its powers in such form, as to them shall seem most likely to
effect their Safety and Happiness. Prudence, indeed, will dictate that
Governments long established should not be changed for light and transient
causes; and accordingly all experience hath shewn, that mankind are more
disposed to suffer, while evils are sufferable, than to right themselves by
abolishing the forms to which they are accustomed. But when a long train of
abuses and usurpations, pursuing invariably the same Object evinces a design to
reduce them under absolute Despotism, it is their right, it is their duty, to
throw off such Government, and to provide new Guards for their future
security.–Such has been the patient sufferance of these Colonies; and such is
now the necessity which constrains them to alter their former Systems of
Government. The history of the present King of Great Britain is a history of
repeated injuries and usurpations, all having in direct object the establishment
of an absolute Tyranny over these States. To prove this, let Facts be submitted
to a candid world…
http://www.archives.gov/exhibits/charters/declaration_transcript.html

TL;DR: Because TERRORISM! You don’t want to give away our secrets do you? Or DO you? TERRORIST!

You’ve been reading Orwell and Huxley recently, haven’t you?

I went through a five month FOIA process with the Dept. of Labor to get information on the payment of sub-minimum wages by Goodwill Industries to disabled employees. There is a provision of the Wage and Hour Act which allows this if the certification process through DOL is followed. Last summer, the National Federation of the Blind discovered that 64 of 165 Goodwill franchises were paying as little as 22 cents per hour to their disabled employees.

When I followed through to find out if my local Goodwill was amongst those paying sub-minimum wages I was stymied and refused anything resembling current information. There was no national security issue here…just a big government agency deciding to screw around with someone who couldn’t afford an expensive attorney to enforce their adherence to the law.

Lets start a nationwide go off the grid movement and drive them nuts. Read this NSA.

That would make their jobs easier. In theory, providing you aren’t one of their lovers, in the middle of their finical interests or under the 3 hops rule, going off the grid means nothing. You are just chaff.

Now if you really wanted to drive someone nuts, just get 4 or 5 grandmothers to start using some kind of reasonable encryption on their email and most importantly get them to get their friends to do this and then their friends. Imagine the kilowatt hours burned if only 15% of America’s grannies started encrypting their email forwards? Signal to noise.

Not that I’d advocating this of course.

Actually, we should all be using encryption in our communications as a matter of course. The list of Bad People is not limited to the NSA.

TBG would also never advocate such a strategy, especially on a Disqus forum. In fact, TBG would like to offer a laurel, and hearty welcome to our new NSA overlords.

No, include the words “anthrax, jihad, Allah, bomb etc.” in every email and overload the system…

9″ if facebook, twitter, or google has the ability to throw me in jail, or have me put to death for preceived violations of their policies – which mind you take place in a court they would run – OR if google, twitter or facebook, all of which I can choose not to use, could go to a “secret court” and obtain a “secret warrant” to do a “sneak peek” warrant into my home, office or vehicle,if they wanted additional information, or to seize my property, maybe I’d give more of a shit. Also, if I actually funded any of these companies or services involuntarily through manadatory donations, I might give more of a shit. As it stands, the only one that meets that definition is the government. Therefore, I do give a shit.

Gee whiz. I know all there is to know about me. #FloriDHuh

Wanna bet? Apply for a security clearance some time, you’ll learn all kinds of things about yourself that you didn’t know.