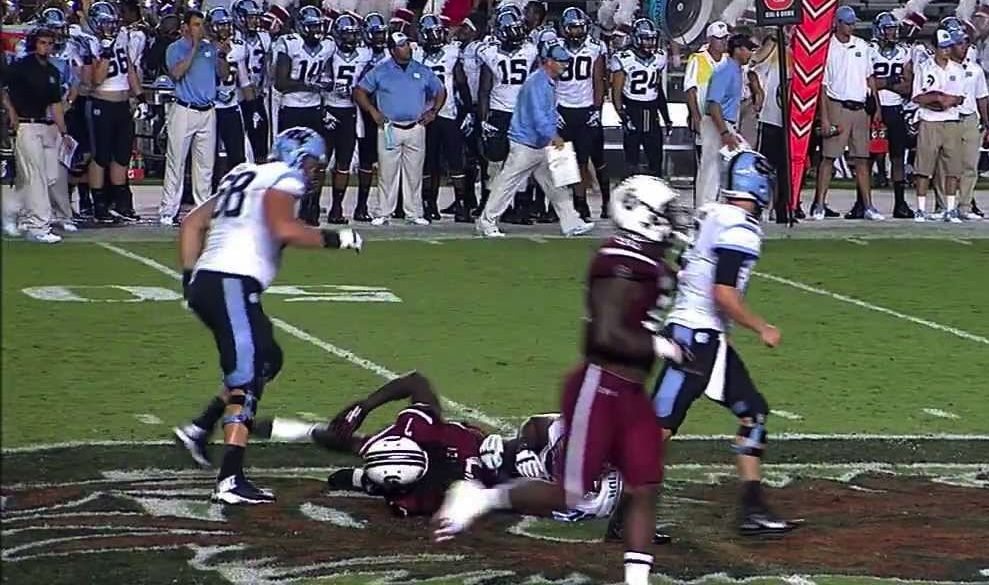 The play occurred on the Tar Heels’ first drive following a nearly two hour weather delay – which means the stadium was nearly empty when it happened.

For those of you who missed it, take a look at this .gif (via SB Nation) …

Yeah … that could have very easily been a season ending leg injury for Clowney.

Holts was flagged for an illegal block on the play, but he should have been thrown out of the game. And we believe he should be suspended for the Tar Heels’ home opener against Middle Tennessee State on September 7.

ESPN’s announcing team correctly labeled the play as dirty, and some UNC fans agree with that assessment.

“It was a cheap shot, and could have potentially injured Clowney,” one wrote on a Tar Heel message board. “I’d be in favor of (North Carolina coach) Larry Fedora setting an example that our program does not find that acceptable.”

Fedora should set that example, but if he doesn’t the ACC – or the NCAA should set it for him.

Oh … it’s worth noting North Carolina fans were outraged a year ago when a Duke University lineman did virtually the same thing to one of their players.

What do you think? Vote in our poll and post your thoughts on Holts’ cheap shot in our comments section below …

Johnny Football Gets Off