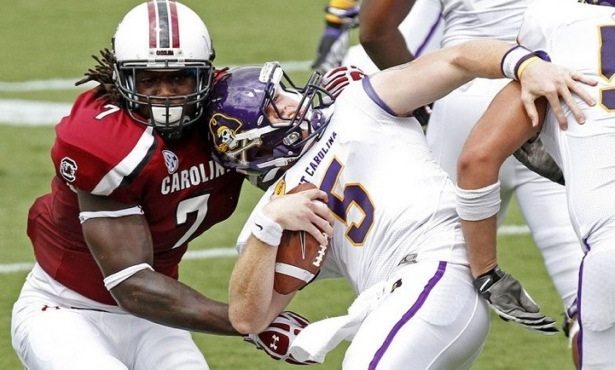 The 6-foot-6, 274-pound defensive end – who is attempting to become the first defensive player since Charles Woodson in 1997 to win the award – was ranked ahead of Ohio State quarterback Braxton Miller, Texas A&M quarterback Johnny Manziel (the 2012 award winner) and Alabama quarterback A.J. McCarron.

“Clowney is the most disruptive player in college football,” the website noted.

Clowney, 20, finished sixth in the Heisman voting a year ago after recording 23.5 tackles for losses and 13 sacks (both school records) as a sophomore.

“What a joke,” we wrote at the time. “Clowney is the best college football player in America. Period. Paragraph. End of story.”

Finding that out the hard way right now? South Carolina’s offensive linemen, who have been struggling to contain Clowney in practice.

South Carolina opens its 2013 season next Thursday at home against the University of North Carolina. Kickoff is at 6:00 p.m. EDT, with ESPN televising the game nationally.

Do Not Doubt Marcus Lattimore