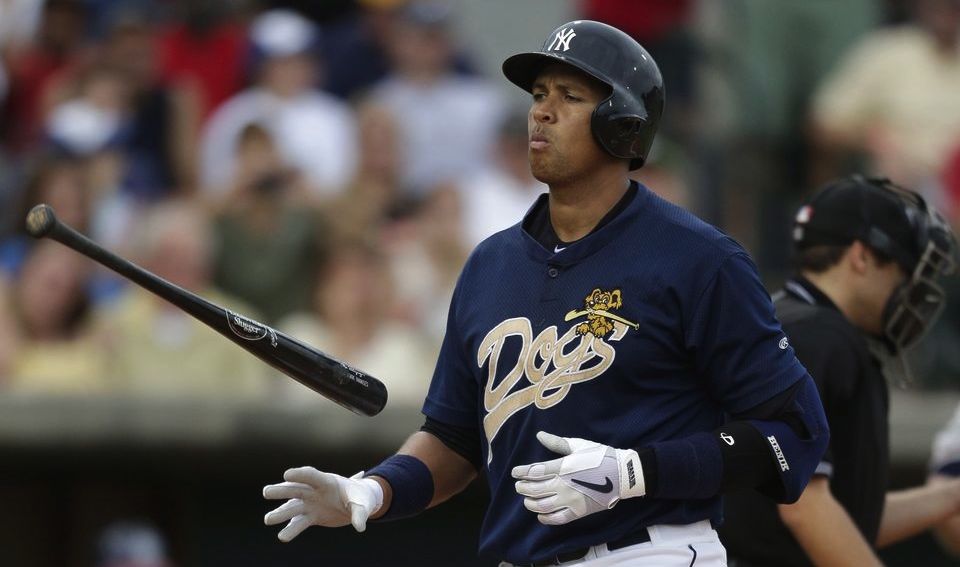 New York Yankees third baseman Alex Rodriguez went hitless in two at bats for the Charleston, S.C. River Dogs – grounding into a double play and striking out looking in his first two plate appearances since being sidelined in 2012 with a hip injury.

The veteran slugger – who ranks fifth on the all-time home run list (and first among active players) with 647 career long balls – will play one more game with the River Dogs before the Yankees move him up. If all goes according to plan, “A-Rod” will be in pinstripes in the Bronx by the end of the month.

According to CBS Sportsline, Rodriguez is owned  in 41 percent of fantasy baseball leagues – up from 33 percent last week.

An admitted steroid user, we’ve got little use for Rodriguez – although our founding editor has scooped him up as a backup for his fantasy baseball franchise, the FITS Lollygaggers.

As far as we’re concerned, the home run records of Rodriguez, Barry Bonds, Mark McGwire and other steroid-enhanced players don’t count – at least not the statistics they accumulated while juicing.

We wish “A-Rod” the best in his recovery, obviously, but he’s forever tainted in our book …