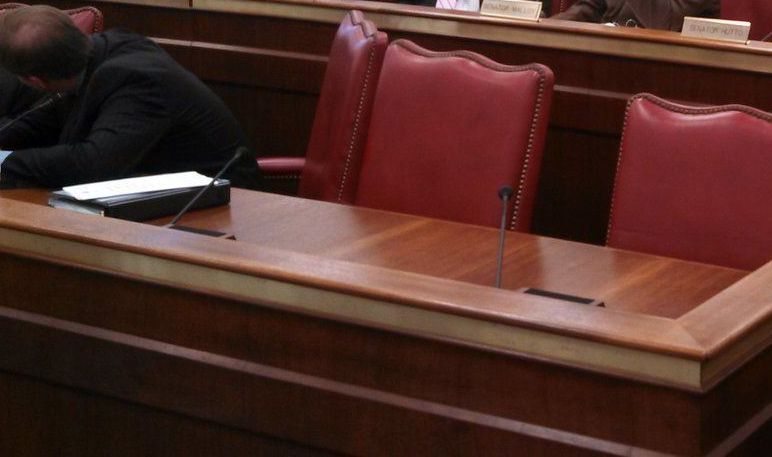 Among those in attendance? One Eric Sox, then a trooper with the S.C. Highway Patrol. In fact according to multiple witnesses, Sox was incredibly “over-served” at this particular glorification of atonality and inbrededness. In fact he is alleged to have delivered several “one fingered salutes” to Columbia, S.C. police officers and members of the University of South Carolina police department who attempted to address his severely inebriated state.

Sox was arrested and charged with “public drunk.” And fired from his job. Sort of what you’d expect in that situation, right?

Right … but our story doesn’t end there.

According to our sources, Sox – whose case is set to be decided this week – went to his future father-in-law, S.C. Rep. Kit Spires (R-Lexington) and asked for help.

What happened next? Spires – who from the very beginning should have told his future son-in-law “sorry Eric, there’s nothing I can do for you” – took the bait.

Specifically, multiple sources at the S.C. State House tell FITS the Lexington lawmaker went to Columbia, S.C. mayor Steve Benjamin with a deal – get rid of the charges against Sox and he (Spires) would support Benjamin’s reelection campaign and work votes in the S.C. General Assembly on behalf of the renomination of Benjamin’s wife, DeAndrea, as a circuit court judge.

Amazingly, this brazen corruption is just the beginning of Sox’s sordid tale …

The former trooper – who also boasts S.C. Gov. Nikki Haley and U.S. Rep. Joe Wilson among his network of allies – was caught red-handed having an extramarital affair with the wife of a deputy in the Lexington County (S.C.) Sheriff’s Department. In fact he impregnated this woman – who recently gave birth to his child.  Of course the professional misconduct complaint filed by the deputy against Sox with the S.C. Department of Public Safety (SCDPS) – the agency which oversees the Highway Patrol – was completely ignored.

Ready for the kicker? Cox’s attorneys – who were secured for him by Spires – are accused of working in concert with the city to have a faulty discovery report submitted to the court, creating the impression there was some sort of “officer mistake” in the case against Cox.

How’s that for “justice?”

Obviously we have no problem with people getting drunk and having affairs. And there’s plenty of leeway when it comes to the amount of trash you can talk – and the number of fingers you can extend – to law enforcement officers.

But this guy was a cop … and the people bending the system to his advantage are public officials who are supposed to uphold the law impartially.

And according to our sources they are celebrating a “certain” legal victory and Cox’s reinstatement to his old job with full pay and benefits … any day now.

Do all Lexington County residents really think Kit Spires is going to go to these lengths to protect them? Of course not …

Once again in South Carolina, the outcome of a legal case apparently has little to do with the law or mitigating circumstances surrounding a specific incident … and everything to do with whether the guilty party has political connections. And the truly sad thing about that? It happens dozens of times every single day in this ass backward state.