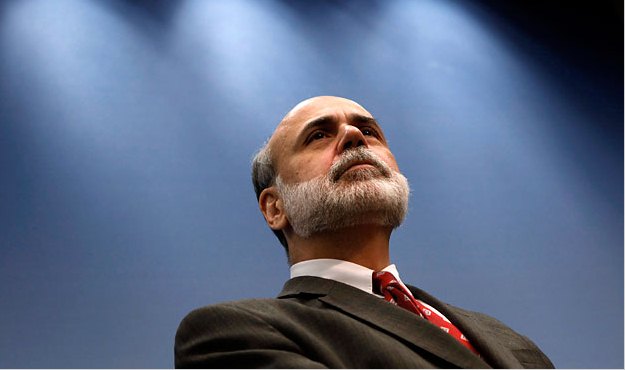 Like most of the crappy decisions that have come out of Washington, D.C. this millenium, Federal Reserve chairman Ben Bernanke is both parties’ fault.

Last September the Fed agreed to create additional new assets (i.e. printed money) at a rate of $85 billion a month – with no end date. This decision was reached after three previous rounds of money-printing failed to provide sufficient “stimulation” to the economy.

Has any of this worked? No. Each round of money-printing causes what our friend Tyler Durden at Zero Hedge calls “ever-deeper systemic weakness” in the American economy, which in turn “forces the Fed to intervene even more aggressively in an attempt to counteract, in turn generating ever more economic weakness, leading to even more intervention.”

Adding his voice to the mix is PIMCO’s Bill Gross, who hits the nail on the head in a column addressed to Bernanke.

“It’s been five years Mr. Chairman and the real economy has not once over a 12-month period of time grown faster than 2.5 percent,” Gross writes. “Perhaps, in addition to a fiscally confused Washington, it’s your policies that may be now part of the problem rather than the solution. Perhaps the beating heart is pumping anemic, even destructively leukemic blood through the system. Perhaps zero-bound interest rates and quantitative easing programs are becoming as much (part) of the problem as the solution.”

Bernanke’s policies – along with Obama’s welfare statism – have indeed created a “wounded heart” American economy, one in which any hope of a real recovery was dashed by reflexive overreaction in our monetary policy. And not only is there no “opposition” party to these policies, the so-called “Republicans” are the ones who put Bernanke in charge.

The only question? When does the heart stop pumping altogether …