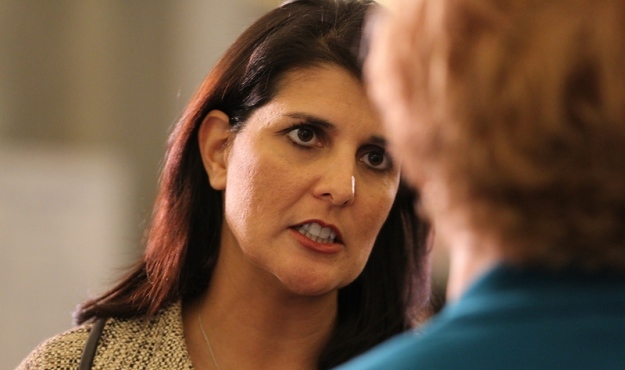 It doesn’t happen often on the national stage, but “rising star” S.C. Gov. Nikki Haley is the subject of a not-so-flattering national news story in Sunday’s editions of The Politico.

“(Haley) rode into office in 2011 on a Republican wave as the first female and first Indian-American governor of the state — a rising GOP star with national potential,” the article begins. “Two-and-a-half bruising years later, she has a fight on her hands just to get reelected.”

Written by Emily Schultheis, The Politico story is a lengthy read that focuses extensively on the #SCHacked scandal – a massive security breach that occurred last year at the S.C. Department of Revenue (SCDOR). Along with Haley’s infamous “Savannah River Sellout,” #SCHacked is one of two body blows Haley’s administration has sustained.

Beginning last August, Haley’s agency coughed up 3.8 million Social Security numbers, 3.3 million bank account numbers, tax info for more than 650,000 businesses and nearly 400,000 credit and debit card numbers to as-yet-unidentified hackers. Haley’s agency never even knew it had been hit – in fact it wasn’t until mid-October that federal law enforcement officials informed the state its system had been compromised.

How did she manage the crisis once it broke? Not well …

Haley initially claimed that “there wasn’t anything where anyone in state government could have done anything” to stop the breach – and that the Palmetto State used “industry standard” data security methods. Both of those claims turned out to be completely false.

“People will figure out that she handled that as well as it could be handled,” Connelly told Schultheis, adding that the breach was “something that could have happened on anyone’s watch.”

That’s one of the silliest statements we’ve heard in some time, people. Of course Connelly can be counted on to say whatever Haley’s campaign tells him to say, so it’s not surprising to hear him parroting the “party line.”

Where Schultheis gives Haley credit (curiously) is on the jobs front – specifically Haley’s oft-repeated claim to have created more than 30,000 new jobs over the last two-and-a-half years.

“Haley has scored some important wins on jobs and the economy that could stand her in good stead when she asks voters for another four years,” Schultheis notes, referring specifically to a recent announcement by aircraft manufacturer Boeing.

The problem(s) there? Most of Haley’s big economic development wins have been taxpayer-funded … and despite her “success” blowing incentive money on select corporations, there is the small matter of South Carolina’s labor participation rate.

At an anemic 58.6 percent, it’s at its lowest level ever – nearly five full percentage points below the national rate, which itself is at a 34-year low.

Is one quarter of one percent a “large portion” of the budget? We think not …

Bottom line? One negative national news story isn’t going to dim “Haley’s Comet,” which continues to burn brightly among the national “conservative” media … but the more people start digging into Haley’s gubernatorial record (and her pre-gubernatorial )the less they’re going to like it.