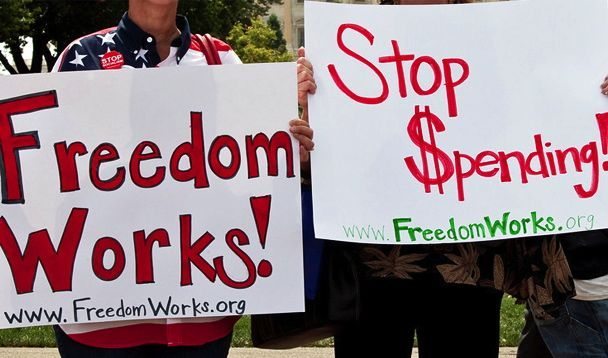 Rebuked by the national Republican establishment, former S.C. Gov. Mark Sanford has been actively engaging the fiscal conservative, pro-liberty movement in an effort to generate grassroots and financial support for his flagging comeback campaign.

Unlike the rest of his campaign, pretty well actually …

Last week Sanford was endorsed by former U.S. Rep. Ron Paul – Godfather of the modern liberty movement – and earlier this week he received the endorsement of Paul’s son, U.S. Sen. Rand Paul (R-Kentucky). Also weighing in on his behalf this week? The political action committee for FreedomWorks, a conservative non-profit advocacy group based in Washington, D.C.

“Mark Sanford will be a consistent vote to get spending under control, pass a balanced budget amendment to the Constitution, repeal and replace ObamaCare, and make the tax code fairer and simpler for all Americans,” FreedomWorks’ CEO Matt Kibbe said in a statement announcing his group’s endorsement. “FreedomWorks PAC activists across the District support Mark Sanford and we will be taking action in this final week to make sure Mark Sanford represents (first district) taxpayers in Washington.”

FreedomWorks says its Southeast regional field coordinator Allen Page will be working with first district activists through Election Day putting out signs, knocking on doors, and assisting in get-out-the-vote efforts – including a “Super Saturday Get out the Vote” event scheduled for May 4. Whitney Neal, the organization’s grassroots director, will also be traveling to South Carolina to help rally support for Sanford’s bid.

After trespassing allegations leveled by his ex-wife’s lawyers fanned the flames of his infamous 2009 fall from grace, Sanford saw a modest lead over Democrat Elizabeth Colbert-Busch turn into a nine-point deficit almost instantaneously.

And while it appears as though Sanford has eaten into Colbert-Busch’s lead over the past week, he is still trailing according to a pair of internal polls conducted just prior to this week’s first district debate.

Stay tuned for our report on those surveys momentarily …