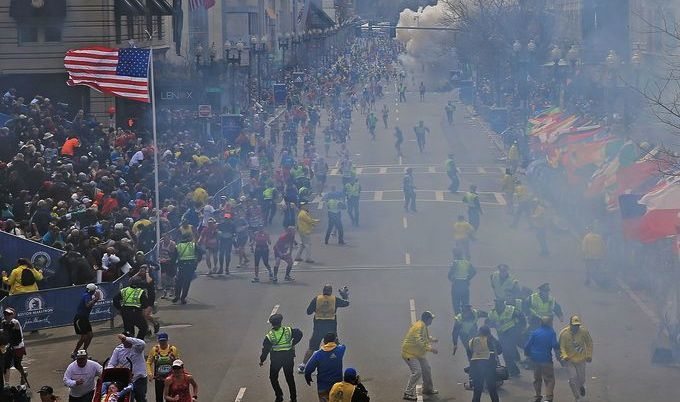 The bombs that killed three people and injured dozens more in downtown Boston, Massachusetts this week were “rudimentary” pressure cooker devices filled with ball bearings and severed nails, according to a new report from the Associated Press.

These six-liter “pressure cookers” were then placed on the ground inside black duffel bags packed with shrapnel. “Pressure cooker” bombs have been linked to previous terror plots, including an attempted bombing at Fort Hood by a Muslim soldier. In fact al-Qaeda has posted “recipes” for these bombs online.

The two bombs used in the attack detonated approximately 100 yards apart from each other – one twelve seconds after the other – near the finish line of the 2013 Boston Marathon, the world’s most prestigious road race.

The impact of the blast sent shrapnel – and human body parts – flying through the air.

So far no terrorist organization has claimed responsibility for the attack, and the federal government’s only reported lead in the case was a Saudi national who received medical attention in the wake of the bombing. However the “Saudi national” story – originally published by the New York Post – has been denied by law enforcement.

Meanwhile there are, predictably, voices from the professional left looking to pin the blame for the blast on “right wing extremists.”

“If it was more conventional explosives, which are much harder to get a hold of now, that might be some other kind of right-wing extremists,” CNN analyst Peter Bergen said in the immediate aftermath of the attack.

Agents with the Federal Bureau of Investigation (FBI) and U.S. Department of Homeland Security (DHS) have conducted a search of an apartment in downtown Boston and were observed removing brown paper bags, trash bags and a duffel bag.

“We will go to the ends of the earth to identify the subject or subjects who are responsible for this despicable crime and we will do everything we can to bring them to justice,” an FBI spokesman said.

Meanwhile evidence is emerging which suggests that government officials had prior knowledge of the attack – despite their protestations to the contrary.

Prior to the bombings, multiple announcements were made alerting spectators to a security “drill” taking place at the event.

“They kept making announcements to the participants do not worry, it’s just a training exercise,” a cross country coach from Mobile, Alabama told Boston’ Local 15. “It seemed like there was some sort of threat, but they kept telling us it was just a drill.”

Also, bomb sniffing dogs were reported at the start and finish lines of the race prior to the detonations.