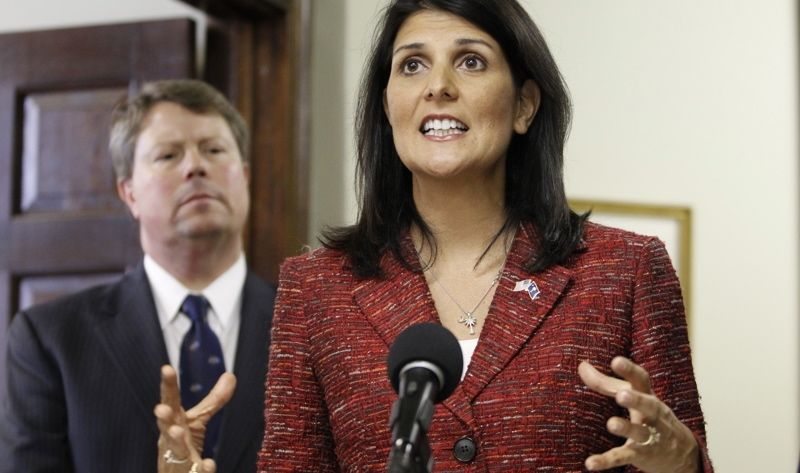 S.C. Gov. Nikki Haley has $2 million in the bank in her bid for reelection, according to documents filed this week with the S.C. State Ethics Commission.

Among her most controversial contributions? A $1,500 check from Ed Giobbe, her status quo appointee to the S.C. Retirement System Investment Commission (SCRSIC). Last month Giobbe led an effort to censure S.C. Treasurer Curtis Loftis – the only member of the board pushing for transparency and reform of the underperforming fund. In fact ever since Haley appointed him to this board, Giobbe has been voting against the best interests of taxpayers – most notably keeping corrupt commission chairman Reynolds Williams at his post despite an ongoing criminal investigation into Williams’ self-serving deals.

Curiously, Giobbe ponied up to Haley’s campaign a few weeks after we called on Haley to dismiss him …

Also of note aircraft manufacturer Boeing – which is about to receive another multimillion dollar subsidy from the state – ponied up $2,500 to Haley’s campaign. Meanwhile “Government Motors” political action committee pitched in with $1,000.

Another controversial contribution came from Georgia attorney Eric Tanenblatt – who helped organize a fundraiser for Haley in the wake of the “Savannah River Sellout,” her controversial decision to support a government-funded Georgia port project at the expense of a private sector port in Jasper County, S.C.

On the expense side Haley paid her top advisor – former chief of staff Tim Pearson – $16,000 during the first quarter. Her fundraiser, Marisa Crawford, received $20,000. Haley also paid $10,000 to a Texas company as a “fundraising expense” – part of another major cash haul from the Lone Star State.

Haley received a whopping 48 contributions from Texas-based companies – most of them insurance firms – during the last quarter. How much money are we talking about? Roughly $90,000 – most of it received toward the end of last month.

Meanwhile Haley’s 2010 opponent – S.C. Sen. Vincent Sheheen (D-Camden) – opened a 2014 campaign organization with a $500 check from himself. Sheheen announced his plans to run for governor again earlier this week.

Kana Rahman: The Rest Of The Story